Blue Origin, the rocket company owned by Amazon's Jeff Bezos, has revealed the first images of its reusable passenger capsule, due to take tourists to space next year.

The 'New Shepard' capsule's roomy interior includes seats for six travellers, who will be treated to views from the 'largest windows in space'.

The include reclining black seats with blue piping, and seats emblazoned with the Blue Origin feather logo. 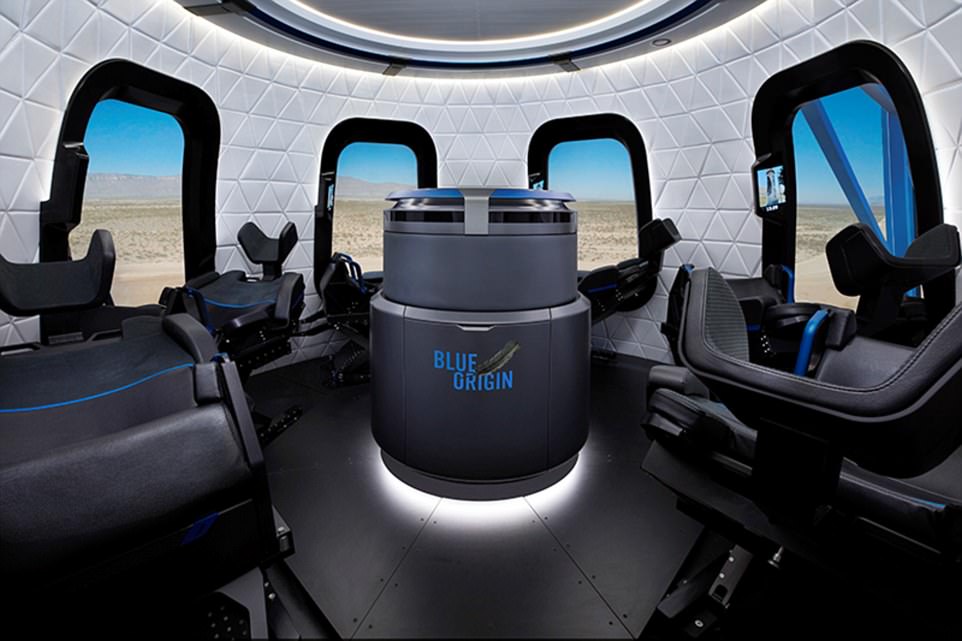 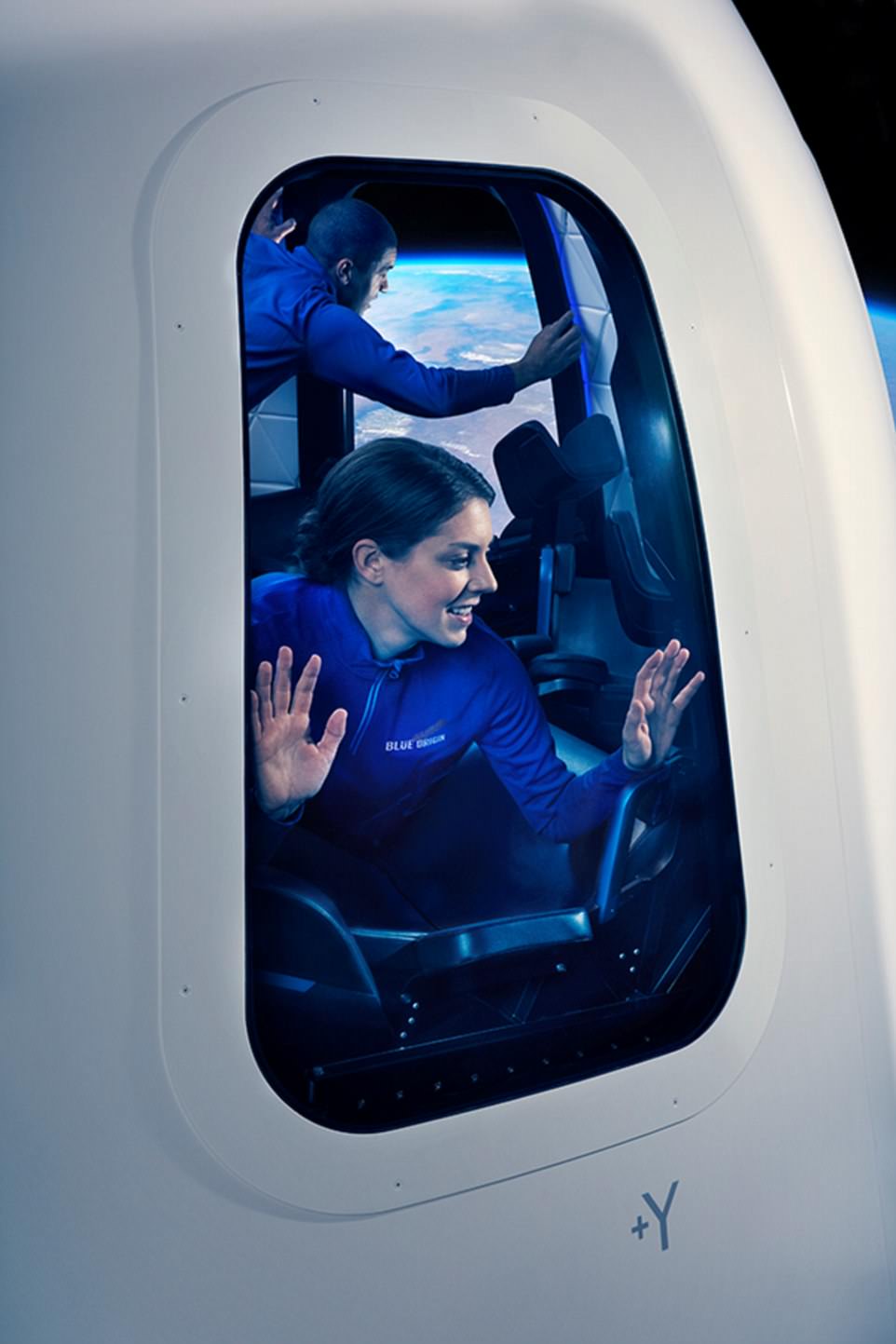 Whatever you think of Bezos and Musk, you have to say they're on the cutting edge of technology. Musk is talking about a Neuralink which is a brain/computer interface and also Space X.

The Private space race is on.

Here's a recent article on CNBC.

China's secret plan to crush SpaceX and the US space program

China's breakneck economic expansion may be flagging, but the country's ambitions in space show no signs of slowing down. Alongside ongoing efforts to rival NASA by placing robotic landers, and eventually astronauts, on the moon and Mars, China's government is increasingly looking to its burgeoning space sector to rival U.S. companies like Jeff Bezos' Blue Origin and Elon Musk's SpaceX, which is targeting March 30 for the latest launch of its Falcon 9 rocket.

Space tourism is here and we live in some exciting times in terms of technology.

Pretty, but glass, pressurized from within and struck by fast-moving debris has particular mechanical failure issues.

Pretty, but glass, pressurized from within and struck by fast-moving debris has particular mechanical failure issues.


And reading is your friend too


Every seat on the flight will have access to a large window, which the company says is made of multiple layers of fracture-tough materials.

Blue Origin, the rocket company owned by Amazon's Jeff Bezos, has revealed the first images of its reusable passenger capsule, due to take tourists to space next year.

2018 will go by and the thing will still be on the ground.

posted on Mar, 30 2017 @ 07:05 AM
link
Taking note, I really want this whole space tourism stuff to take off so I can put the Flat Earth theory to rest. Let's hope this also doesn't get delayed. (and delayed. and delayed) Looking at u, Musk.

This "New Shepard" rocket and capsule that the article mentions could fly next year will only go to 100 km altitude and come back down, making it a sub-orbital flight.

The "New Glenn" rocket would be able to reach an orbital trajectory, but the article say that is years away. Plus, I don't think they have any idea for an estimated date that tourists will be taking orbital flights launched by the "New Glenn" launch vehicle.

Edit to add --
By the way, I don't think the names "New Shepard" and "New Glenn" are accidental.

Alan Shepard was the first American in space, but his flight was sub-orbital -- just like the flights of the "New Shepard" rocket and capsule.

John Glenn's flight came after Shepard's but he was the first American to orbit -- just like the flight of the "New Glenn" rocket.

posted on Mar, 30 2017 @ 10:53 PM
link
Well, the sub-orbital flight is the only explanation for those large windows. They'd be a real trouble in Low Earth Orbit.

originally posted by: humanoidlord
oh god i hate this another way to rich assholes to shown how they are better than everyone

Wouldn't it be nice if they raffled off a seat now and again and gave the proceeds to charity?

originally posted by: Subterranean6
a reply to: wildespace

I realise you're one of the more ignorant members, thinking that 'organic matter' meant some sort of baryon made of organics, as though this was the same as organic chemistry and compounds,


I'm not sure what you exactly mean by this, considering wildespace did not mention organic matter in his post, so I assume you are talking about some other post from him. However, from my experience with wildespace on ATS, he (or she) seems to understand what "organic molecules" means. I would NOT characterize wildespace as ignorant on this or many other ATS topics...


...But back to the topic of this thread:

originally posted by: Subterranean6
... But you do realise a suborbital flight could go as far away from the earth as it likes, so long as it does not make a full orbit, but has a periapsis at least into space, i.e. to the height of low earth orbit?


The Shepard One spacecraft cannot reach the altitudes of low Earth orbit, even on a suborbital flight.

Low Earth Orbit (LEO) begins at roughly 100 miles (160 km) up. The Shepard One vehicle can only reach a altitude of 60 miles (100 km), which is below the altitude of what is considered to be LEO.

You are obviously as ignorant as wildespace. A sub orbit can be a single burn from the ground. It can go as high out as it likes, in fact it has to get at least as far as LEO, thousands of kilometers or more, however far is needed, so long as it does not go into an orbit.

If something is sent up but does not even go above an orbital height it is 'ballistic'.

can i recommend the childs game "Kerbal Space Program" for you or anyone else unsure, as this is explained extremely early on, before you have to go to other planets etc.

[edit] You'll notice that wildspace stops posting once hes been proven wrong. But I'm sure he'll be grateful for you posting instead. Hey Jim, hows the weight loss going?

Forget "Orbital" and "Sub-Orbital" for a moment. Again, the altitude at which is considered "in space" is 160 km (about 100 miles). The Shepard spacecraft cannot reach that altitude; it can reach approximately 100 km, which is not "in space".

Blue Origins themselves say that the New Shepard launch vehicle is not designed to reach the 160 km required to be called "space". It will be limited to about 100 km in altitude. Blue origin's next generation of launch vehicles -- named the New Glenn is being designed to be able to reach the 160 km needed to be consider "in space), and will actually be able to reach higher trajectories than that.

The New Glenn is currently in development and will hopefully have a test flight by 2020.


As for the terms "orbital" and "sub-orbital"...Yeah, it's true that it technically not associated with just altitude -- i.e., something could be in orbit if it were just one inch from the ground, if the ground were smooth enough, and the object was moving fast enough....

...However, the reason I called the New Shepard a "sub-orbital craft" and the New Glenn an "orbital craft" is because that is exactly what Blue Origins calls them; it's that simple.

That is to say (and this is the important part) The New Shepard launch vehicle cannot achieve orbit at the altitude of the apex of its trajectory because it does not have the angular velocity to do so.

The New Glenn (which is under development) should be able to reach a high enough altitude in order for its angular velocity to be enough to go into orbit.

The converse is also true. Something at 100 km (or even 100 cm, to be extreme) can potentially reach orbit if it were moving at a great enough angular velocity. The higher the atitude, the lower that angular velocity needs to be to reach orbit.

The "Newton's Cannonball" thought experiment can illustrate this: 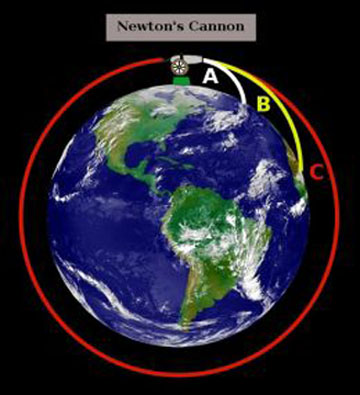 At a given altitude, the cannonball with the least angular velocity (cannonball A) is pulled down by gravity and impacts squarely onto the surface of the Earth.

Cannonball C has a great enough angular velocity that as gravity pulls the cannonball back down, the cannonball has gone far enough "out" that the Earth's surface curves back around under the trajectory enough that the cannonball's trajectory never intersect with the surface of the Earth -- and thus orbit is achieved. 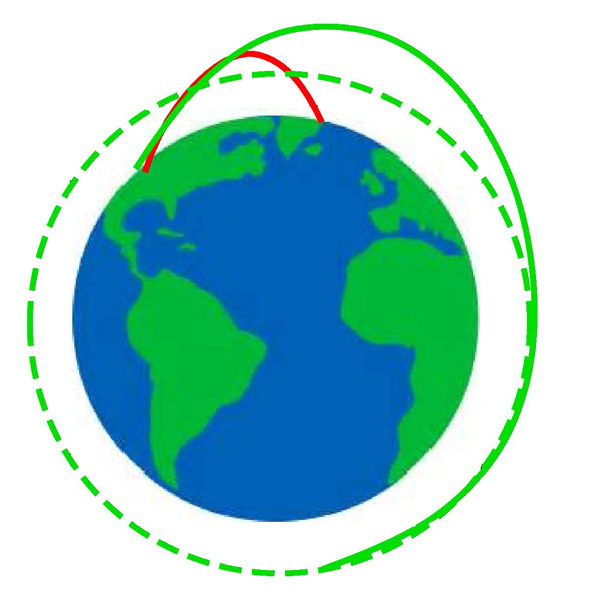 But all of these thought experiments aside, the bottom line reason for me saying that New Shepard is a sub-orbital craft because Blue Origin call sit a sub-orbital craft. I'm not sure how you can argue that the New Shepard is capable of achieving anything more than that (considering all aspects of what is needed to achieve orbit) when the people who make it say otherwise.

We need to keep up the hard work and prevent the ccp from overtaking the US. Thank god we already have infrastructure and know how plus experience.