Ireland's Most Haunted Castle-- Leap Castle and the Elemental

Now we are ready to begin.

Irish history is rife with bloody battles waged, whether it be against invading forces or within the powerful Irish clans. If there does indeed exist a condition wherein spirits remian trapped near places of great violence, surely Ireland houses a formidable spirit realm. Leap Castle is one of these such places and, as legend has it, the most haunted castle in Ireland. 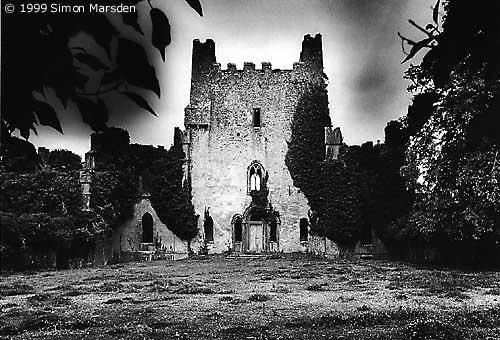 It is believed that Leap Castle was built around 1250 by the O'Bannon clan (upon a much more ancient sacred druid ruin), and soon became the principle seat of the belicose O'Carroll clan. It was the location of violence, murder, and death, destroyed on several occasions, attacked, lost, reacquisitioned, and the location of many turbulent and horrific events. No wonder the spirits can't find any rest there.
Even the castle's name has a bloody inception, rumored to have been called Leap of the Bannons in reference to a bloody game of chicken played by the O'Bannons to see who would be the righteous heir to the castle. Two brothers took a leap off a nearby rocky outcropping, and the survivor was the lucky recipient of the land. Makes sense, eh?

A brief rundown on some of the more fascinating historical events that took place in Leap Castle:
*Attacked in 1514 and 1516 by the Earl of Kildare (also a known practitioner of magick) who may or may not have placed the evil Elemental in the castle as a curse (more on this later)
*The scene of a Cain-like murder in what is now known as the bloody chapel-- at the death of the head of the O'Carroll clan, there was a bitter dispute for ascendency which ended in one brother murdering another (a priest) while he was administering mass to his family in the chapel. The brother-priest's ghost is one of the rumored spirit residents of Leap.
*Burnt to the ground in the late 1500s in an unsuccessful attempt to keep out the invading Elizabethan forces (they occupied the castle for a year or so)
*The scene of a horrific mass murder when 40 members of the McMahon clan were invited to Leap to train with the O'Carrolls for warfare against an enemy clan.. the training commenced in a feast in which the treacherous O'Carrolls poisoned their guests so as to avoid footing the bill (sounds insane to me as well, but that's what the source said! Will post sources at bottom.)
*Later acquired by the Darby clan through marriage, and the rumored location of vast treasures hidden by Jonathan Darby in the height of the English Civil War.
*An ancestor of the Darby's, Mildred Darby, reportedly awakened or invoked the evil Elemental spirit while dabbling with the occult inside the castle. Here is an excerpt from her testimony about the spirit:

"I was standing in the Gallery looking down at the main floor, when I felt somebody put a hand on my shoulder. The thing was about the size of a sheep. Thin guanting shadowy..., it's face was human, to be more accurate inhuman. Its lust in its eyes which seemed half decomposed in black cavities stared into mine. The horrible smell one hundred times intensified came up into my face, giving me a deadly nausea. It was the smell of a decomposing corpse."


I will include links, pictures, and a short video so you can gain more information about this fascinating and terrifying place. 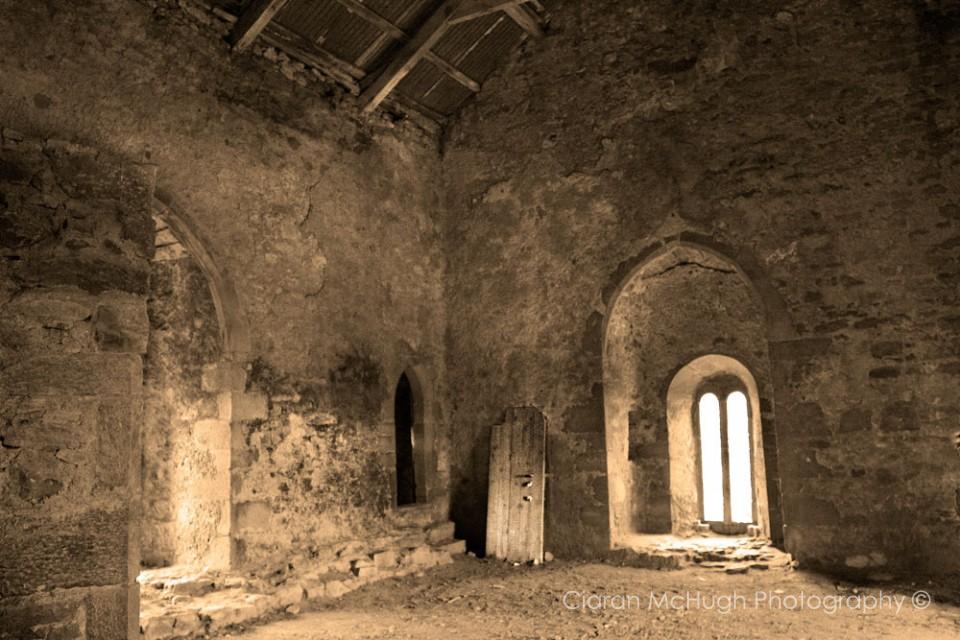 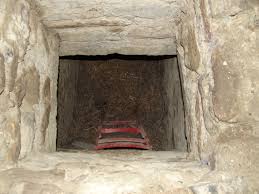 Oubliette where three cartloads of bodies were found- apparently, people were dumped in this hole on spikes and left to slowly die 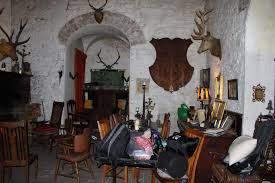 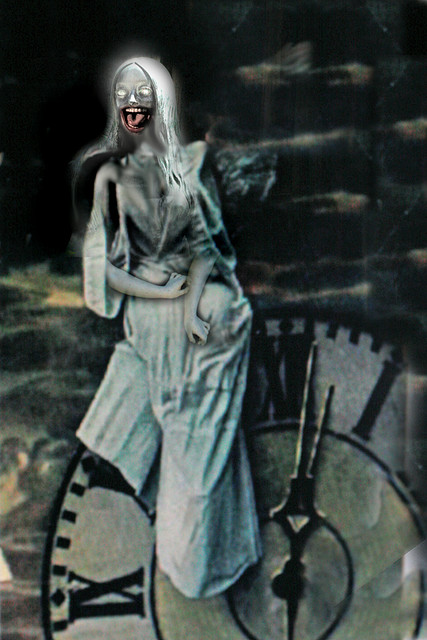 Rendition of an elemental spirit

Here is a link to an excellent site about the Elemental of Leap Castle- please take a look and read the additional info.
leapcastle.net...

And finally, I leave you with a short video detailing the castle's haunted history:

*The scene of a horrific mass murder when 40 members of the McMahon clan were invited to Leap to train with the O'Carrolls for warfare against an enemy clan.. the training commenced in a feast in which the treacherous O'Carrolls poisoned their guests so as to avoid footing the bill

This reminded me of "The Red Wedding" from Game of Thrones.

Very cool thread, thanks for posting

There was a book I've read called Forever which is basically how some Irish dude in the 1700s was cursed with immortality and upon losing his immortality in 2001 shortly after 9/11 was offered to go to the Irish afterlife. During the 1700s, he and some Irish were secret practitioners of the ancient Druid religion (It was illegal to practice because of Christian authorities at the time). When I read about this I was reminded of the book due to the Spirit realm and ancient Druid religion mentioned here.
edit on 3/29/2017 by starwarsisreal because: (no reason given)

Thank you for reading
Great reference to the Red Wedding scene (haven't watched but heard all about it). The two stories do seem to have a lot in common.

Awesome thread zosi, very cool idea with the background music, might have to take that idea and put it in my back pocket for a future thread, hope you don't mind I'm currently driving right so I'll come back later and take all this in.

Thanks for the info about the book! Sounds fascinating.

Hi knowledge! Please do use whatever you would like from my playbook and thanks for the compliment.

I got the urge to write a bit more on these such fascinating topics after reading some of your fun "grey area" threads, so the compliment is mutual.

Have a great day my friend!

Try making your little stars a different color so it creates an easy separation for the eyes when reading the different events. (our secret now, don't tell anyone, it's not too late!)

Ooh, secrets of the trade (wink wink) thanks, I won't tell anyone! wait...

Great thread! The music really set the mood for me. Have you ever been to Leap Castle and if so do you have any personal experiences to share?

Thank you! To me, it fit perfectly with the theme so glad someone else was there with me.

I don't have any personal anecdotes about the castle.. just an interest in the paranormal. A few years ago, my brother, sis in law, and I were watching a lot of ghosthunters (lol, those guys were so funny) and we went to a few local paranormal spots. We saw nothing.

My brother and sister in law, however, kept the spirit alive in other places-- they saw the Marfa Lights and visited a haunted castle in Ireland (will ask today if it was indeed the Leap Castle) and in both cases they saw lights (after dark) that they had no explanation for. Recently, when I asked my sister in law what was her strangest experience, she mentioned the castle.

They have more guts than I because you would never catch me at an old abandoned castle after dark.
Ah- Now that I said that, I realized the castle in question could not have been Leap because there are now human residents there.
So, no personal ghost experince for me.
Have you had any?

I'm saving this to read after I get all my housework and cooking done. I love Castles, love hauntings and historical places. Though I have heard of Leap Castle, your info seems far more in depth.

The following quote from your post made me perk up as my Paternal Grandmother's maiden name is McMahon.


The scene of a horrific mass murder when 40 members of the McMahon clan were invited to Leap to train with the O'Carrolls for warfare against an enemy clan...

Reminded me of the Red wedding in GOT too,
which was inspired by real events: the Black Dinner of 1440 and the Massacre of Glencoe from 1692.

Interesting. Thank you for even more morbid history to pique our interest!

originally posted by: zosimov
a reply to: Night Star

Just realized I saw this video before. I posted it one time in one of the sheds. This thread was presented so wonderfully and I enjoyed it very much. Didn't realize there was a McMahon connection though, so that was pretty wild. Thanks!
edit on 29-3-2017 by Night Star because: (no reason given)

Awesome, it is truly a great (bit dramatic but in that fun spooky way) video. I enjoyed it.

Thank you so much for reading through and commenting! So glad you enjoyed and learned that fascinating (but sad!) connection.
edit on 29-3-2017 by zosimov because: (no reason given)

I have loved paranormal stuff since I was a kid. I went on one investigation and had a blast. It was a dinner, presentation of the history of the building and then an actual investigation where we could use ghost hunting tools. It was a historical Inn/restaurant in another town. New England is just filled with ghostly tales and happenings.


Feel free to post more fascinating threads like this. Oh and...send me a private message in case I miss it. Sometimes I get busy and miss some good threads. Thanks Hun!

Me too, I have always been fascinated with the mysterious.
Thank you so much for the encouragement and I will be sure to message you to let you know next time I make one of these!

this thread comes complete with a soundtrack, so please press play on the following video before reading:

That was an Awesome way to present a thread!!! I think you very well may have changed ATS forever!!!
Bravo!