posted on Mar, 28 2017 @ 12:37 AM
link
This is more of a question then an answer thread at this point in time. I posted in another thread about this, but it probably wasn't the correct one. There are no green lights, just standard running lights. I'm leaning to this plane being the 21, but don't know. I've seen it now probably 4 times and my employee has spotted it the same amount. It looks like a giant triangle, but with a tail or at least something a bit behind the wings for a marker to flash. It's close though, not like a regular plane with an extended fuselage and tail section.

This plane is extremely quiet. That's what sets it apart. The first night I saw it, I thought it was just another c17 that flys over my house when it was approaching. Then it was overhead and I didn't hear anything. The outline from below was like a big triangle. Even as it passed me I didn't hear much more then a gust of wind from it.

It was flying around 2200 and then with the time change and the days getting longer here we've been spotting it between 2300 and 0100.

I've been too busy with work to put a strong effort into trying to get a picture. It's supposed to be failure warm this weekend and the plan is to do a couple nights out waiting for it with a camera.

If anyone has some ideas on what this plane might be that would be great. I've been obsessed with it sense saw it the first time. Just one of those moments that are eerily hard to forget.


Besides this the planes have been flying a lot here. Watched 6 raptors come in around noon.

A triangle with a tail?

I wonder how far along SPEED AGILE or the KC-Z programs actually are.

Undoubtedly, as with the typical "black triangle" sighting, you have seen too much and yet they allow such to happen. I've had my own similar sighting back in 1998. That is the price to pay when they have the advanced equipment and must use it and train with it but they want you to deny what you really saw and settle for something move conventional in structure and power plant. That continually happens here on ATS or haven't you noticed?

I have a couple of threads on these machines on ATS. Here is one: "Black Triangles: The Worst Kept Secret"

Can you give us a quick sketch of what you saw?


edit on 28-3-2017 by Aliensun because: Ttwo errors in one short sentence. It must be bad coffee!

Good luck snapping some pictures - if you can post a sketch or something that may help some of the resident experts point you in the right direction...

Had something similar last year, especially the "unique" sound which is what got my attention, it was night time and only could tell something not in publicly known inventory. Whatever it was it was bigger than fighter with low deep resonating whine. Something I had not heard before. I normally I'D most aircraft readily by sound for decades and know what I'm hearing before seeing.

Was told "not in your area" "must have been an Osprey" blah, blah, blah.

Funny since that time and post the "training" area I was informed I was under has remained unused when formerly it was used every other day. The change in use was immediately after posting.

Since then it's been FA-18's about 5 miles west but only once or twice a month.

Activety went from very often to nill overnight, found that curious with timing.

Be curious if activity goes to zilch your area now.

The flight activity has been very high here lately. For the size of the plane it is along the same as the c17, maybe a bit smaller. It's hard to say what it is because it's always at night. It's the sound that is what makes it unique.

That sounds exactly like what I'd imagine an IR-suppressed high bypass turbofan would sound like. All that ducting is sure to be noisy.

All I got was second or less of glimpse of dark silloette against dark sky going north away from my location, mostly the very distinctive sound that could be described as deep bass whine but very absent higher pitches normally heard.

Been A/C buff since mid sixties, never heard that sound before or since. 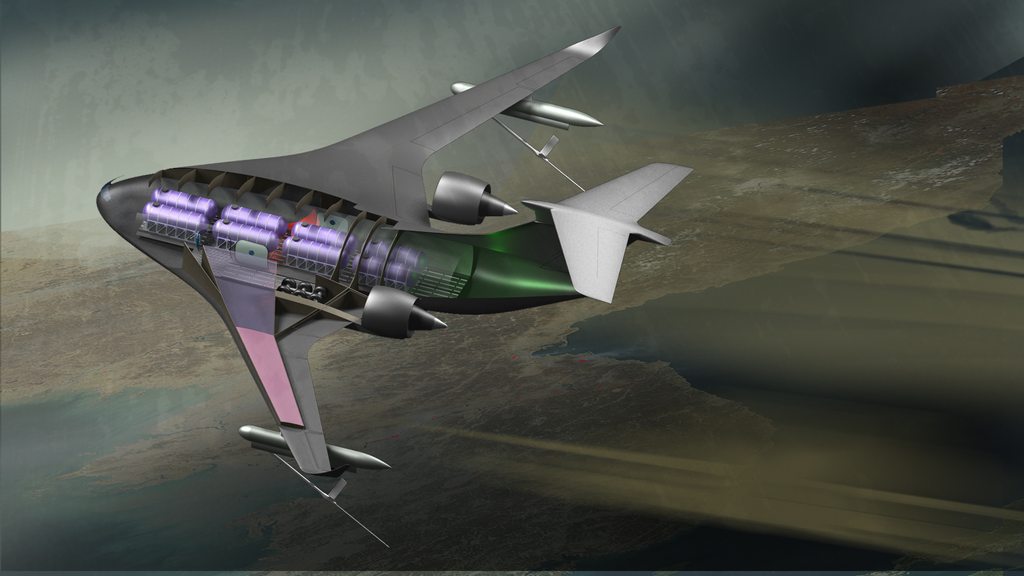 If it's the Lockheed hybrid BWB concept, which would make sense as that's a strong contender design for KC-Z as well as a possible C-5 replacement, then those trailing edge turbofans could also produce that "like nothing else" sound because of the interaction between the laminarized post-wing airflow and the high-bypass turbofans. Anybody who has ever heard a Piaggio Avanti or was lucky enough to ever see a Beechcraft Starship flying will know exactly what I mean in terms of what post-wing airflow does to an airplane's sound.

Also, after Lockheed's great experience with rapid composite fabrication building the​ X-55, their Hybrid design definitely seems like something they could whip up relatively easily at Palmdale.

Quite a bit, but I couldn't see well enough to see if it's a time tail or v tail. I only saw it decent one time and the other sightings have been more of a glance. It was two days ago I had two c17s fly over then about 10 minutes later saw more lights coming and then the quiet plane about a few minutes later two raptors. The first time I saw it, it was very low and thats when I made out the outline. I'm hoping for some clear warm weather this weekend to stake it out. I don't have the best cameras though.

What is that plane? The proportions look correct for what I saw for wing width and distance the tail was behind the wing tips.

It's the Lockheed Hybrid Blended Wing-Body concept that the skunk works has been working on. 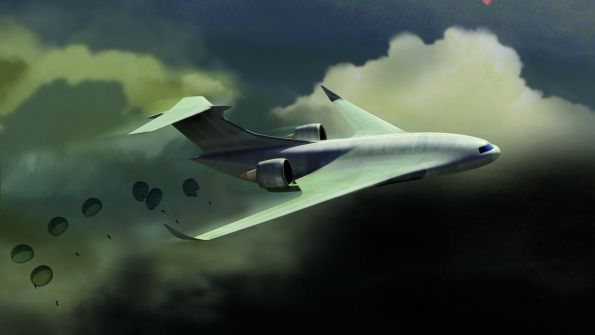 That sure seems close from what I can see. I've only seen it from below so the picture you have makes the tail seem bigger. What do those engines sound like? What I hear is pretty quiet, but sounds like a big gust of wind and not the normal house shaking thunder of a c17 or other jet.

I'll try to draw a sketch when I'm home. I'd really like to get some pictures.

Probably high-bypass fans. Have you ever heard an A350 or a 787? This would probably use similar engines.