The essay has not been released to the public yet...
And yes it is about aliens...
Did you even try clicking on any of the links?
edit on 16-2-2017 by 5StarOracle because: Word

posted on Feb, 16 2017 @ 09:39 AM
link
I find it a bittersweet reminder that we used to have great statesmen that were intelligent enough to pen an essay on a scientific topic, in their spare time.

Today, many of our leaders (in America) are so "anti-science" it is embarrassing.

originally posted by: 5StarOracle
a reply to: gortex

A wartime world leader in an era filled with UFO reports that had only common knowledge on the matter?

Churchill and Eisnhower are accused of colusion to cover up UFO's...

Pretty much every US president has been accused of covering up UFOs.

The Daily Mail is even less reliable than secureteam.

posted on Feb, 16 2017 @ 04:26 PM
link
This story is interesting in a historical sense but I don't think Sir Winston Churchill knew anything about 'aliens' that was top secret knowledge. Despite the paranoia and talk of government cover-ups during the post-war years.

Although there are some interesting little tidbits of UFO folklore surrounding Churchil.

There was supposedly an alleged 'flying saucer crash' close to his home in Westerham in 1946.

Winston was also to have said to have been behind a cover-up of the UFO phenomenon during WWII.


Winston Churchill was accused of ordering a cover-up of a Second World War encounter between a UFO and a RAF bomber because he feared public panic and loss of faith in religion, newly released secret files disclose.

The former Prime Minister allegedly banned reporting of the bizarre incident, off the east coast of England, for half a century amid fears disclosures about unidentified flying objects would create public hysteria.

He is said to have made the orders during a secret war meeting with US General Dwight Eisenhower, the then commander of the Allied Forces, at an undisclosed location in America during the latter part of the conflict.

A slightly more reputable source than the Daily Mail (slightly!)

The story came from a number of letters on file from a person claiming to be the grandson of one of Churchill’s bodyguards. In the letters it was claimed that a RAF reconnaissance crew had been intercepted by a metallic craft close to the East Coast of England. The object was silent and whilst the crew had been tracking the aircraft, it then sped off at great speed and vanished without a trace.

One of the claims in this correspondence says:

This event was discussed by Mr. Churchill and General Eisenhower, neither of whom knew what had been observed. There was a general inability for either side to match a plausible account to these observations... another person raised the possibility of an unidentified flying object, at which point Mr. Churchill declared the incident should be immediately classified for at least 50 years and its status reviewed by a future prime minister.

A search through the National Archives shows nothing to substantiate that any such cover-up was instigated by Churchill. However attempts were made to conceal information from the public, politicians and even the Prime Minister himself.

Churchill wrote to the British Air Ministry in 1952 about Flying Saucers asking :

"What does all this stuff about flying saucers amount to? What can it mean? What is the truth? What does this all mean?"

This was not long after the UFO flap over Washington. However, the "Flying Saucer Working Party" had already made study, unbeknown to Churchill, about 9 months earlier, and a rapid response was provided to Churchill. 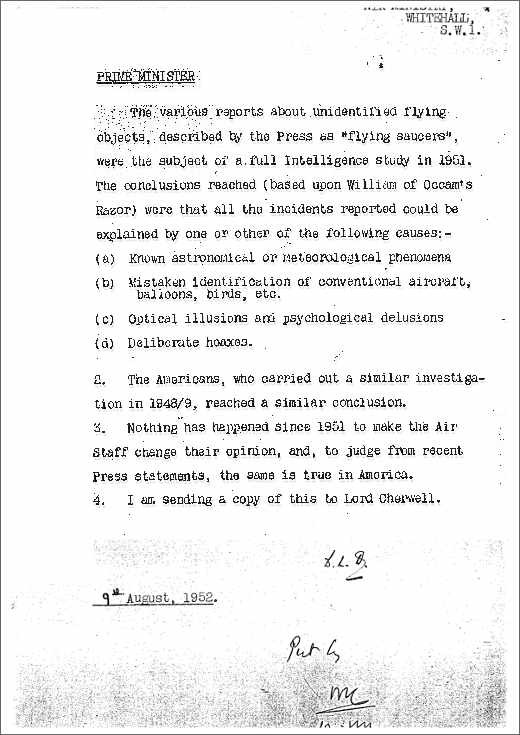 The study referred to was the work of the Directorate of Scientific Intelligence & Joint Intelligence Committee - DSI/JTIC Report No. 7 (National Archive reference DEFE 44/119). Numerous cases were explained as aerial objects, illusions, hoaxes or psychologically disturbed witnesses. The fatal Thomas Mantell case in the USA was blamed on the pilot chasing Venus.

The Working Party also liaised with the CIA to debunk sightings and make sure more puzzling cases did not reach the media. Sceptics have seen this as no more than a move to avoid a confrontation with the Soviet Bloc during a very paranoid phase of the Cold War. But maybe there was more to it?

We have been informed, in conversation with a member of the United States investigating team, that the even more sensational report of the discovery of a crashed flying saucer, full of the remains of very small beings, was ultimately admitted by its author to have been a complete fabrication.

It seems like a link to Roswell. But the report almost certainly points to the frequently discredited Frank Scully story of a crashed flying saucer in Aztec, New Mexico in 1948. Neither was directly referenced in the report which concluded:

….we recommend very strongly that no further investigation of reported mystery aerial phenomena be undertaken, unless and until some material evidence becomes available.

There were two factions within Churchill's group of advisors, those who believed flying saucers presented a very real problem and those who thought it was misguided paranoia. (This was very much echoed across the Atlantic at the time).

Did he know something we don't?

Personally I don't think so. But he was certainly aware of the UFO issue.

posted on Feb, 16 2017 @ 07:31 PM
link
I thought this was about an actual essay that Churchill wrote about aliens being discovered. Change your damn title, this is CLICKBAIT CRAP.......

I don't need any orders or crap from you...
Just what is said in Winston's essay is yet to be known...
Your summary is what's really crap...
Lacking any real substance aside from your mistaken assumtion based on the title of the video I shared...
Change your attitude and thought process and get some manners...
It is an actual lost essay on aliens written by Winston Churchill which has been discovered... The contents of which have yet to have been fully disclosed...