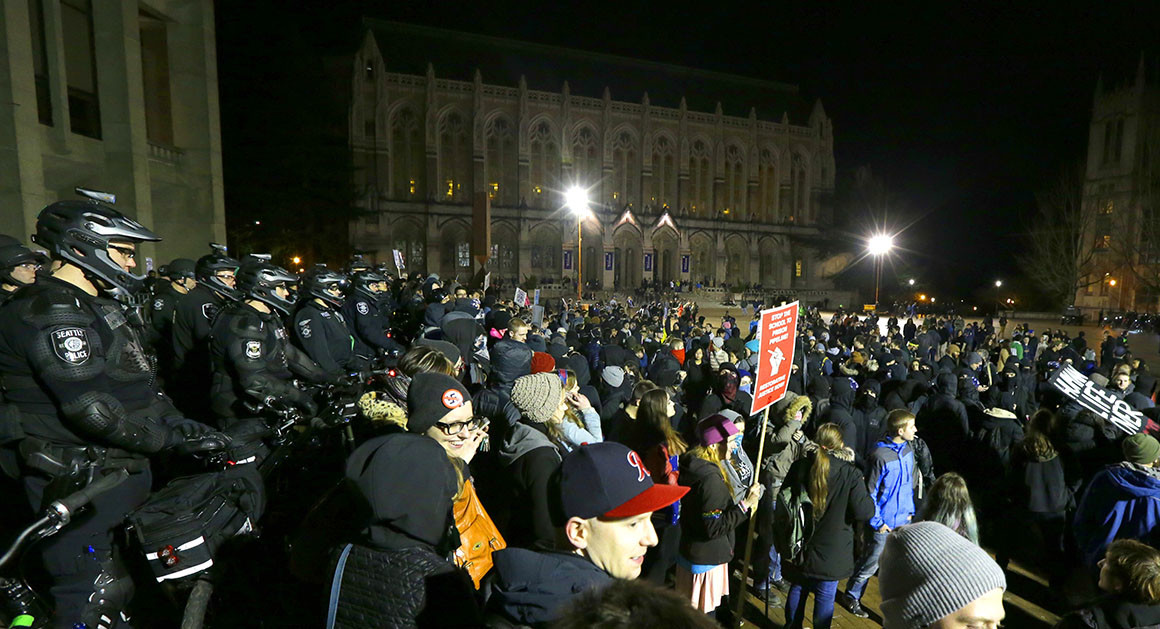 Milo tweeted before the event.


Protesters outside my University of Washington event tonight have baseball bats and the sticks their signs are fixed to have been sharpened to points, according to local police.


To see a phalanx of police at a political lecture certainly says something about the speaker.


One man was shot and wounded, several people were hit with paint and officers avoided flying bricks outside the University of Washington’s Kane Hall on Friday night, where Breitbart News editor and provocateur Milo Yiannopoulos addressed a crowd on President Trump’s Inauguration Day.

Source
The Breitbart article goes into much more detail.
But not willing to risk the firestorm linking it here.


Yiannopoulos, who came at the invitation of the university’s student College Republicans club, briefly left the stage to confirm the shooting. Minutes later, he returned, saying, “If we don’t continue, they have won.” The crowd cheered.


From what I can gather the police had to usher attendees out through an underground entrance as not to provoke anymore violence.


The only real comment I have in regards to this is more of a question...
Is anyone on the left at all going to take a stand against this?
People are being assaulted daily and now shot trying to exercise their rights of free speech and assembly.
I thought liberalism came about to prevent these things not perpetrate them.
edit on 21-1-2017 by JAY1980 because: (no reason given)

Protest violence, by getting your violence on...nonsensical.

Democrat leadership didn't attempt to dissuade or condemn violence by their trainees and surrogates all over the country in November. Why would they want to do so now?

After all, it's not like any of them NEED Donald Trump or the U.S. Congress for anything, going forward. Right?

We are well on our way to real life Idiocracy mixed with 1986 it's bizarre...Maybe these are actually the biblical end times and as far fetched as it all is religion is legit and true lol.

posted on Jan, 21 2017 @ 06:37 PM
link
Seems like these riots (anyone who calls them protests is frankly lying) are really starting to get out of hand. Some pretty drastic measures will need to be taken to restore order if these destructive hate-inspired riots continue to escalate.
edit on -060006pm1kpm by Ohanka because: (no reason given)

posted on Jan, 21 2017 @ 06:41 PM
link
Maybe Trump should label these "protests" riots. They should do this BEFORE someone gets out of control.

Well with today's loose definition system we could technically skip to terrorisim...I mean it fits exactly with the definition of that tactic.

posted on Jan, 21 2017 @ 06:45 PM
link
I followed this as it developed last night but didn't share due to lack of info. To update, the man shot is in stable condition now. The shooter was let go after turning himself in. Initially there were news claims of self defense between them and as to why he turned himself in(another source from today), authorities are pending investigation.


Seattle Police report the victim had a suspected gunshot wound to the abdomen. The 34-year-old male UW shooting victim is in critical but stable condition at Harborview Medical Center/UW Medicine on Saturday morning. According to University of Washington Police, the shooting suspect and another individual turned themselves into police early Saturday morning. Both were taken into custody.

"Following investigation of the details surrounding the incident, and in consultation with the prosecuting attorney's office, the suspects were released pending further investigation. No suspects remain outstanding," university police said in a statement.

originally posted by: seagull
...and they simply don't see the contradiction.

Protest violence, by getting your violence on...nonsensical.

Hey everybody knows that a cameraguy and Starbucks are personally responsible for the Trump presidency, and that's why they're being targeted. Duh

No, the Feds do not need to get involved if it can be avoided. This should be a local matter, for the cops to handle. Since this happens only, seemingly, on large college campuses (and UW is frickin' monstrous...), college LEO's and administration can have an effect, too.

Protesters who are students caught involved in incidents can be, upon review, asked to leave the school permanently.

Other methods will, of course, occur to us with a little thought.

Donald Trump has more important issues to deal with. Riot/Protest control isn't one of them, especially on this small a scale.

Wouldn't that be interesting, if it turned out to be intolerance of intolerance at a protest about intolerance? Getting in to Inception territory now...

originally posted by: RickyD
a reply to: Tempter

Well with today's loose definition system we could technically skip to terrorisim...I mean it fits exactly with the definition of that tactic.

yep, maybe the democrat party should designated as a terrorist organization and outlawed?

originally posted by: Tardacus
yep, maybe the democrat party should designated as a terrorist organization and outlawed?

You may well be on to something here

posted on Jan, 21 2017 @ 08:17 PM
link
Protests at his events have been steadily escalating over the past few months, his event at UC Davis dubbed "Twitter Villain Extravaganza" with Martin Shkreli was cancelled after protestors started jumping barricades with hammers and now people are being shot.

The tolerant left at it's finest.


Ironically, guess who is the one leading a peaceful protest.

originally posted by: Tempter
Maybe Trump should label these "protests" riots. They should do this BEFORE someone gets out of control.


Then what, make even all peaceful protests into riot status so they are effectively/attempted to be shut down? Make them illegal? Or bringing in the national Guard and or have another Kent State? No, freedom of speech, well, unless you choose to hold an event in a private area of a college or otherwise?

To be fair Milo picked, and had a large audience, at a very know(most here taut about Liberal Seattle dropping off into the ocean with California)"liberal city" University to hold an event at. Did he expect no altercations(there were others) from a planned protest against him as well as already heated up people?

I didn't know about the Milo thing when he mentioned it.

Here is his take on all these protesters and protests.

I agree with him.

I hope I am never in a position where I have to rely on the leftists to protect my freedoms of speech.

posted on Jan, 22 2017 @ 02:25 AM
link
i love the way you've all conveniently left out the fact that it's a protestor who got shot
but lol no it's the msm that's lying and distorting facts
you guys are all, like, beacons of truth and rationality or whatever