'It's like being dumped by a lover and also being stuck in a nightmare,' said the singer

'We were doing everything: lighting candles, meditating, praying, offering our lives to God forever, if only,' said Madonna

'I have to get way more vocal and become a little bit less mysterious,' she said about her plans once Trump is in office

I know we'll probably get the "I don't care about star's opinions" comments in this thread, but this story goes further than just opinions. It sounds like Madonna has had her life rattled because Trump won. This is a total psychological meltdown, and it goes far beyond someone expressing their opinions.

This issue relates to a thread I started recently.

Do you hold artist's political views against them?

In the original post of that thread I specifically mentioned Madonna. I'm sticking by my assertion that her political views don't change how I see her, but the story above creates different problems. I now see Madonna as being downright crazy and sick.

It's possible that she's demented because that's not the Madonna I remember from my youth.
edit on 11-1-2017 by Profusion because: (no reason given)

Were I God, I wouldn't have taken the deal either.

posted on Jan, 11 2017 @ 06:55 PM
link
She's part of the illuminati isn't she? Isn't she one of their many vehicles in which they are able to share their symbolism with us and try to entice us into accepting a New World Order?

She also offered BJ's for guys to vote for Hillary.

So does this mean God is on trumps side?
Or that she has no clue how praying works?

posted on Jan, 11 2017 @ 07:01 PM
link
I'm not sure that Madonna is sick or crazy, that is for a doctor to diagnose.
She seems a bit overly invested in Trumps win, both emotionally and spiritually and should focus on loving God no matter what (IMHO) plus she might have other issues that she is not dealing with on a personal level in her life that really don't have anything to do with the election. The election for her might be just an outlet to deal with depression without really looking within herself.
I wish her well on the journey to loving God.

originally posted by: Cobaltic1978
She's part of the illuminati isn't she? Isn't she one of their many vehicles in which they are able to share their symbolism with us and try to entice us into accepting a New World Order?

I don't see the relevance of that post to this thread. Have I seen things in her work that made me wonder? I definitely have. I haven't seen enough to keep me from being a fan of hers (at least not yet).

originally posted by: Profusion
Many people blame Madonna for being part of the decline of Western civilization. What's your opinion on that?

I feel like a bit of an expert on this subject since I grew up with Madonna. Her album True Blue was one of the first albums I ever owned. So, I may be biased. I see Madonna as having had an entirely positive impact on my life. I believe some of Madonna's songs are among the most inspirational songs I've heard. The following list includes just some of her inspirational singles:

I can't think of any pop stars who have had more positive hit songs than Madonna. I see her impact on society as being positive.

Are you talking about the Madonna of the pictures below? 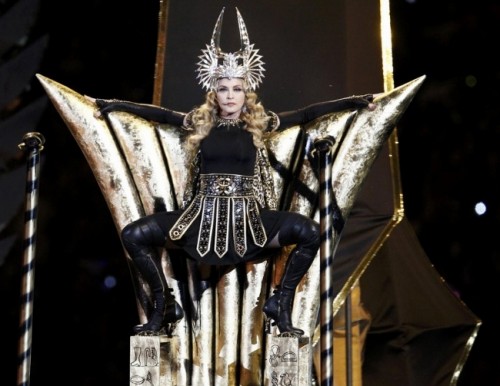 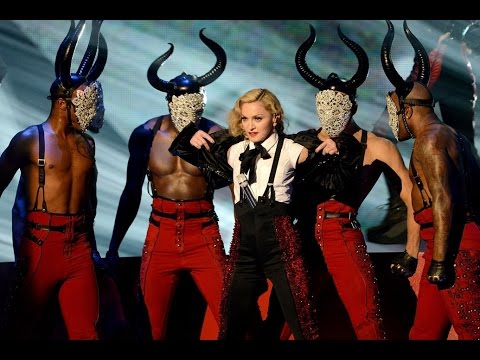 Has she paid up on her offers of oral sex for those men who voted for Hillary yet?


Entertainers? ENTERTAIN!!!!!!! Those of us who couldn't dream of living the life you idiots live, don't want to hear your political beliefs!

posted on Jan, 11 2017 @ 07:06 PM
link
she`s a mess you could expect this from a generation snowflaker but she`s an old woman she`s just acting like a fool.
using the Zohar and the quran? obviously trump`s god is more powerful than madonna`s god.
edit on 11-1-2017 by Tardacus because: (no reason given)

wasnt she one of those stars who sworn to leave the U.S. if trump got elected? why is she still here and not in a pseudo-Buddhist retreat in central london at a 5 star safe resort

I think I understand where you are heading and I'm inclined to agree with you.

Some celebrities are a bit "off" to begin with which may play a part in their creativity (or may not... I have no idea).

That being said, this past election cycle had a huge affect on some people.

I live in a very blue state so needless to say the majority of my friends/family/acquaintances are democrats. Most of them "got over" the election relatively quickly. That is not to say that they don't have concerns about what might be coming from a Trump Whitehouse but rather they are able to take it in stride.

I've mentioned in other threads that I have a brother that has refused to step foot in my house and "boycotted" Thanksgiving, Christmas Eve, Christmas Day, New Years Eve and our Mother's birthday. To that end, I would just add that during the primaries and throughout the general, I wasn't taking jabs at him about the election. Quite frankly, my family gatherings almost never even get into politics. It's mostly eating, having a few drinks, telling various funny stories that have happened since the last gathering, talking about our jobs and reminiscing about days gone by.

The other strongest example I can think of is an inspector from an outside agency that visits my project once a week. In the two years since the project started, she was (basically) always in a good mood. Very pleasant. She wasn't shy about disliking Trump and thought that despite some issues, Hillary was going to be a fantastic president. She visited my site two days (if I remember correctly) after the election and she was noticeably upset about it. By her own words she said that the previous few days seemed surreal. She has not been the same ever since. She is now quiet and completely humorless.

I'm no psychologist or social scientist but my takeaway from what I've been seeing is that there was a small segment of the population out there that was pretty much on the edge of having a nervous breakdown for various reasons and the election was the straw that broke the proverbial camel's back.

So many celebrities showing just how simple and moronic they really are with all this crying. Not that I didn't know they were already in la-la land.

originally posted by: seeker1963
a reply to: Profusion

Has she paid up on her offers of oral sex for those men who voted for Hillary yet?


I called her to say I had voted for Hillary three times.

This whole thing is really no great mystery.

I too was shocked to watch trump win.
And I personally feel that we just rolled back our collective American cultural landscape to 1950. And that is frightening.

I think the entire world is holding their breath with this one.

We have come so far and have grown so much since the 1950's that the only way to "get back there" is through absolute facsisim.

posted on Jan, 11 2017 @ 07:31 PM
link
There is a lot of this new age "power of intention" stuff going around. I think the trouble comes when individuals imagine they have more power than they actually do.

I don't think I've ever seen such sore losers in my life. God is not an ATM, and you don't always get what you demand. I honestly think God had nothing to do with this nonsense. It's a frigging ELECTION, from one country on a small blue marble in the vast expanse of the universe. Like any contest, there is a winner and a loser. This is all our doing, God was busy with stuff that MATTERS. Trust me, we are a flash in the pan, having existed as a country for a few hundred years, and God has more important things to do. Just like Madonna, I would go as far as saying we have become the Whore of Babylon and his face was looking away while all this idiocy was taking place.

My Lordy, these celebrities are so out-of-touch it's actually pretty funny. So is their sense of importance and entitlement. I'm surprised she didn't sacrifice a goat or a virgin on a stone altar to give Hillary the win.

Now she can tell God is republican.

posted on Jan, 11 2017 @ 07:34 PM
link
Well it all makes sense now, with all the church pedo stuff god figured he couldnt handle anymore bad PR and swung things in favour of Trump.

I wonder if she would have kept her other promise while being a nun?
Anyone else disgusted yet slightly aroused at the thought

posted on Jan, 11 2017 @ 07:34 PM
link
How about she devote her life to staying the hell out of our lives. Seriously, this pathetic excuse for a human being who spends her time thinking it's still the 80's and she is still relevant needs to disappear. From the sounds of it, she needs a straight jacket and a permanent vacation in the crazy house.