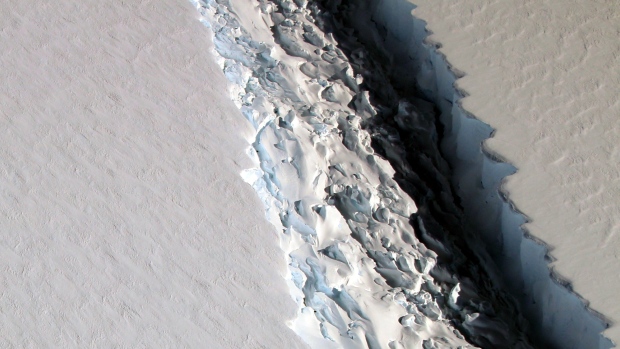 A vast iceberg, expected to be one of the biggest ever recorded, with an area almost the size of Prince Edward Island, is poised to break off Antarctica.

A rift, slowly developing across the Larsen C ice shelf on the Antarctic Peninsula in recent years, expanded abruptly last month, growing by about 18 kilometres. It is now more than 80 kilometres long with just 20 kilometres left before it snaps, scientists said. 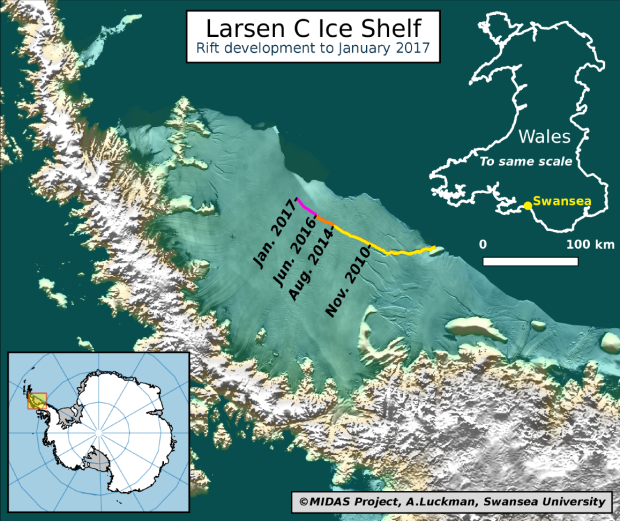 A closer look at the breaking in larger scale... 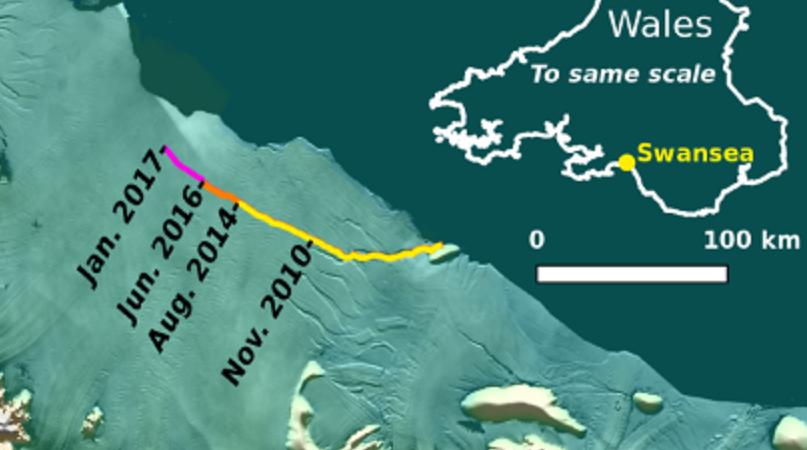 The iceberg "will fundamentally change the landscape of the Antarctic Peninsula" and could herald a wider break-up of the Larsen C ice shelf, the statement said.

Now if this isn't saying anything more that there could be climate change doing this or the pole shift could be the culprit. Either way if this does break off what sort of effects will it have on the Earth climate or imbalances in ocean temperatures or salinity. 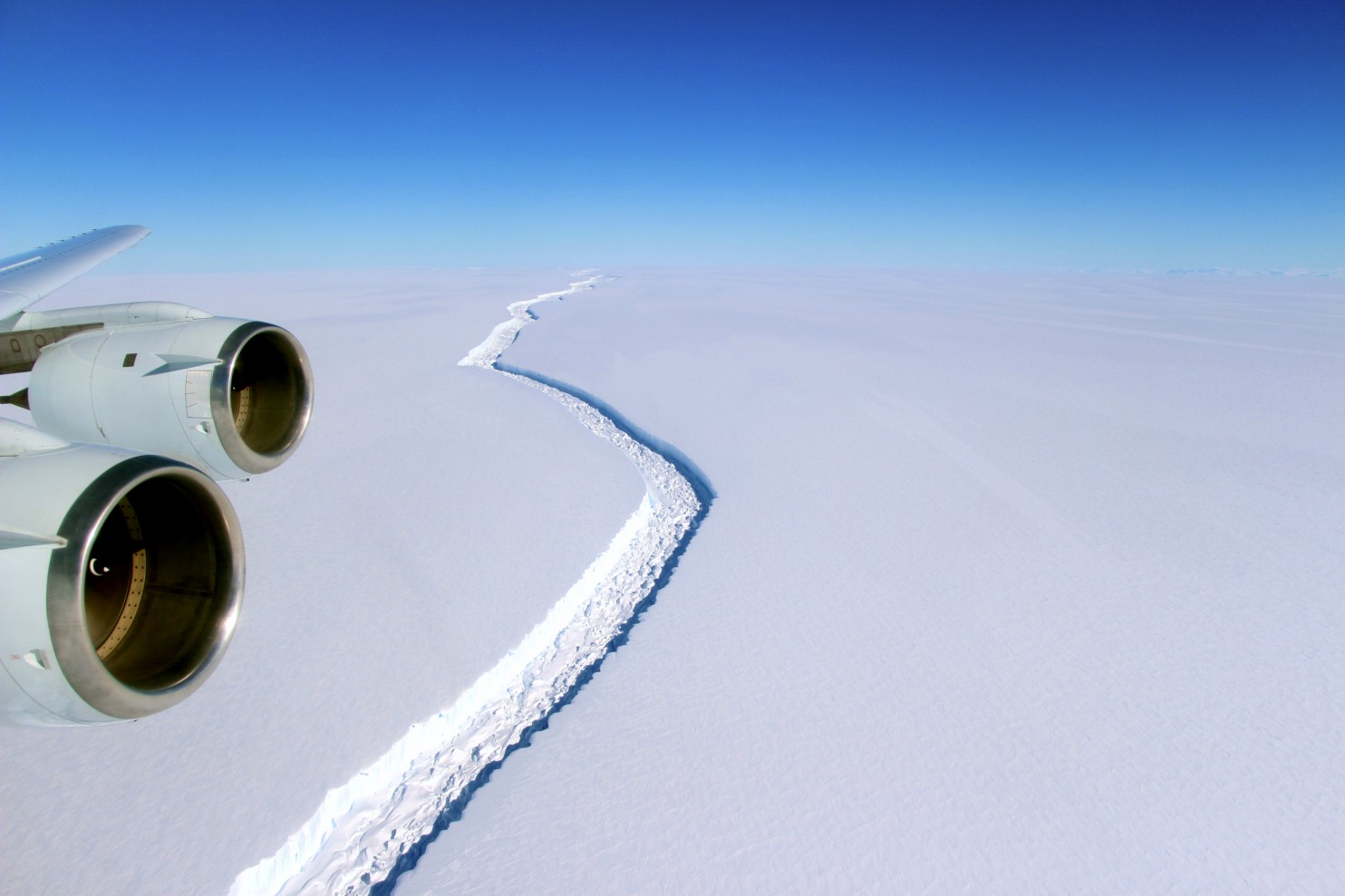 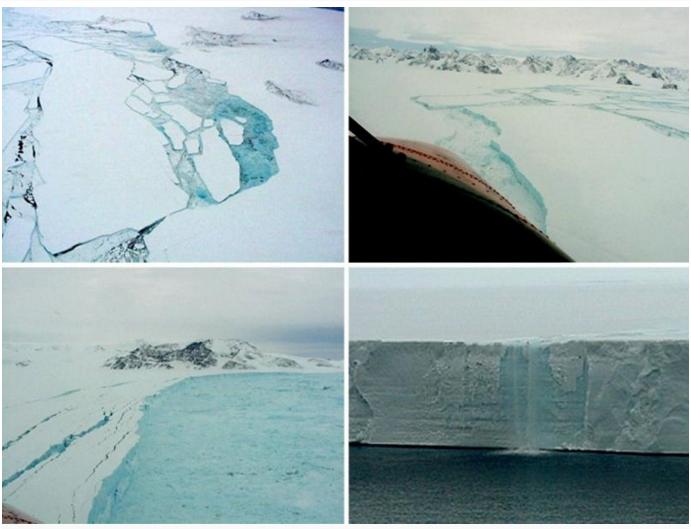 COMBO PHOTO- Aerial photographs taken in February and March 2002 of parts of the Larsen B shelf in the Antarctic show different aspects of the final stages of the collapse that has reignited fears of global warming and its catastrophic effects. The pictures show (clockwise from top left) the shelf breaking up near Foca Nunatak, a rift in the ice sheet near Cape Desengano, a cascade of water from melting ice nearly 30 meters high along the front of the shelf, and the new front edge of the shelf breaking up near Cape Foyn. About 500 billion tons of ice of the Larsen B shelf have disintegrated over the last month, the result of 50 years of sharp temperature rises on the Antarctic Peninsula unmatched elsewhere on the ice continent and in the rest of the world. 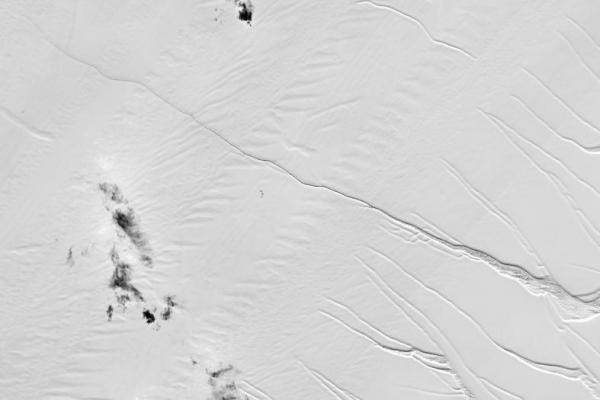 The dark line creeping across the Larsen C ice sheet suggest a large iceberg is preparing to calve.
www.upi.com...

How cool would it be to pull a boat up to a massive iceberg like this and hop aboard for studying. I wonder if there's anything frozen within the immense thickness of the ice? You know... shell casings from Operation Highjump... maybe some downed Vrillian aircraft...?

The landlocked side that will break away will expose a portion of the ice that hasn't seen daylight for.... how long?

Best idea for a reality show ever...live on the iceberg until it's gone. 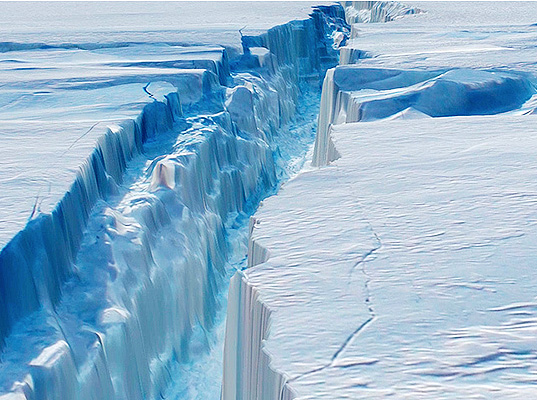 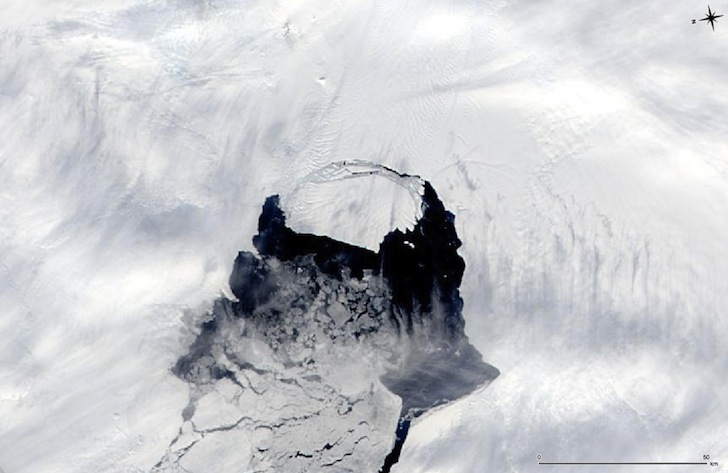 
Earlier this week a 70,000-hectare iceberg broke free of Antarctica’s Pine Island Glacier and floated adrift in the Southern Ocean.

NASA scientists foretold the iceberg’s formation in 2011 when they noticed an 18-mile crack spreading across the surface of the Pine Island Glacier (PIG). It wasn’t until July of this year, however, that the crack made it all the way across the New York City-sized iceberg. Due to freezing winter temperatures in Antarctica, however, the iceberg never left the region until just a few days ago.

posted on Jan, 6 2017 @ 10:41 PM
link
Imagine taking a boat under that waterfall, how refrishing that water would be.

posted on Jan, 6 2017 @ 11:09 PM
link
Lets all just start making beer out of it..
We need to get a fleet of ships and just go start hauling the ice to brewing companies all over the world.

Maybe just maybe, if we all pull together we can drink it before it disrupts the salinity of the ocean .
edit on 6-1-2017 by nemonimity because: Phrasing

originally posted by: UnderKingsPeak
What a quitter piece of Ice..
Go on ! get on out of here loser, go melt
with your friends.

if only it had listened and stayed away from crack.

posted on Jan, 6 2017 @ 11:56 PM
link
They took some nice pictures of that thing. That would make ice cubes to supply our country for five years. Hook up a tugboat or ten and start hauling it to California, I think those people need more mixed drinks. It will keep them off the wine which makes them believe in things that are not true.

They are beautiful pictures. I wonder what kind of impact it will have? A killer wave?

Will there be any type of prehistoric disease that is trapped in the ice that will be released?

I will almost guarantee you that if there isn't some 10,000 yr old disease under the ice, they'll say there is then use their own gmo concoction just to pare down the Population.
edit on 7-1-2017 by LuXTeN because: (no reason given)

originally posted by: Skywatcher2011
Now if this isn't saying anything more that there could be climate change doing this or the pole shift could be the culprit. Either way if this does break off what sort of effects will it have on the Earth climate or imbalances in ocean temperatures or salinity.

Nothing in either event--at least nothing that will affect any change that will cause problems for sea life. Remember, I'm willing to bet that more volume of ice forms and melts in the arctic every year than is contained in this chunk of ice, and it does nothing of note to the salinity or temperature of the water.

But I mean, looking at it climatologically, ice shelves are large outcroppings of ice floating on a "breathing" ocean that is never the same depth for long on a world where the temperature is constantly fluctuating up and down in cycles that span from seasonal changes to cycles spanning hundreds of thousands of years.

This is expected to happen, and will continue to happen, and then some will expand at another point in time, and then break off and contract at others. The photos are cool, the even is interesting, but really, looking for this to be evidence of the AGW theory or of an upcoming poll shift (we would have known if it was caused by an earthquake). And keep in mind, this is basically tantamount to throwing a snowball into an Olympic swimming pool. Everything will be just fine.

NO bid - just steal from the global public - business as usual!!!

There is another thread on ATS atm, regarding the Admiral Byrd expeditions.

In the various links etc, there is a reference to one of his expeditions in the 30s or 40s or whatever...might have been the one where the Americans set off a nuclear blast under the ice (the Nazis base) or something.

Anyway, there was a reference to a HUGE ice shelf that was or had broken off the "Ross" area, near Little America.
Probably/possibly an ice break as big as this current one........in the 1930s/40s.

Was this caused by "Global Warming"? Or is this just another example of what has been happening forever, that nowdays, because we have cameras and satellites and sensors etc etc, that we never had in the 20th century, ....we are noticing these events more.....that they are brought to public attention, that they would Never have had in the "Old Days".

I tend to go with the last........these events have ALWAYS occurred in that region, well at least since the Earth has had Ice covered poles......This is no cause for stress or alarm or more taxes!!!

I too, wonder at times, if these icebergs have been man-made through explosions...either to uncover what lies beneath the ice sheet or as to promote climate change [conspiracy]