I found cryptic notes written to me by me that I don't remember writing, Please help.

Today I found some interesting notes that were most likely written by myself to myself, but I can't be sure because there are words in there that I don't use and it's super weird and the word order is weird too. I found them in my notepad app on the iPhone (which I only remember opening less than five times). I'd love for people to take a look at it to see if there is something there. I really don't think there is, but this is one of the weirdest things that has ever happened to me.

Some things to know that may or may not be relevant.

1.  About two weeks before the date on the notes, I had been looking into some third eye and chakra stuff. I even tried some of the methods to "open my third eye" and did a lot of meditation.  I did this because my spirit feels empty and I'm trying to fix it. I don't normally go for the eastern stuff (just not raised that way I guess).

2. I think I took an Ambien that night for my insomnia (but no drugs or alcohol). I don't take the Ambien often (5-10) times a month to give you and idea. But I've never had any weird side effects that others report. Never hallucinated for example. I do have two boys (after you read the notes you'll understand what I mean. .

3. I clearly remembering sitting down on the floor next to my bed and started to try to "open my third eye" and meditating. I know it probably sounds crazy but I've been in a bad spot for over a year and I'm trying various stuff. Plus I like to keep an open mind. Anyway the next memory I have was a woman sitting in front of me, cross legged like me, and I remember her talking to with me I for some reason her hands seem specially important to me. Like I can't get it out of my head.  I can't remember anything else about that encounter except flashes and images that I can't make sense of. Just like when I'm trying to remember a dream. So the next morning, I remembered what I just related in this post, but I chalked it up to a vivid weird dream.

4. No one else uses my phone, I have it protected by thumb print. So it wasn't my kids or wife that did it.

5. I have no recollection of writing the notes. I've read them several times to see if it would trigger a memory or something but nothing.

6. I opened my note pad to paste something that I needed to put somewhere else (never had to do this on a phone).
When I opened the app, I noticed the two entries. I don't exactly know which one was first but I'm giving it my best guess according to how the notepad saves notes.

Ok I hope I can get these images to work. If they don't show up, keep trying so you can look at it when they are up. 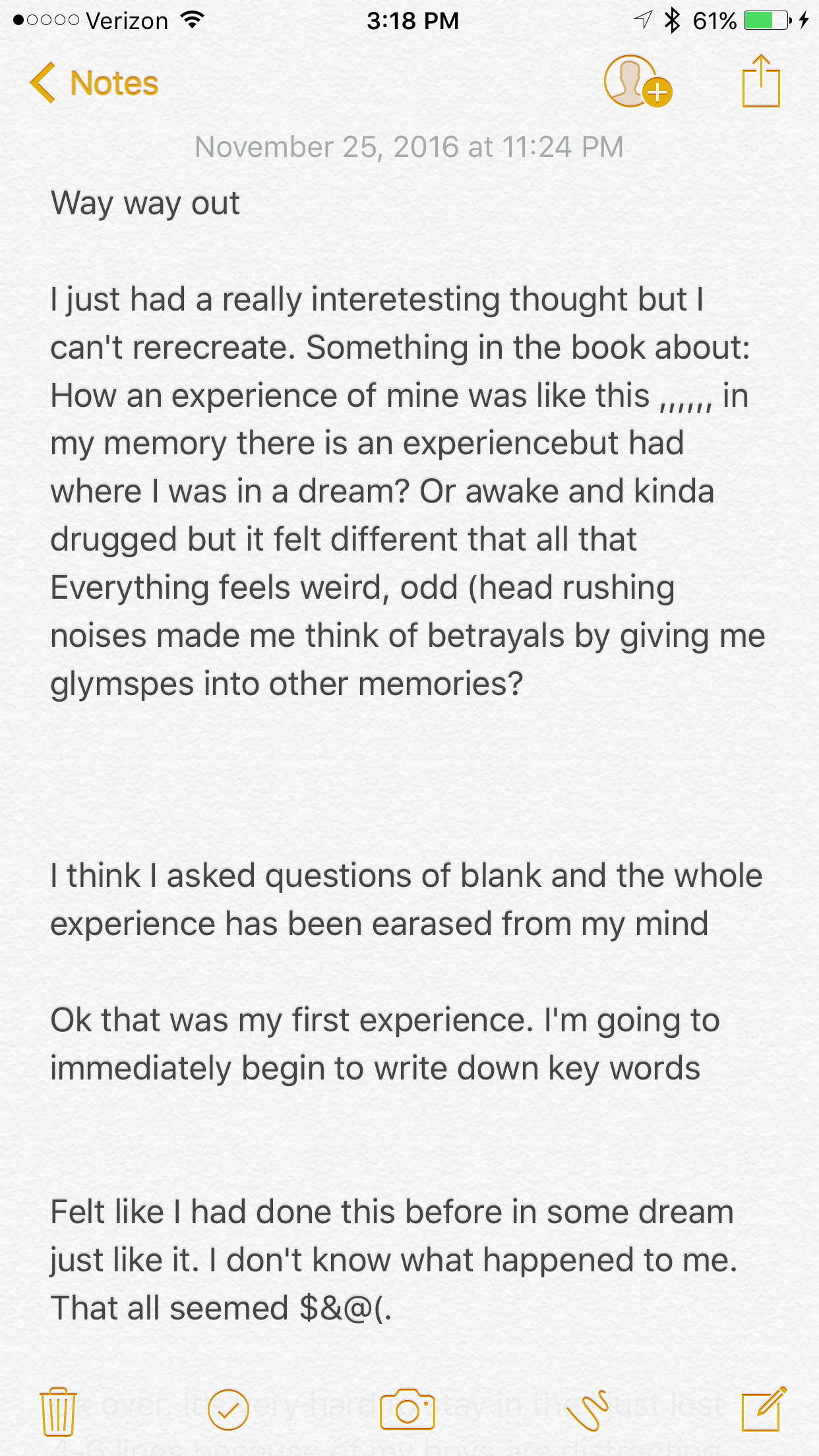 second part of first note (you'll notice the top of this pic and the bottom of the first pic repeat a few lines. Those lines are not repeated in the note, I just wanted to show the readers that there was nothing left out: 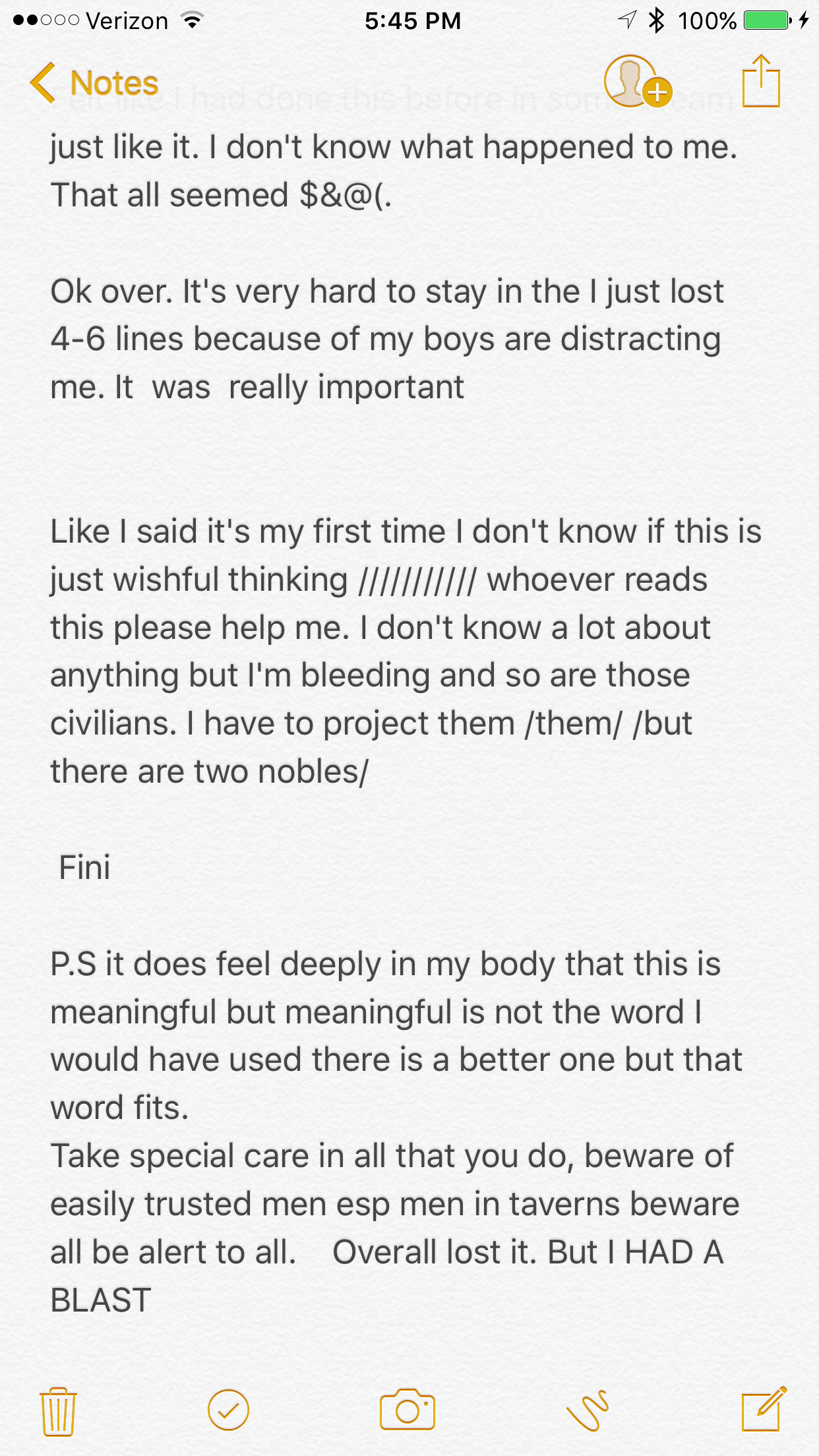 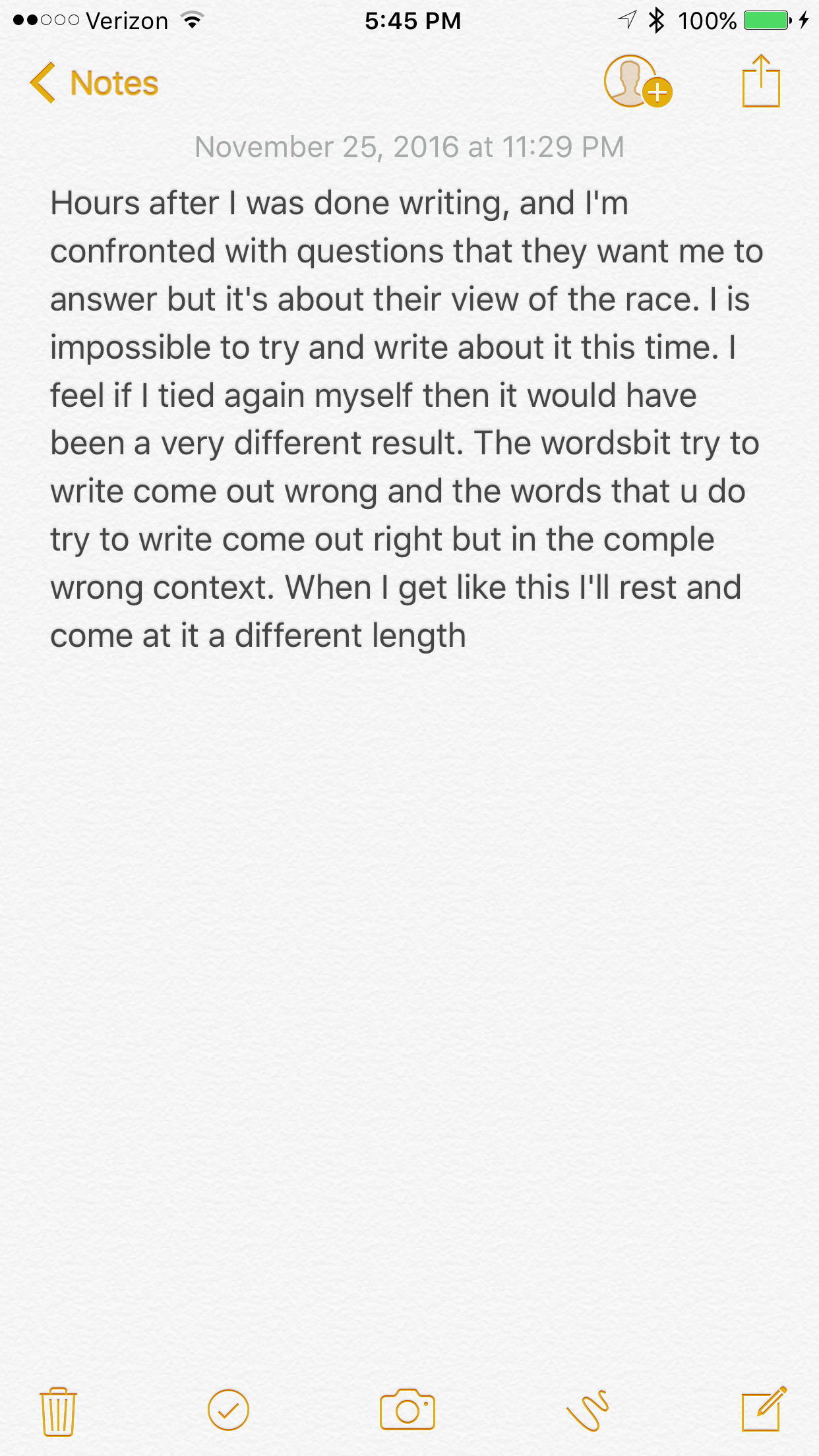 If the pics don't show up, I'll keep trying.

I am guessing that there is nothing to it and that it was just a dream and I must have wrote the notes when I was tired because I don't remember writing them.

Has anyone heard of something like this? Does anyone have any theories, or does everyone think its just a weird dream?


MODS: I didn't know where to put this, so if you need to move it please do so instead of deleting it. I'd appreciate it.

posted on Dec, 30 2016 @ 08:28 PM
link
I would say it is probably a side effect of the combination of sleep deprivation and taking Ambien, One of the side effects of Ambien is.

Some people using this medicine have engaged in activity such as driving, eating, walking, making phone calls, or having sex and later having no memory of the activity. If this happens to you, stop taking Ambien and talk with your doctor about another treatment for your sleep disorder.

Enjoy the notes to yourself.

It is weird, but how often do you get something from you that you didn't do?

I see what your saying and I agree that it was probably that, but it is weird that I've never had that problem on ambien before. But I guess side effects can come on at any time.

I'll tell you it kinda freaked me out a little when I first saw it. Haha

Yea it's weird. It'd be cool if someone else on here had a similar experience.

I had wisdom teeth yanked and they put me out. In recovery I had a scuffle with the nurses because I had to wash my hands (for some reason). I don't remember the event, but I did get to wash my hands.

No one was seriously hurt.

I would agree that is probably the ambian and sleep deprivation. Personally I am at least partly aware when I am doing streams of consciousness writing.

Yea we have carbon monoxide detectors on every level and in a couple rooms. The furnace and hot water heater are three floors below me.

The last part of your last note , I cleaned up a bit:


It seems like some kind of alien entity wants to see if you can be used as a channel .
Looks like you ( and they?) need more practice. Problems with the translation process .
Perhaps the "tuning /training" process requires the act of not just mentally thinking words, but also
physically writing those words?

posted on Dec, 30 2016 @ 09:43 PM
link
I feel like that when I take ambien and don't fall to sleep...I often text the girls I like or take just random notes like you ...I feel the sudden urge to Express my feelings and/or to be sameplace else completely.

least i know who broke the shower curtain rail now.

Well I gotta admit that would be pretty awesome. I wonder how I would try that. I've never really been into that stuff before but I could sure use an experience like that.

I haven't had something like that happen to me before or after (that I remember).

I try to have an open mind on things but I would think that if some being wanted to use me as a channel that they would have tried multiple times. Also, being able to remember it would make it easier I assume.

Plus if it was something like that, I'd think other members would have either had a similar experience or heard of it. Your the only poster who mentioned something other than it was the Ambien (it's still weird that I never had side effects before, my wife would have certainty noticed). But it's definitely hard to think of something other than the ambien being the cause. Some of the phrases are kinda creepy.

posted on Dec, 30 2016 @ 10:58 PM
link
Ambien man... My mom is use to take it and she was getting qvc packages delivered almost daily for a month.... Turns when she was on the Ambien she was ordering crap and never realized or remembered doing so.

Our subconscious has a method of talking to us that is very dream like. How we interpret those "ideas" is how we define ourselves.

There is something to be learned here. Nice thread!

Let us know how it works out!!

posted on Dec, 31 2016 @ 12:45 AM
link
I find notes to myself from myself that I dine ferment writing all the time. They increased in frequency when I bought dry erase markers for the fridge.

The trick is to really love drinking whiskey.

posted on Dec, 31 2016 @ 02:17 AM
link
One night in college I had gotten spectacularly smashed and woke up with a note beside me that said something along the lines of "I'm completely serious, if you ever fck with my time line again I will (I don't remember what, but something bad). And yah, I was just messing with myself. Either that, or either I or something else tried to alter my timeline. Guess which one is the likely answer?

posted on Dec, 31 2016 @ 03:05 AM
link
I've never heard of this tablet but a quick search brings up a whole multitude of stories some pretty scary!

Sounds to me like this stuff shouldn't EVER be prescribed

Automatic Writing is what first came to my mind.

Whats weird is the ambien is being prescribed to help someone with insomnia, but what I am reading is that instead the powerful brain of those with insomnia are somehow over riding the effects of ambien and as a result they are in a somewhat waking state (not really asleep), and during this state, are doing weird things that we define as not normal for a typical waking state.

I remember when I went into the hospital to have my babies, I couldn't sleep. Guess what they prescribed, ambien. It didn't work. I tossed and turned the whole night after taking it. I thought to myself that the hospital would have their stuff in order... and be sure to give me something that would actually work, but it did not. But how are they to know if a particular drug will work on everyone or not. Just seems like according to this thread and your link, that alot of people are saying it doesn't quiet do what its is intended for.

It does however appear to be opening up other doorways in the brain. Might be worth further research in the industry.