posted on Dec, 27 2016 @ 06:57 AM
link
So I was about to post a funny remark on an alien thread here and I stumbled across something curious. For my post I wanted to take a snippet from the lyrics of the 80's song Rapture by Blondie. So I did a search on the lyrics for Rapture.

At the top of my search results was this from Google Play Music...

Huh???? That ain't right! After a couple seconds looking at this anyone familiar with the original song will see these lyrics aren't correct at all!

Gee, that looks a little better!!

You are so right. I will add the video.

Kinda' like having a credible Big Foot sighting, huh??

Hm well, if the song is changed along with the lyrics as in the YouTube video says the "new wrong" lyrics then maybe it is?

I don't remember the song well enough to know and I motice it's hard to hear what she's singing..

I just accidentally saw one of the ones that bugs me. It was a picture of a cat trapped in a vending machine. The caption said "vending machines are getting weirder" ok ..
but the comment under the picture says something like "I wanted a kit-kat I don't think this is right." something like that..

Do you see the issue?

Google auto fill gets it wrong all the way down. 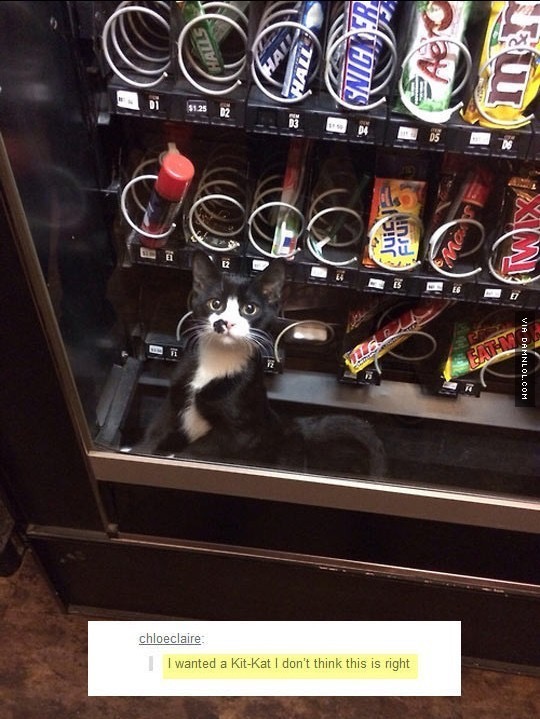 And don't get my started on tidycats.. kitty litter.. that mofo was tidycats then tidycat which confused me to the point I picked it up and showed my then girlfriend. Like why the heck is it tidycat ?? I made a big deal about it she didn't seem to think it was weird.. well now it's back to tidycats... i searched for this particular instance and not only do I see others confused by it changing names but others saw it as tidycat knew it was wrong got very confused bought it anyway only to check their closet one day and it's back to tidycats..

Least that one was nice enough to go back. Now give me my kit-Kat back