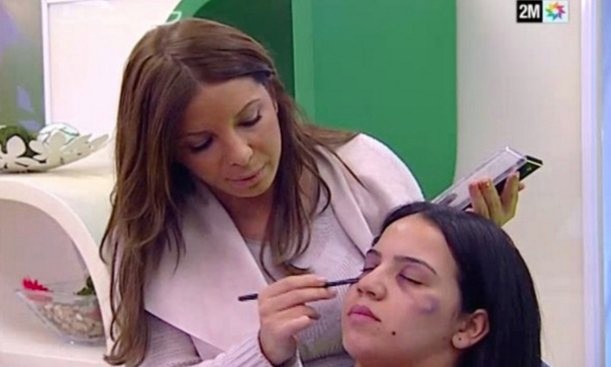 Women in Morocco have reacted in horror after a programme on state television demonstrated how they could use makeup to cover up evidence of domestic violence.

The segment in the daily programme Sabahiyat, on Channel 2M, showed a smiling makeup artist demonstrating how to mask marks of beating, on a woman with her face made up to appear swollen and covered with fake black and blue bruises.

“We hope these beauty tips will help you carry on with your daily life”, the host said at the end of the segment, broadcast on 23 November – two days before the International Day for the Elimination of Violence Against Women.

Equally amazing were the HRC SJW supporters who seemed to have had no problem with this: Inside the Clintons’ Moroccan money ‘mess’

Ok either you have proof (quotes from "HRC SJWs") of this or you're talking out of your hyperbolic ass.

I'll go with the latter.

No ones daily life should have to include using make up tips to cover the bruises from a beating.

posted on Nov, 27 2016 @ 03:19 PM
link
Surely a burka will do that more effectively, that would go some way to explaining their popularity.

To be clear, I was indicating that her supporters didn't care where she got her money from, even if it came from sources that institutionalize the very evils they say they are against.

All one needs to do is search the Moroccan donation stories written at the time and read her supporter's comments.

posted on Nov, 27 2016 @ 03:31 PM
link
The fact that they thought this was a good idea gives me a horrible notion of the extend in which domestic violence takes place in the average Moroccan family. What were they thinking? If anything, I hope the reactions to this broadcast will provoke actions against domestic violence. a reply to: loam

But, But... They are a member of the UN Human Rights Council (along with Qatar and Saudi Arabia)

I picked up a client this week (Emergency Medical Tech..) dressed in full black Muslim garb. She had a black eye...and in talking about reading things to become tired after she said she couldnt sleep... in broken English she said to me "NO! Me no read. No school!"

In other words...this 60 something lady from Yemen I think...couldnt read because she's never gone to school. Her sudden appearance of a black eye wasnt there the last time I saw her a few days earlier.

These things are strange to us...customary in their cultures. I listen, Im polite, I dont touch or intrude...and just try to be professional and really cant ask....

Every day in Dearborn Mich...Im stunned by culture shock. Just the ways they believe...and they do not adapt to this country's culture...they come and retain their. Some of it is illegal.

Yeah and there's that peaceful, loving mindset rearing its ugly head again. No, it didn't make mention of any religious reference, but the inference is there since this was a show originating in Morocco.

I hope the young EX muslim religion lady who proclaimed her happy escape from its awful chains (saying it nicely) will be able to spread her story and help make it possible for others to follow in her footsteps...and BE SAFE while at it! Someone like her and those who follow can and will go a LONG way to dispelling the very negative (again, putting it nicely) feelings toward them that many, many people have towards them and their culture. It starts with just one or two, kind of like Malala in her brave fight.

You're very correct zOOmster, and publicity of this sort is actually good in that it openly demonstrates that which MUST be addressed and put a stop to. It won't end tomorrow or even probably 5-10 years from now, but it does have to start somewhere, some time. CENTURIES of this behavior, passed from generation to generation, is hard to put an end to...but, I believe it can be done. HAS to be done!

And, oh yeah, WHY of ALL people on earth were the SAUDIS placed in, on or about ANYTHING to do with Human Rights? I nearly gagged when I heard it had actually been a done deal. And I read an article saying that England actually pu$hed that through, but for the life of me, I don't remember why. The how ($$$$$) is there, just not the reason. Does anyone out there have ANY sort of a clue??

This is just wrong, so wrong.
I'm literally shaking my head with this one.

i thought this was common knowlidge .. guess not.

It's amazing that they're asked, pointedly, to keep an eye out in their communities for anything or anybody who could possibly be a criminal or involved in criminal activities...and turn a blind eye, deaf ear to it all. You comment that some are involved criminally...WHY aren't you saying something to the authorities?! Even anonymously?! Or do you? If you and others also turn a blind eye, that adds up to two blind eyes...TOTALLY blind! "Move along. Nothing's happening here!" I'd think ANY help that could be given in order to rid Michigan, or anywhere else in the US, of criminal elements... especially them, would be appreciated by EVERYONE! And everyone knows why, so don't even point a finger and yell "PHOBIC"! Or "racist"...it's being REALISTIC, and I couldn't care less if it's not a lil' ole P-freakin'-C statement! That's one term that truly needs to become obsolete (for the sheer stupidity of it) in the face of the problems we face these days. And I'd bet there's more than a scant few not enamored with an enclave having rooted itself in Dearborn....

No, my question turned instant rant doesn't equate to a call-to-arms, it's a call to SANITY.
edit on 27-11-2016 by Rubicon3 because: (no reason given)

A city employee, and 1st Responder affiliated with Police and Homeland Security...I ALWAYS report things. Sometimes up through channels, other times by the anonymous cal line to local police. In this city...at least we have that.

Interestingly and perhaps distrubingly....the police response to cultural reports....is guarded...held back a bit over our laws....as their cultural traditions take precedent when police, fire and me (EMT) arrive on scene.

I've not been able to go into a scene because I was a male....and had to wait life threatening minutes for a female responder or one of their male family gets there.

But...I'm always on duty or on call...one or both 24/7 365....and report EVERYTHING. This Morrocan thing is an everyday occurance considered acceptable by those cultures.

And I will tell you...this is nothing compared to some things.

Women in Morocco have reacted in horror after a programme on state television demonstrated how they could use makeup to cover up evidence of domestic violence.

The segment in the daily programme Sabahiyat, on Channel 2M, showed a smiling makeup artist demonstrating how to mask marks of beating, on a woman with her face made up to appear swollen and covered with fake black and blue bruises.

“We hope these beauty tips will help you carry on with your daily life”, the host said at the end of the segment, broadcast on 23 November – two days before the International Day for the Elimination of Violence Against Women.

Equally amazing were the HRC SJW supporters who seemed to have had no problem with this: Inside the Clintons’ Moroccan money ‘mess’

How dare you point this all out about a islamic country !!11