This entire speech sounds just like it's out of Trump's own stated mission --
It got big applause and a standing ovation in 1995 --
And it was delivered by Bill Clinton.
It was a state of the union speech no less.
www.youtube.com...

All Americans, not only in the states most heavily affected but in every place in this country are rightly disturbed by the large number of illegal aliens entering our country.
The jobs they hold might otherwise be held by citizens or legal immigrants.
The public services they use impose burdens on our taxpayers.
That's why our administration has moved aggressively to secure our borders more, by hiring a record number of new border guards.
By deporting twice as many criminal aliens as ever before.
By cracking down on illegal hiring.
By barring welfare benefits to illegal aliens.
In the budget I present to you we will try to do more to speed the deportation of illegal aliens who are arrested for crimes.
To better identify illegal aliens in the workplace, as recommended by the commission headed by former congresswoman Barbara Jordan.*
We are a nation of immigrants.
But we are also a nation of laws.
It is wrong and ultimately self-defeating for a nation of immigrants to permit the kind of abuse of our immigration laws we have seen in recent years and We. Must. Do. More. to stop it.

So 21 years later the problem is massively, massively larger, both in overall incoming and in everything associated of course -- crime, costs, etc. -- and this was a big enough deal to be part of a state of the union speech back then.

* Barbara Jordan, an amazing woman, for those who don't know who she was: 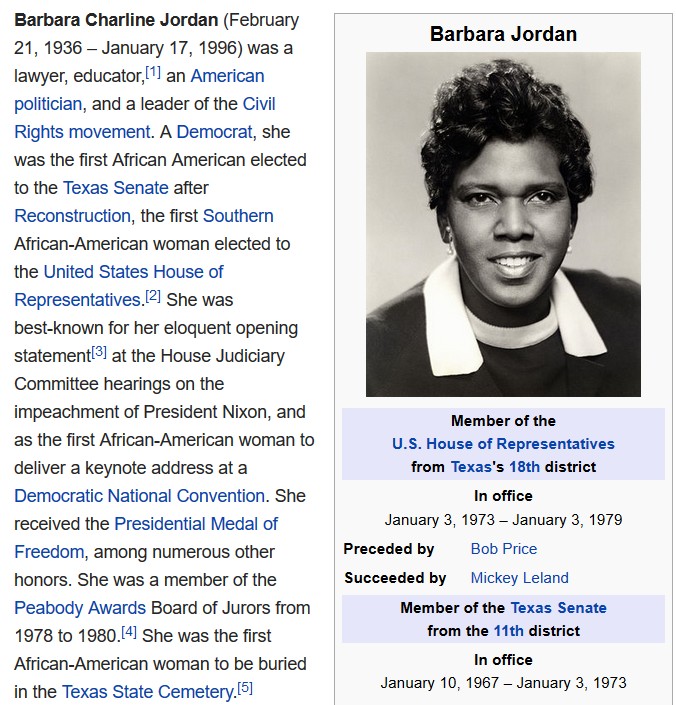 So what happened? A black democrat civil rights senator leads the official plan, the democratic president takes at least one or more of her committee's recommendations for the official presidential plan, and that's to deal with the problem way back then.

But if all the efforts we've made so far still have these insane numbers, building a wall to assist border security is....

... racist? nationalist? fascist? How about "sane?" How about "finally management is competent?" How about "waking up to the reality that what we've been doing isn't working at all?" How come it was great when said 21 years ago, but now that the problem is vastly worse and the situation so much more critical, saying it is allegedly so bad?

I'm reminded of a saying:

The best time to plant a tree was 20 years ago.
The second-best time is now.
-- Chinese proverb

posted on Nov, 20 2016 @ 07:02 AM
link
If either run for office again, this might be relevant. I will file it with the reams of other Clinton propaganda.

So both the Clinton's agree with Trump. Interesting to say the least. I guess if those are the people who's families you are trying to get votes from you have to denounce it.

originally posted by: MOMof3
If either run for office again, this might be relevant. I will file it with the reams of other Clinton propaganda.

This is relevant now. Many individuals out there protesting Trump's immigration stances are more caught up in media proproganda than the reality. Where we're the racial slurs against Bill 20 years ago? Why attack Trump if he is saying exactly the same thing as was advocated for by the democrat party at the start of the Clinton Presidency?

Perhaps, the protestors really need to recognize this fact and give Trump a chance.

Can it wait til January? Then Trump can do whatever he wants and write his own immigration policy.

The protestors are not going to stop because Trump keeps feeding the fire with his cabinet choices. He is not a peacemaker and Christians voted for him. Actually, I call the sects anti-Christians now.

posted on Nov, 20 2016 @ 08:29 AM
link
Before NAFTA we had a small trade surplus with Mexico. Now, a massive deficit, loss of jobs and an illegal immigration problem that is out of control and the problems that go along with it like drugs, gangs and murder.


Obama and Hillary were never going to deal with it. All they ever wanted were stupid new voters to keep their party in power.

originally posted by: MOMof3
a reply to: CynConcepts

Can it wait til January? Then Trump can do whatever he wants and write his own immigration policy.

The protestors are not going to stop because Trump keeps feeding the fire with his cabinet choices. He is not a peacemaker and Christians voted for him. Actually, I call the sects anti-Christians now.

Them idiots don't even know who is SecDef now or can recognize Joe Biden's pic and you believe they know anything about who is getting picked for Trumps cabinet?

originally posted by: Dr UAE
and here is another one for you


Wow, would you look at that! Perfect for this thread, thanks!

It's literally into "Big Lie" territory at this point, the media stuff.

Amazing isn't it? Like most people don't know who really signed NAFTA into law.

originally posted by: MOMof3
a reply to: burgerbuddy

Amazing isn't it? Like most people don't know who really signed NAFTA into law.

But bush wanted to get it signed first.
Bush ceremonially signed the bill in 1992 but it needed to be ratified by the congress and senate before a president could sign the bill into law.
Both parties sold us down the river.
edit on 20-11-2016 by Bluntone22 because: Eta

originally posted by: MOMof3
If either run for office again, this might be relevant. I will file it with the reams of other Clinton propaganda.


It's only racist when a Republican says it. When a Democrat says it then it's smart thinking.

Seriously, how old are you? What comes around EVERY election cycle? Immigration and veterans. Neither party is capable of fixing either or winning wars. I just like to pick on republicans because they are always picking on Hillary. I don't think republicans will know how to assemble without a Clinton to talk about in politics.

I am old enough to remember NEVER hearing Democrats call any of the Democrats racist for saying many of the same things Trump said.

Maybe you should take your advice and grow up and realize the problem is the hypocrisy of it's only wrong when your guy does it.

ETA: Oh and I am not a Republican, never have been, my family is very Liberal and I grew up in Massachusetts. Try harder.
edit on 20-11-2016 by OccamsRazor04 because: (no reason given)

Oh this is about defending trump. Yeah, you are going to be doing a lot of that. He is a racist, but he will do it beautifully.

posted on Nov, 20 2016 @ 07:29 PM
link
a reply to: MOMof3
I have seen you on several other threads and you are a textbook troll. At least after my comment on one-liners more of your posts have more than one sentence in them. Still, you aren't real. I'm sure you get paid by the hour or post, troll on other peoples' threads.

I've been at ATS for ten years and this is the first time I have ever been so convinced someone was fake I called it out.

It is almost like things have changed in the last 20 years.

Clinton will never run for office again. She'll be lucky
if she makes it outside once a month to walk her dogs.

Aside from that, the electoral populate voted her NO.

She can take her cult following off a cliff for all it matters,
America has had its last showing of the Cult of Clinton.

Show over, the house of Clinton is done.

The only question now is how many months can
her "followers" cling on?