The orchestration of civil war in the United States.

posted on Nov, 10 2016 @ 09:48 AM
link
I, like many others, was surprised when Trump was selected to be the President of the United States. We all know the system is rigged (our President elect even brought this issue up) so what exactly were the puppetmasters doing this time around? More importantly, is it working?

So let's talk about the players in this tragicomedy.
We have Hillary Clinton-- corrupt, villainous; the very definition of "The Establishment."
We have Donald Trump-- brash, divisive, primed to hit people viscerally, whether it be to tap into their fears (illegal immigrants, radical Islamic terrorists) or their hopes (this guy is here to destroy corruption, to make America great again, to stick it to the Man!).
We have the American people, primed by MSM to fear, distrust and despise "the other," whether that be a partisan, race or class issue, or all three.
We have the media, which we all know is owned by a few very rich powerful people, feeding us fear and hate on a daily basis.. inflaming old racial tensions, deliberately partisan, sensational, appealing to people's mose base emotions.
We have the internet-- a seemingly infinite depository which provides loads of information.. some factual, some not, and provides forums for people to anonymously spew rhetoric which they will not be held accountable for.

So the internet has, in a sense, made the plebs aware of the secret operations of the elite. But it is also full of disinformation and an excellent medium to spread propaganda and inflame the passions of people. And all the while we are gathering info on the elite, they are gathering info on us.
TPTB know the average citizen has come to truly despise the establishment and is ready to throw aside their serfdom in favor of self-reliance. Whether said citizens are capable of self-reliance at this point in time is another issue.. the desire is there.
So who better to put forth than a candidate that is "anti-establishment"? All the bankers hate him (do they, he is a billionaire after all) Soros hates him (so we think) the elite owned media hates him, and he speaks his mind! He is not like the impotent president who can't bring himself to say "radical Islamist terrorist" he is not like the SJWs who hate white people but call everyone else racist, and he is NOT PC!
Just the right guy for the environment. He runs a divisive campain. His tweets are picked up on by the media and his opponent and shock those who don't subscribe to his beliefs.
Meanwhile his opponent is mired in scandals.
Those who like the first candidate are categorically opposed to those who like the second, and vice-versa. One group supports a criminal, while the other supports a hate-monger. One group is treasonous, while the other is deplorable. Even darker rumors whirl. The democrats are hiring thugs to disrupt rallies. They might be involved in a child sex ring. And all the while the elite-run media fuels the flames.

But no one really thinks Trump will win. So when the email scandal is reopened a week before the election, people are pissed! On both sides people are worked up into a fever-pitched frenzy. Trump supporters think the whole system is rigged and they will have to accept a criminal as president. Clinton supporters think that the Alt-R is nuts, full of crazy conspiracy theorists and racists, and are deep-down afraid because they can see support for Trump everywhere.

The day after the election is unlike any other election in the history of the US. Clinton supporters are crushed, they can't look Trump supporters in the eye, thinking that they are all racist misogynists (from Trumps own words) and that a reality TV star has just been elected to run their country. Trump fans are elated, still full of disgust towards Hillary and towards the population which is labeling them as racist misogynists.. enboldened by their win..
Everyone takes to twitter.. some take to the streets..
So, ATS.. how does this play end? It is up to us. Do we do what the elite tells us or do we break the chains? Time will tell.
edit on 10-11-2016 by zosimov because: (no reason given)

posted on Nov, 10 2016 @ 10:23 AM
link
It's not over yet, not by a long shot. The countdown to January 20th has begun. He may have been "pledged" but the Electoral votes are not officially counted yet and won't be until next month. Assuming those votes work out like predicted he still has to make it to inauguration alive.

I am cautiously optimistic, but still can't get the image of a crowing Hillary Clinton celebrating her "victory" out of my head.

posted on Nov, 10 2016 @ 10:28 AM
link
It´s what i say the whole time, the US citizen were fooled the worst way. The were incited against each other, that was one part to accomplish with that election theatre play to fool the people. Now they start maybe riots or a civil war, so their ultrarich rulers behind the curtains can play the saviour, "saving" the people from each other. With total observation. With a military like police, the raiding party of the rich, that doesn´t care for taxpayers life. With new anti-democratic laws, with steeling more and more of their freedom and liberty. With a Hitler/GeStaPo-like USA.

You NOT RICH(the outstanding majority) people in the US should unite and end this dictatorship of the ultrarich, of the secret services and all this tools to suppress the people. You should end this democracy simulation, that is administrated by the rich and their secret services, militarized police and stuff. Instead of fighting each other! Because the people you fight are not the cause of the problems, they only are used as a merely functional instrument for the caste of the rich, your rulers. They even sit in the same boat, the "not rich boat", exploited and fooled by the same greedy individuals as the people you fight. They are victims as you are, just instrumentalized by the TPTB!

You have to find a POTUS that is not coming from this caste, a POTUS that represents the outstanding majority of the average US citizens, and not only the big money, that greedy 1%. You have to remember who in reality has the power: 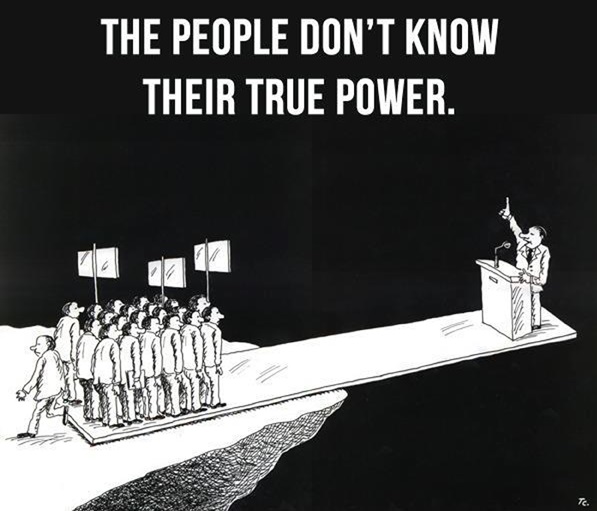 If you really want to fight, than don´t fight each other, but fight the cause of the problems!

That was a fantastic post. I have felt for some time this was written and orchestrated from beginning to end.

Very well said. Thanks for the thoughtful comment, and I agree 100%.

I do have hope for "we the people".

I would say keep an eye on the Facebook and twit feeds (if you haven't gone and unfriended 50% of your connections some time in the last 24 hours, that is). If we see a lot of folks taking to the FB and twittersphere organizing large scale protests, we got a problem. If all we see is just a lot more venting, then this will all fizzle out with time and we will all go on being sullen and disgruntled, but nothing more.

That was a fantastic post. I have felt for some time this was written and orchestrated from beginning to end.

Why thank you reldra. Now the question remains: What can/are we going to do about it? The future is yet to be written.

Great advice! I don't have either (twitter/facebook) but will keep my ear to the ground. Let us know what you find too!
edit on 10-11-2016 by zosimov because: (no reason given)

Very well said. Thanks for the thoughtful comment, and I agree 100%.

I do have hope for "we the people".

Dont you mean you the people who wanted a crooked leader(both are crooked but shes worse) to continue the gravy train?

You're just fueling the fire, my friend. Not that it matters in relation to the OP and to the comment I was responding to, but I voted for Jill Stein whose worse criminal act was throwing up some graffiti in protest of the pipeline.
edit on 10-11-2016 by zosimov because: (no reason given)

You're just fueling the fire, my friend. Not that it matters in relation to the OP and to the comment I was responding to, but I voted for Jill Stein whose worse criminal act was throwing up some graffiti in protest of the pipeline.

I voted Jill stein too btw. I never said i was a trump supporter.

If only more of us had..

We conservatives have been the one sounding crazy for eight years…

Ah, the wonderful FU I got mine of the GOP.

I don't think this latest skirmish will be written in the books.. but there is so much malcontent!

The depressing thing is the potential mankind has for creative positivity.. how much is being wasted.