posted on Nov, 8 2016 @ 03:51 PM
link
In October 2014, a Falcon 50EX, attempting to take off from the Vnukovo International Airport collided with a snow plow that had entered the runway. The crew attempted to take off early, resulting in the aircraft flipping inverted and crashing, killing all 4 on board. One of the passengers was Chief Executive of Total SA, a French multinational energy company. Among the causes were the crew decision to continue the takeoff, despite seeing the plow cross onto the runway with plenty of time to abort the takeoff, as well as possible alcohol use by the plow driver and supervisor.

The supervisor was monitoring three plows at the time, and lost situational awareness, as did the plow driver. The runway was almost completely clear at the time, with less than 1 mm of snow remaining, but the taxiways and roads around the airport were still being cleared after heavy snow. The plow driver lost situational awareness, and entered the active runway, while clearing one of the taxiways, without clearance. The crew was 14 seconds into the takeoff, when they saw a vehicle crossing the runway, approximately 3200 feet from the takeoff point. Instead of aborting the takeoff, the crew chose to continue and attempted to rotate early. The aircraft lifted off at 133 knots, after which the right wing and right main landing gear struck the plow. 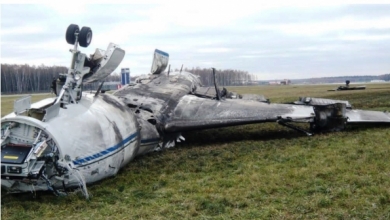 WASHINGTON—Russian investigators concluded that alcohol use by a shift supervisor and a snowplow driver at Vnukovo International Airport played role in an October 2014 runway collision that destroyed a Unijet Airlines Dassault Falcon 50EX and killed all four on board.

The snowplow driver lost situational awareness on a crossing runway and stopped in the path of the departing Falcon. After hitting the plow with its right wing and right main gear at a speed of 133 kt. in a hurried attempt to lift off, the aircraft rolled inverted—despite the pilot’s attempt to counter the bank—crashed and burned.

The finding of alcohol misuse, along with a wide variety of lapses in training and procedures, led Russia’s Interstate Aviation Committee (IAC), to issue 56 recommendations to Russian aviation authorities, the country’s air navigation service provider, the airport and Unijet in a final report published in October.

thanks for the update zap! always interesting to find out the why and how when something like this happens

posted on Nov, 8 2016 @ 04:23 PM
link
My Lord.4 good men dead because a snow plow driver couldn't wait until done with job to tie one on?I was going to leave it at that but report says crew could have aborted.
Blame to go around?

Accidents rarely have one or two causes. They always have multiple causes, and plenty of blame to go around.

originally posted by: Zaphod58
a reply to: TDawg61

Accidents rarely have one or two causes. They always have multiple causes, and plenty of blame to go around.


I'm sure your right Zaphod.But drinking on duty?

posted on Nov, 8 2016 @ 04:32 PM
link
a reply to: Zaphod58
As someone with no record of alcohol screw - ups , this revelation disgusts me.
The presence of a major international ' energy CEO ' is enough to make me wonder ... after all , this is a site which leans towards conspiracy theories .
Any mention of the vodka - swilling maintenance workers over at the aviation dept .?

Oh, I'm not excusing the plow driver by any means. But the crew is far from blameless. If you see something on the runway, you abort. It's that simple. Yes, you might be able to get airborne before getting to it, but you never take that chance. Period. Dot. End of story. The ONLY time you continue the takeoff, is if you have no choice. They had a choice, and they chose stupidly.

I'm sorry for everyone involved.
Tragic.

posted on Nov, 8 2016 @ 07:50 PM
link
14 seconds into the takeoff sounds like they were pretty close to the point of no return. ...I mean with a dusting of snow on the runway the crew probably questioned whether they could get it stopped in time. Anyway it obviously didn't work out to keep going. .....