posted on Oct, 15 2016 @ 04:49 PM
link
As many of you know, a huge storm is headed for the Pacific Northwest. though initial reports of "150MPH winds!" were gross exaggerations, it's still likely to be a pretty big storm. Current reports say it will hit by 3:00 pm in some areas and reach a peak by 6:00 pm Pacific Time. I was hoping this thread could be used for storm updates as people begin to feel the effect. At some point the power is going to go out and we'll star losing Internet connections. On the other hand, the last time we had a big earthquake, the internet was the only thing that stayed up.

It's been raining for the last several days (Good: We needed it as we had a very dry summer.) and last Thursday we had the first storm blow through. I've been up and down I-5 today between Seattle and Olympia. Rain was very heavy at times. It's starting to blow a bit, but nothing to really shout about. Please post updates here as things start to pick up.

A twig just blew across my front steps.

I live in downtown Seattle (Queen Anne neighborhood), its a little calm now. We are experiencing a tad bit of drizzle. Earlier is was raining super hard, but i believe the bad wind storms should be happening shortly here. I removed a lot of the stuff from my rooftop deck already...

posted on Oct, 15 2016 @ 05:37 PM
link
I live in Tillamook Oregon and not much to report here. Had a few gusts, but nothing serious. I'm working at a correctional facility and I see my outside cameras wiggle every once in awhile. Lame storm considering all the hype.

posted on Oct, 15 2016 @ 05:42 PM
link
a reply to: schuyler
I think ti's run of the mill unless you live in NW WA. It's been hyped but for good reason. It could have been bad. It's the job of the forecasters to err on the side of caution. This doesn't happen everyday either.

EDIT: The storm has small wind field and moving fast, contrary to what was feared several days ago. That's what caused the media hype.
edit on 10/15/2016 by jonnywhite because: (no reason given)

posted on Oct, 15 2016 @ 05:48 PM
link
After checking the radar, it appears that the larger storm is northwest of where I am, and heading up toward Washington. Good luck up there.

Update: Oh, yeah. Here it comes. I got my generator ready. USUALLY I can keep Internet going as long as the cable station doesn't get hit.
edit on 10/15/2016 by schuyler because: (no reason given)

Hope everyone is safe and keeps their power.
edit on 10/15/2016 by Olivine because: spelling

posted on Oct, 15 2016 @ 07:37 PM
link
It was weak where I am in southwest Washington. My father had tickets to the Oregon State football game, but decided not to go because of all the dire warnings. I was telling him all week that he should go and that the storm was not going to be as bad as advertised. Now he's kicking himself that he didn't go.

I'm on the other side of the country but this just appeared on my feed:

I don't know if it matches locals' reports.

It sounds like you live in a very interesting place!! Good luck!!

posted on Oct, 15 2016 @ 08:20 PM
link
We were just down at the beach in Edmonds, and it was gusty, but not very bad. The tide is pretty high, but the waves were not any worse than a typical storm. Its ok, we got a Seahawks game to watch tomorrow, so no power outage is a good thing!

posted on Oct, 16 2016 @ 01:02 PM
link
I guess we can call this megastorm the Big Fizzle. Power was out for a few hours. As far as I can tell there was very little damage. Thursday's storm was better. Oh, well. Maybe next time. 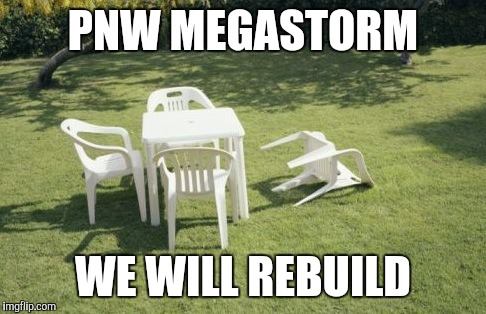