TRUMP is winning Check This Out !

originally posted by: Blue_Jay33
Notice the blue shrinking as time goes on.

Yes it defies all logic, but this election cycle is crazy like that

True, but there is a pattern that has emerged from those maps from April 2016 until today.

posted on Oct, 11 2016 @ 09:06 PM
link
a reply to: Blue_Jay33 well in each progressive map the numbers of people polled shrinks by about 75% if my math is right. That may account for the increase leaning towards a candidate.

That looks like an online poll? Those aren't very reliable.

Go to 538, which is based on scientific polling as opposed to unscientific web polls.

posted on Oct, 11 2016 @ 09:26 PM
link
Ron Paul also had A strong Internet presence, he had the loudest most loyal supporters, he was filling up stadiums.

Same with Trump, but having the loudest loyal supporters means nothing when it comes to Election Day.

Just look what they did after the first debate, they actually flooded polling sites like these, linked through 4chan and Reddit to say that Trump won even though he got a beat down.

I don't trust a single poll that has Trump winning and that's only because of the BS they tried to pull that day.
edit on 11-10-2016 by RedMenace16 because: (no reason given)


cassp83
+25 more
posted on Oct, 11 2016 @ 09:33 PM
link
I think it's pretty obvious that the people who support Trump (for the most part) don't want to be outspoken about it. Because there is so much controversy surrounding him, the supporters support silently. I have a feeling that we are all going to be shocked when he wins by a landslide.

It really is hard to understand that Trump is being attacked for what he SAYS Vs. Hillary who can be damned for what she (and her husband) actually do. You would have to be insane or corrupt to vote for Hillary.

originally posted by: 1Angrylightbulb
Well the last link showing him winning most of the states only has a sampling of 105,000 voters. That averages out to 2,075 voters per state. That's is a very small sampling of voters per state to say he would win them.

CNN has Clinton winning, with only 535 surveyed...NATION WIDE.

originally posted by: Metallicus
a reply to: Blue_Jay33

You would have to be insane or corrupt to vote for Hillary.

GOP Trump defectors fits those categories. Add the category of TRAITORS for them.

It is why the media is in a frenzy of collusion with the Clinton campaign, the billions of dollars spent on attack ads.

If she is such a great candidate easily beating him, why the blatant main stream media help? Why do they rig things even against Bernie Sanders like feeding Hillary a day before town hall questions in advance while poor Bernie had to face the questions with no cheating pre preparations? They did it then and are still doing it, because Hillary is a weak candidate that nobody likes.

They will win a few precincts where they bus homeless people around to vote over and over again till the polls close but it won't be enough to make a dent.

Now today with WikiLeaks, it came out that her campaign denigrated with absolute disrespect Catholics and Evangelists in their conversations. That is a voter base that they needed to turn against Trump. Donald's eleven year old tape of locker room banter that they held as their big ace in the hole just got tossed out the window. The Sunday services will be filled with the directed ire and disdain of Hillary's attitude showed towards the very religious crowd her campaign depended on to be offended the most by Trump, God certainly works in mysterious ways lol.

There are many things about this election cycle that remind me of the period immediately before the landslide defeat of McGovern. I do not know anything about the way those maps are generated, but the simple visual is also rather reminiscent of McGovern's defeat.

After the polling was completely wrong on BREXIT I have come to believe that we are living in a post-polling era where the general public simply is not going to play the game of answering polls truthfully and the pollsters are going to sample in order to promote one candidate over the other. That is the recipe that spells an end to such predictive tools having as much value as they did thirty years ago.


originally posted by: carewemust
CNN has Clinton winning, with only 535 surveyed...NATION WIDE.

Well of course she is winning on CNN polls, people call it Clinton News Network for a reason. 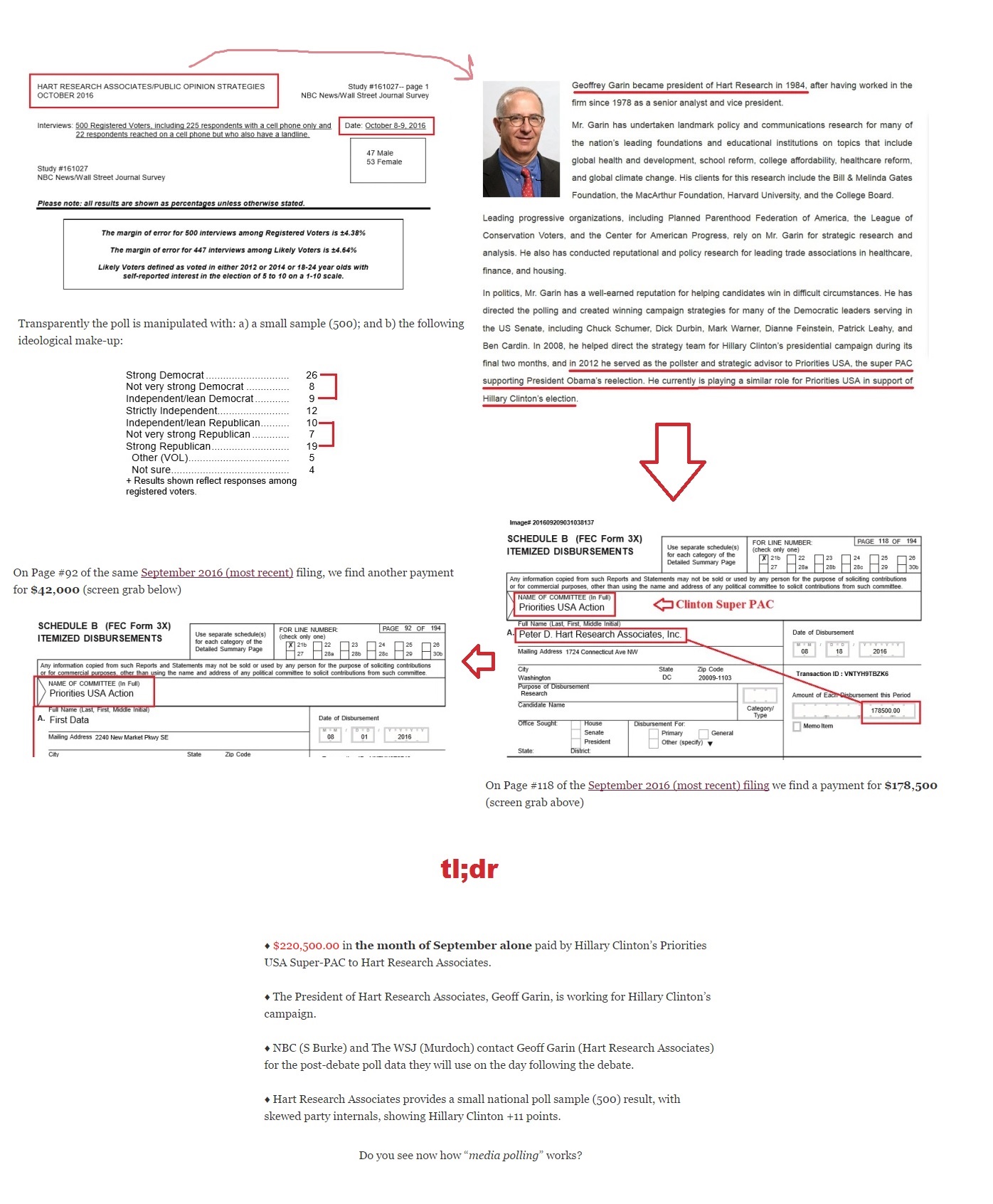 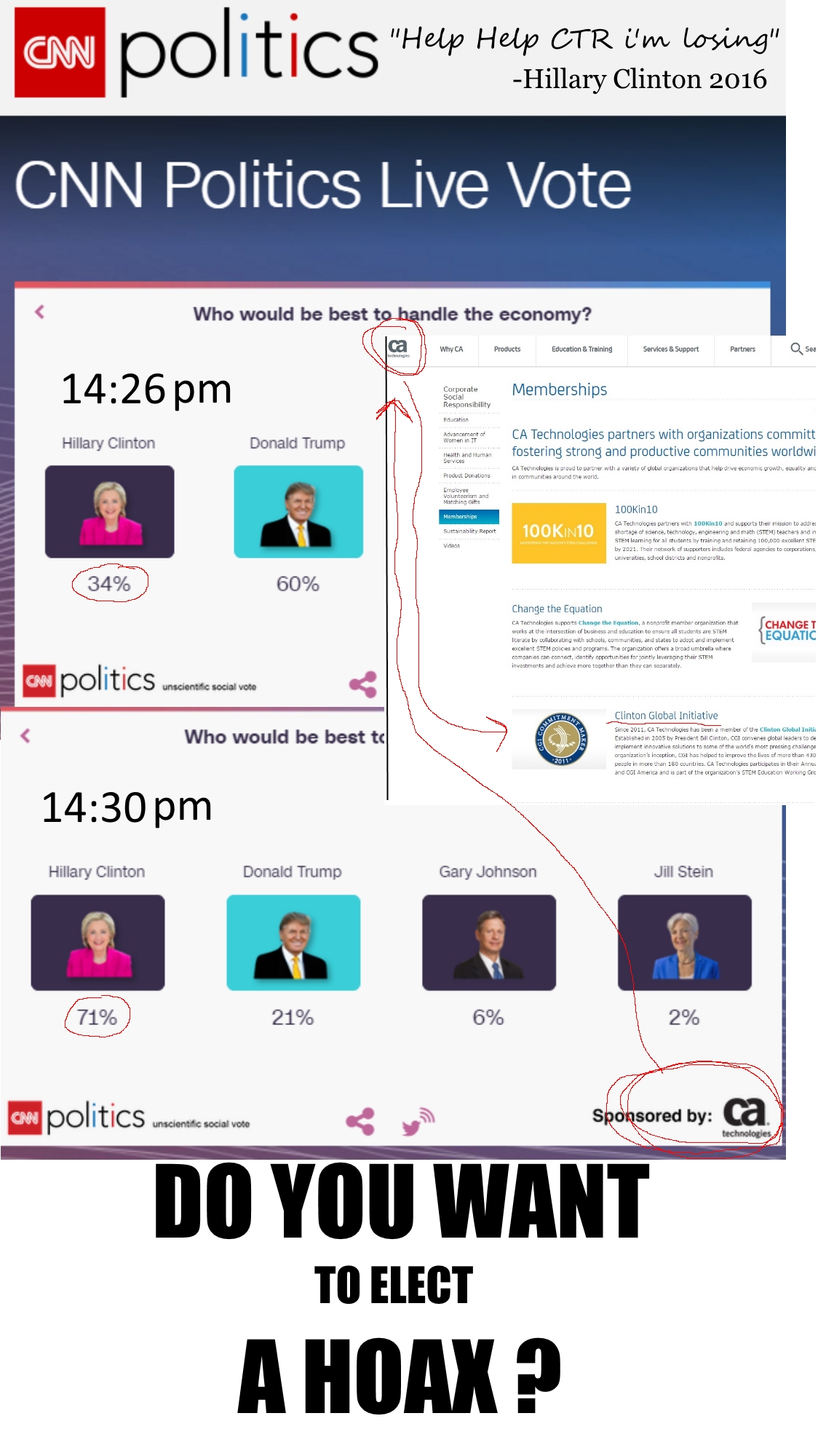 Right. Because the rest of us who aren't conservatives really want a man as our leader who brags about sexually assaulting women. The same man who has a suit against him for raping a 13 y/o girl. You know, I thought you conservatives were sick and tired of perverts in the Oval Office? Funny how you all think men dressed as women will grope your wives and kids in bathrooms but belittle Trumps bragging to locker room talk, because he says so and by he I mean Breitbart, Fox News, and Wall Street Billionaire Robert Mercer.

posted on Oct, 11 2016 @ 10:10 PM
link
a reply to: carewemust I would say the same thing about that poll as well. Not enough sampling of voters to make it a true representation.

originally posted by: Blue_Jay33
Notice the blue shrinking as time goes on.

There's a real problem with their sample. I've used the site several times, so that means that you can answer multiple times. The respondents are self-selecting (people with access to computers) and most who go there are sent by friends and coworkers (who often have an agenda) It's also fun to retake the test and tweak the answers and see if things change. I've done that. So have others.

You need to consider instead polls that do NOT allow someone to answer more than once.

A reality check would include asking yourself how many big names have either stepped up or backed off their support of Trump. They are the most visible face of the party - and you can assume almost no Democrat will vote for him.

Stein and Johnson have locked up 15% or so of the vote, leaving 85% to be split between Trump/Clinton.
50% of all voters are women
Minorities (Asians, Blacks, Hispanics) are voting in higher percentages than Whites (several news stories... you can google for this and confirm it.)

Now, compare that with the number of Democrat Senators who say they will vote for Trump (I don't know of any)
And the number of Blacks voting for Hillary
And Latinos...
And women...


So if the groups more likely to vote are moving away from Trump... I think that the 538 polls and RealClearPolitics polls are most likely predictive and the ISideWith polls reflect people taking it multiple times and sharing with friends and family.