Juanita Broaddrick, the woman who famously accused former President Bill Clinton of raping her during his 1978 gubernatorial campaign in Arkansas, took to Twitter Wednesday to address Chelsea Clinton’s downplaying of her father’s sexual misconduct. “Here is my response to Chelsea Clinton’s statement about her father’s sexual misdeeds,” wroteMs. Broaddrick, a Donald Trump supporter who stepped back into the national spotlight recently after years of silence about the alleged rape. “Chelsea you said you don’t remember a time in your life that your parents weren’t being attacked. There’s a very good reason for this — your parents are not good people,” she wrote in a series of tweets. “[Y]our father was, and probably still is, a sexual predator. Your mother has always lied and covered up for him. “I say again, ‘I was 35 when Bill Clinton Raped me and Hillary tried to silence me. I am now 73. It never goes away,’” she wrote. “The truth is what has brought the attacks on your family and you are smart enough to know that by now.” Ms. BroaddricksaidMs. Clinton is “very aware” of her parents’ alleged crimes, but she’s “too interested in self-gain” to address them.

I like how Chelsea Clinton States that Trump's mention of her father's numerous alleged rapes and sexual assaults are just a distraction for him to not talk about the serious issues, yet her mommy brought up the former Ms. Universe winner years ago, who she gave a debate ticket to and trashed him in front of over 85 million viewers over allegations that Trump called her Miss Piggy and Miss Housekeeping and the list goes on and on. When Trump slings dirt at Hillary Clinton, he is accused of being a racist pig, but when Hillary Clinton slings dirt at Trump, she's just being a strong woman standing up to a big bully. Double standard much? Talk about more Liberal MSM BS trying to spin.

A vote for Hillary is a vote for rapists of women everywhere.
edit on 29-9-2016 by Bloodydagger because: (no reason given)

Well, if Trump is gonna call Bill a rapist than Bill should return the favor and call Trump a rapist as well. So far, we know Trump like to rape his wife. Trump and Bill have a billionaire pedo friend in common and both men like to rape underage girls (see court case involving a 13 y/o girl).

Talk about an understatement!

Criminal psychopathic scrumbag trash would be getting a little bit closer to the truth.


For a nice glimpse into their world, along with the other sick elite...

I recommend Tranceformation of America, by Cathy O'brien

originally posted by: Swills
a reply to: Bloodydagger

Oh, I'm quite sure many here will give Hillary/Bill a pass too. *shrug*

posted on Sep, 29 2016 @ 06:36 AM
link
a reply to: Bloodydagger
This video alone is enough to see what kind of women Hillary Clinton is and how much she cares about other women! If you haven't listened to it, you need to.

More information can be found in this article from The Freebeacon

originally posted by: Bloodydagger
a reply to: Martin75 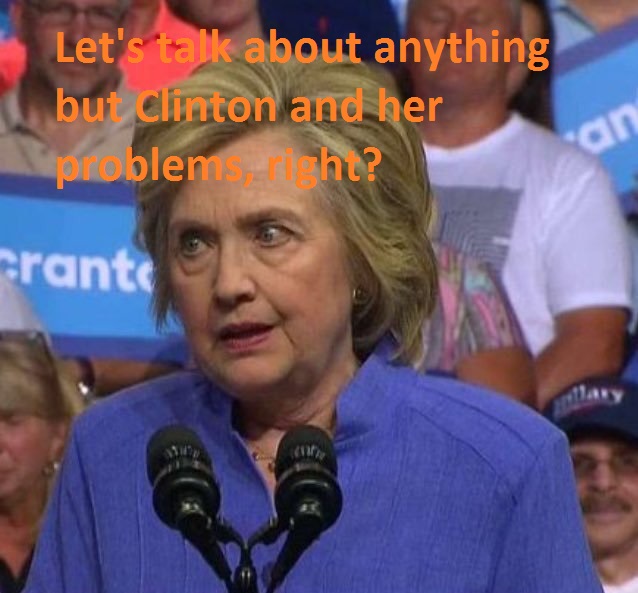 * In my opinion, those people are the worst.

Sure, but I was just joining in to you guys little circle jerk.

As far as the OP? Same as it ever was. Same old tired "scandal". If this was such big news, cause for concern or in the public interest it'd be cool. But it never has been, nor is it relevant to this election. Most people agree. I know because...well, just because.

Look, we all agree Clinton is, or at least has been, less than honest and respectable. I get that. 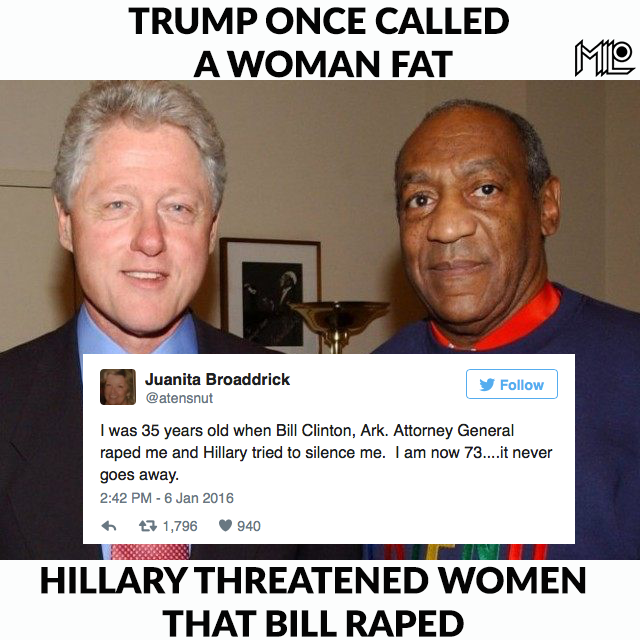 You're quite sure many here, on ATS, will give Bill a pass? Are you new here? This site is about as Anti Clinton as it gets.

During the Paula Jones investigation lawyers found and interviewed this woman and she gave an Affidavit under oath saying there was never a sexual relationship between her and Clinton, unwelcome or otherwise. She was protected with anonymity at that time and has never explained why she would have lied.

During the 1992 Presidential campaign there were unfounded rumors and stories circulated that Mr. Clinton had made unwelcome sexual advances toward me in the late seventies. Newspaper and tabloid reporters hounded me and my family, seeking corroboration of these tales. I repeatedly denied the allegations and requested that my family's privacy be respected. These allegations are untrue and I had hoped that they would no longer haunt me, or cause further disruption to my family.


I think this is a case where she said one thing to friends for attention, but when faced with legal consequences if she was lying, she rightly explained the truth.

You can claim that Bill Clinton somehow forced her to give that affidavit and it is not true...but she is full on accusation mode now, so is obviously under no threat, and even now she has never explained why she gave the affidavit saying nothing happened..

When faced with legal consequences, she said nothing happened...on twitter? it's a whole different story.
edit on 29-9-2016 by Indigo5 because: (no reason given)

originally posted by: Realtruth
a reply to: Bloodydagger

They are not voting for Bill Clinton...They are voting for Trump or Hillary.

Trump can try and smear Hillary with the infidelities of her husband...But all politics aside? It's losing him women voters, not gaining them. That's just reality.


There it is again.

I guess you have no way to put it tastefully.

Tell us more about the MSM while you're posting from links to Sun Myung Moon's propaganda rag.

Weeks after this alleged incident, Juanita Broadrrick was attending Clinton fundraisers. Not minutes, not hours, not days — WEEKS later.

As I remember it, decades later, when GOP strategists got her involved, her witnesses were a friend who happened to be the daughter of a man killed by a man whose sentence Clinton had commuted and her second husband who she cheating on her then husband with at the time.