Having a compertition at work.

I found this. It apparently holds the world record. Instructions on how to make at the link.

when i was kid i used to be all about paper airplanes, me and a couple of buddies even came up a couple of our own designs.

I'll see if i can remeber how to fold the two main ones, one was almost a flying wing, and on a good windless day one of those glided about fifty yards once( half a soccer field worth).

Not a design but a lego paper plane builder and launcher

I loved the flying wing design. I threw one from the field at my intermediate school and it flew well over 100 yards, up over the top of the hill by the school, and into the housing area, never to be seen again.


We ended up folding ours out of legal size paper to get the little extra wing span, the we started tearing flaps into the wings to get them to roll or loop.
Our other plane we called a swallow, as it looked alot like the swallows that lived under the bridges i would cross walking to school.

So what is the airspeed velocity of an unladen European swallow?

Strap a coke-mentos JATO on one... then you would have something!

I usually turn up the wing tips and put a slit in the back to give it a tail for looks. Firecracker so when the antiaircraft hits there's an explosion and crash.

None of my GI Joe's lived to be veterans. 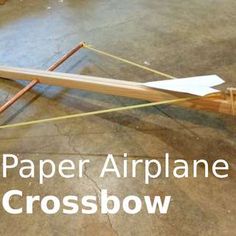 That will impress the folks in the office.


Ummm...We used to coat them with a light coat of wax and sometimes use a penny for weight...There's a special throwing method where you place the index and ring fingers alongside the forward fold...With the plane hanging tail down by your thigh you quickly bring your hand up and snap your wrist while letting go of the plane nose first...

Give it about a 5-10 degree above horizontal trajectory and they should fly for hundreds of feet...

Of course...I haven't tried those methods in about 35 years...but they provided endless hours of fun as a young'un...

I've seen a few videos of great designs going a long way. There was even one at an English football game that travelled from the stands to somewhere near the centre-circle.

The guy here, John Collins, won a world record and has a book out on how to make something similar.

In the early Eighties I lodged for some time on the 28th floor of an apartment block in Bombay while being trained in the dark arts of advertising. Since this was India, there was no air-conditioning and you could open the windows.

I’d been keen on paper plane designs as a kid and my favourite was a ogival delta design cut from a single sheet of paper. A long narrow strip about half the length of the paper was left in front of the ogee in the cutout; this was repeatedly folded back to weight the front end. The centre of gravity could be adjusted by altering the width of the fold. the tips of the ogee were folded down 90 degrees to make it fly straighter and add stiffness to the wings. Trim could be adjusted by warping the trailing edges slightly up or down.

I made one of these on a relatively windless day and, after a couple of test flights in my apartment to get the trim right, launched it out of the window.

It soared right across the Colaba Causeway from my building on the edge of the Arabian Sea towards the Back Bay. I lost sight of it while it was still airborne, but from time to time I'd get a flash of it as the planform turned and caught the sun. It was still above the highest buildings in that area, at least half a mile away, before it vanished from my sight.

One of the peak achievements of my life, I have to admit.

My personal favourite, that I've made ever since, was an Origami plane from the 1973 Look In annual if you can find a copy :-)