Donald Trump's campaign chairman (Paul Manafort) was a key player in multi-million-dollar business propositions with Russian and Ukrainian oligarchs — one of them a close Putin ally with alleged ties to organized crime — which foreign policy experts say raises questions about the pro-Russian bent of the Trump candidacy.
"The relationships that Trump's advisors have had with pro-Russian forces are deeply disturbing," said David Kramer, a former senior State Department official in the George W. Bush administration and a former adviser to Marco Rubio's presidential campaign. "Trump's attitude on Russia is not in line with most Republican foreign-policy thinking. Trump has staked out views that are really on the fringe."

With Melania Trump's questionable background, and Trump's own flip-flopping regarding his relationship with Putin, it sure seems like a lot of bizarre connections between Trump and Russia. Maybe there is some truth to the theory that Trump is an agent for Putin, and Melania a double agent/spy?

I'm *mostly* kidding about the double agent/spy thing-- but it IS weird all these connections to Russia and Trump.

And now Trump is receiving classified intel briefings... Anything to worry about here?

He rents to the largest bank in China.

Industrial and Commercial Bank of China has chosen a location known for its international appeal to set up its first US outpost: Trump Tower at 725 Fifth Ave. The bank – said to be the world’s largest in terms of global market value – signed a deal for the 20th floor, about 14,256 square feet. Donald Trump said the tower’s office space is now fully leased.

He has ties to lots of people. He is a global developer.

originally posted by: spiritualzombie
I'm *mostly* kidding about the double agent/spy thing-- but it IS weird all these connections to Russia and Trump.

You know, if the roles were reversed and these connections were being uncovered about Hillary Clinton, you wouldn't need this disclaimer. Most of ATS will have already jumped to the conclusion that she is in cohoots with Russia and will be yelling and insulting anyone who disagreed with them.

Nope, nothing to worry about at all.

Nope, nothing to worry about at all.

Why? Because this is about Trump and not Clinton?

posted on Aug, 18 2016 @ 11:50 AM
link
This is just a nice distraction from Hillary's treason and other horrible crimes.

originally posted by: RobotBomb
This is just a nice distraction from Hillary's treason and other horrible crimes.


originally posted by: RobotBomb
This is just a nice distraction from Hillary's treason and other horrible crimes.

Sometimes I wish I was in Russia.

Nothing but dash cams, fireballs, and people who know how to fight.

Sounds better then a liberal/clintonian US.
edit on 18-8-2016 by GoShredAK because: (no reason given)

Now the clintons did have to hide their dealings with China, and shortly after industrial and military secrets were in Chinese hands...

They do deal in state secrets and governmental issues.

Trump and his people deal in real estate. Malls , luxury housing and such....

also, when was it illegal for people in business to deal with each other?

Every millionaire and up would be in jail at some point for working with the international community also in BUSINESS if so.

Government officials though, they can have conflicts of interest that need be hidden.

Someone "correct the record" please.

She sold out all our domestic uranium to Russia.

Trump and his people deal in real estate. Malls , luxury housing and such....

WTF are you talking about???

Paul Manafort, his campaign chief worked to put Putin's puppet in power in Ukraine before he was deposed..Fact

He is also listed in the Payola-Off-The-Books accounts as receiving millions of dollars from that regime in a current and open investigation in Ukraine...documented
Secret Ledger in Ukraine Lists Cash for Donald Trump’s Campaign Chief
www.nytimes.com...

Manafort also opened a 1.4B dollar shell company in the Caymans to hide a Putin Oligarchs illicit money..on record..
Paul Manafort Questioned by Cayman Islands Court About His Fund With a Russian Billionaire
heatst.com...

General Michael Flynn ..Who Trump brought to his first Intelligence Briefing this week.

After being run out of the Defense Intelligence Agency, he has been working with Russia's State Sponsored Media outlets, been an outspoken America-Critic and spoke at several Russian events and was honored at dinner in Moscow with a seat beside Putin for dinner..And that was just 8 months ago...he only admitted dinner with Putin after the pic leaked.

He is the half-head below on the left. 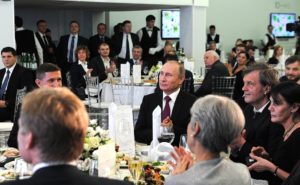 
Michael Flynn, now a private citizen after a reportedly disgruntled retirement, was not there to gather intelligence. His attendance at the RT gala, before which he also gave a talk on world affairs, appeared to inaugurate a relationship with the network—presumably a paid one

At a moment of semi-hostility between the U.S. and Russia, the presence of such an important figure at Putin’s table startled current and former members of the Obama administration. “It was extremely odd that he showed up in a tuxedo to the Russian government propaganda arm’s party,” one former Pentagon official told me.


The Trump campaign had anti-Russian and pro-nato language removed from the GOP platform before the RNC..
Trump campaign guts GOP’s anti-Russia stance on Ukraine
www.washingtonpost.com... 6b37f256_story.html?utm_term=.28a3b3ecaa39

posted on Aug, 18 2016 @ 12:23 PM
link
Completely irrelevant. Really grasping at straws here. Hopefully if Trump becomes President he expels the Anti-Russian warmongering hawks. Confiscate their coats and throw them to the cold.

Lol. Thanks for proving my point.

If the point she will sell out our country. She is a narcissistic politician who will do, say and promise anything.


originally posted by: RobotBomb
This is just a nice distraction from Hillary's treason and other horrible crimes.


But when you add in, Trump intimating he has a relationship with Putin. His asking Russia to commit cyber espionage against the USA to assist his campaign. The Russian hacking of the DNC and leak by Julian Assange essentially doing just that.
And now the questions surrounding Manafort.
The coincidences start to reveal a common denominator.
It's worth a closer look in any event.

Let's see what Flynn says about his departure from the DIA:

Flynn maintains President Obama fired him from the Defense Intelligence Agency two years ago because he took a stand against “radical Islamism,” and claimed Al-Qaeda was expanding its ranks around the globe.

In a recent column for the New York Post, the retired Lt. Gen. referenced his bestselling book, Fields of Flight, when describing how the intelligence gathering arena has become way too “politicized.”

“I asked the DNI [Gen. James Clapper] if my leadership of the agency was in question and he said it was not; had it been, he said, they would have relieved me on the spot,” Michale Flynn said. “I would not change a lick how I operate. Our country has too much at stake.”

The veteran military officer went on to say he was trying to “change the culture” of the Defense Intelligence Agency from an entity which he felt focused far too much on what was going on in Washington, D.C. and spent too little time engaging with forward-based commanders and fighters.

"I knew then it had more to do with the stand I took on radical Islamism and the expansion of al Qaida and its associated movements,” Flynn also said. “I felt the intel system was way too politicized, especially in the Defense Department.”

Lt. General Flynn firmly believes the United States is in the midst of a “global war.”

Flynn dubbed the current Obama administration approach to the war on terror as timid. He also said Obama’s strategy appears to falsely believe peaceful and diplomatic efforts are all that is needed to defeat terrorism in even the bloodiest regions of the Middle east.

“This approach is doomed. “We’re not going to talk our way out of this war, nor can we escape its horrors. We have to destroy the enemy armies and combat enemy doctrines. Both are doable,” Lieutenant General Flynn concluded.

Sounds like EXACTLY who Trump needs to listen to...

posted on Aug, 18 2016 @ 01:33 PM
link
Has anyone looked into where the money Manafort got went to? Anyone? The answer may or may not surprise you.