posted on Aug, 15 2016 @ 09:27 AM
link
October 8 is the election day in west bank and Gaza.
Palestinians will have to choose between Hamas, which controls Gaza and Fatah (Palestinian authority), which rules in the west bank.
This is the first time in 10 years that Hamas agreed to hold an election, and their strategy is very similar to another terror organization we all know.
Either you're with us or you're an infidel.


The first sign of Hamas's frightening platform emerged when one of its top muftis, Yunis Al-Astal, issued a fatwa banning Palestinians from voting for any other party other than Hamas. "Any person, male or female, who votes for a party other than Hamas will be considered an infidel and apostate and his or her repentance will not be accepted even if they fasted or prayed or performed the hajj [pilgrimage] to Mecca," the mufti ruled. This Hamas tactic has worked in the past. In the previous parliamentary election, Hamas used the same propaganda to brainwash and scare Palestinian voters.


A Hamas-affiliated cartoonist from the Gaza Strip, Baha Yasin, published a cartoon that carries the same message as the fatwa. "A Palestinian Muslim does not vote for secular infidels," he captioned a cartoon that depicts supporters of Fatah as unbelievers who smoke nargilas and cigarettes. The caption accompanying the cartoon also denounces the Fatah supporters for "insulting Allah" and Islam. 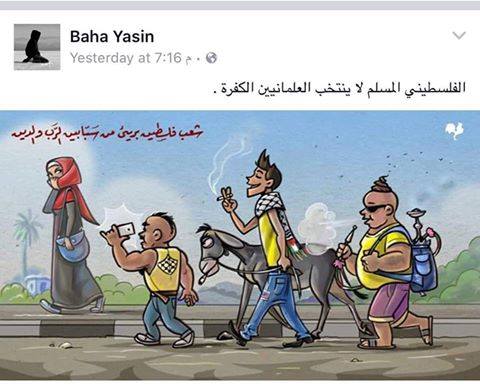 "Hamas has launched its unofficial election campaign by issuing deeds of forgiveness and taking us back to the Middle Ages," said Palestinian political analyst Mahmoud Sabri. "They have turned mosques into podiums for political, and not religious, lecturing. Any citizen who does not vote for Hamas will be closer to entering hell and will be asked by Allah on Doomsday why he or she did not vote for the right people. Hamas wants us to believe that if we do not support them, then we are against Islam and that we are participating in the war against our religion."


Rajai Al-Halabi, who is in charge of the "women's portfolio" in Hamas, also stirred up controversy when she appeared on Al-Jazeera to declare that Islam surfaced for the first time in the Gaza Strip with the creation of Hamas.


Basically more of the same "We are the true Islam. If you are against us, you are an infidel!" BS that is used by ISIS, Muslim brothers etc...
Will Palestinians have the courage to remove these vile terrorists from power and start a new chapter in their history? I truly hope so.
Source

posted on Aug, 15 2016 @ 10:16 AM
link
Well it worked for Muhammad to use duality separation to manipulate his followers to kill those who did not follow him justified by Muhammad:s "divine mandate".

So now Hamas have learned from Muhammad creating their own version of "divine mandate". There is a lot of lines in the Quran that they can use to justify their views.
edit on 15-8-2016 by LittleByLittle because: (no reason given)

posted on Aug, 15 2016 @ 11:19 AM
link
Politicians using scare tactics to get elected whoever heard of such a thing? They must have started watching American politics and how much it works here.