So it was that, in late July 2015 between 20-31st of this mixed-weather month, the Indian Air Force’s 2 Squadron ‘Winged Arrows’ deployed four HAL-built Su-30MKIs from 11 Wing at Tezpur AFS in Northern India for the 13hr, three-day transit over three continents to operate with the RAF’s Typhoon FGR4s of No 3(F) Squadron out of RAF Coningsby, Lincolnshire. Supporting the deployment were a C-17A Globemaster III from India’s 81 Squadron/28 Wing ‘Skylords’, a C-130J-30 Hercules from 77 Squadron/28 Wing ‘Veiled Vipers’, both from Hindon AFS, as well as an Il-78MKI ‘Midas’ tanker from 78 Squadron/41 Wing based at Agra AFS. The Il-78MKI tanker and the C-130J-30 transport were taking part in the exercise itself, each stationed at RAF Brize Norton for the duration, whilst 190 personnel supported the entire Indian deployment. 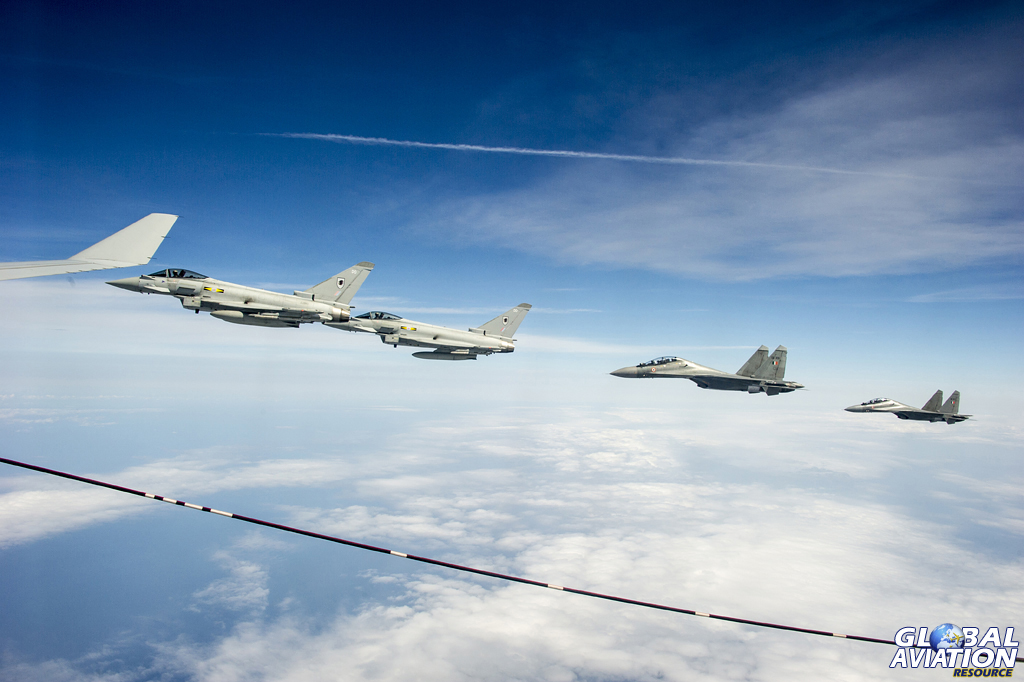 
We operated the exercise on a Crawl, Walk, Run basis’ explained Wg Cdr Moon. ‘The Crawl phase it was familiarisation sorties, getting used to UK airspace – though a few of the IAF pilots were trained at RAF Valley – and simple 1v1 sorties. Then we built up to 2v1, 2v2 and BVR, followed by the escalation into large force exercises with 8v8 BVR engagements’.

The largest mission of the exercise was the final one, undertaken on the afternoon of 29 July with ten Blue Force (six Typhoons and four ‘Flankers’) against ten Red Air with the objective being for the Blue Force to escort the two Hercules (one IAF, one RAF) from ‘Blueland’ into ‘Redland’ for a para-drop.

‘Whilst we are not likely to incur a 1v1 encounter with an aircraft like the Su-30 during our deployed ops to the Baltics for example, we do intercept Russian-built types and the chance for the Typhoon Force to go up against another, dissimilar high-performance aircraft was invaluable. It’s been great – you can read so much and be briefed so much on the ‘Flanker’ but it’s not until you’re up there with it that you see what it’s about. Between us, we operate two of the best dogfighters in the world, and it’s fair to say that the results have quite often come down to whoever was the best pilot on the day’. 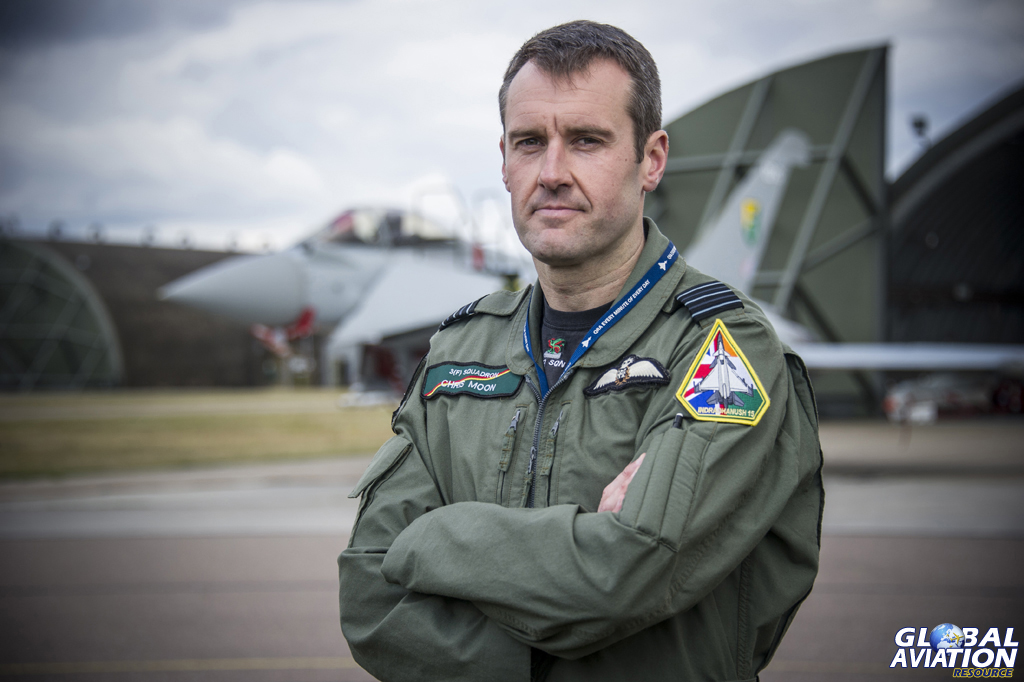 
No limitations, both fighters could deploy their full potential

Unlike the previous deployment, the IAF Su-30MKIs were permitted to use their full potential including their N011M radar, as well as the thrust vectoring control on their Lyulka AL-31FP engines. ‘We both have our strengths, the Typhoon is a ‘high-rate’ fighter and the ‘Flanker’s is a high-Alpha, slower-speed fighter’ continued Wg Cdr Moon. ‘We debrief over in the squadron and merge the tracks we fly and [are] able to read the Blue and Red Forces via RAIDS on the RAF jets and a similar system on the IAF jets, and you’ll be pleased to hear that the combined Typhoon and ‘Flanker’ package has been doing extremely well.

‘We also simulated air-to-ground mission, and we have simulated EPW2 drops as well as Paveway IVs and the Indian AF has simulated a vast variety of weapons. We have learnt that we operate in a very similar manner. You’d expect the types to have different strengths – such as two-seat versus single, and we do have subtly different weapons – but we have learnt that we can integrate together, certainly when it comes to the planning, briefing and debriefing. There were very few surprises and we achieved all of our objectives 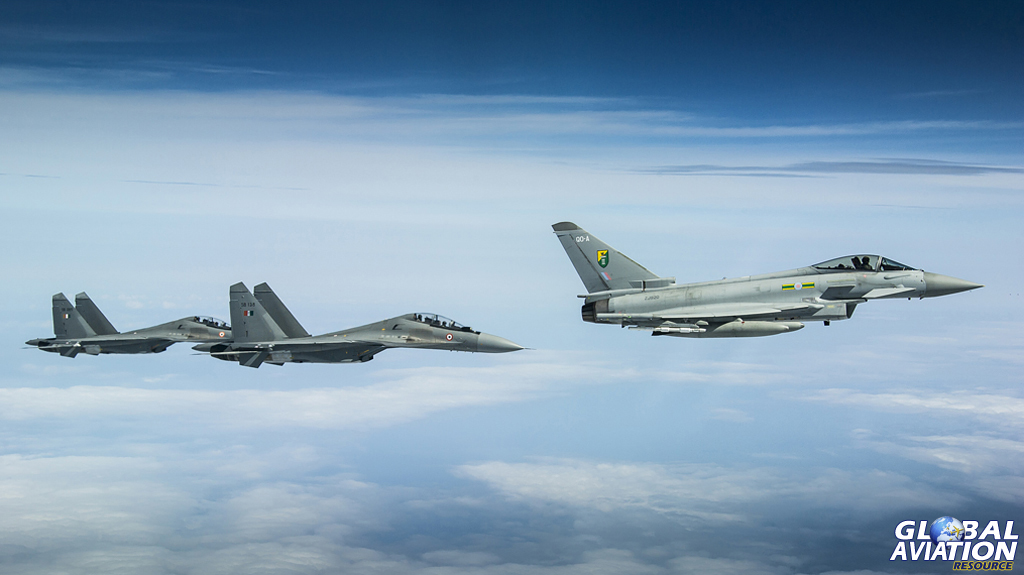 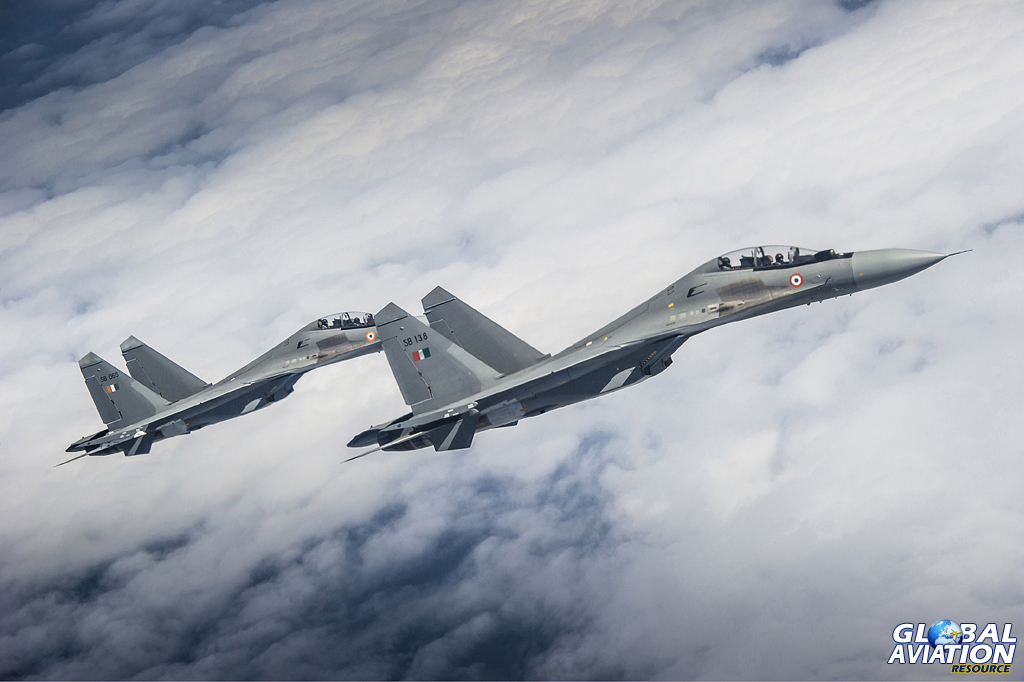 Comparison of Typhoon and Flanker as per IAF Commander


Leader of the Indian Contingent was Grp Capt Ashu Srivastav, a previous ‘Flanker’ squadron commander responsible for bringing the jets into IAF service and holding over 2,200hrs on the type. ‘Comparing the two fighters I have to be politically correct; both have got their plus and minus points, but I am going to say that the ‘Flanker’ probably has more plus points due to its super-manoeuvrability and BVR system is very good’ he said. ‘We are highly manoeuvrable in close combat and we employ the vectoring whenever we need to depending on the combat situation – generally speaking, we use it when we feel that the opponent is in a position where it cannot manoeuvre but we can, and so we can use TVC to still get the shot. We have had no restriction on IRS-T or the radar usage’. But Grp Capt Srivastav was keen to sing the Typhoon’s praises, saying ‘Typhoon is extremely good in high rates of turn and that has been great to see…’ before adding with a wry grin ‘But we have a counter for that…!’

‘Before the exercise started the RAF and IAF decided the parameters of the BVR missile launch ranges in order to operate in commonality’, Grp Capt Srivastav explained. ‘That has been the way we worked. We are here to share experience and fine-tune the way we operate, not engage in live combat, hence we used a common figure. 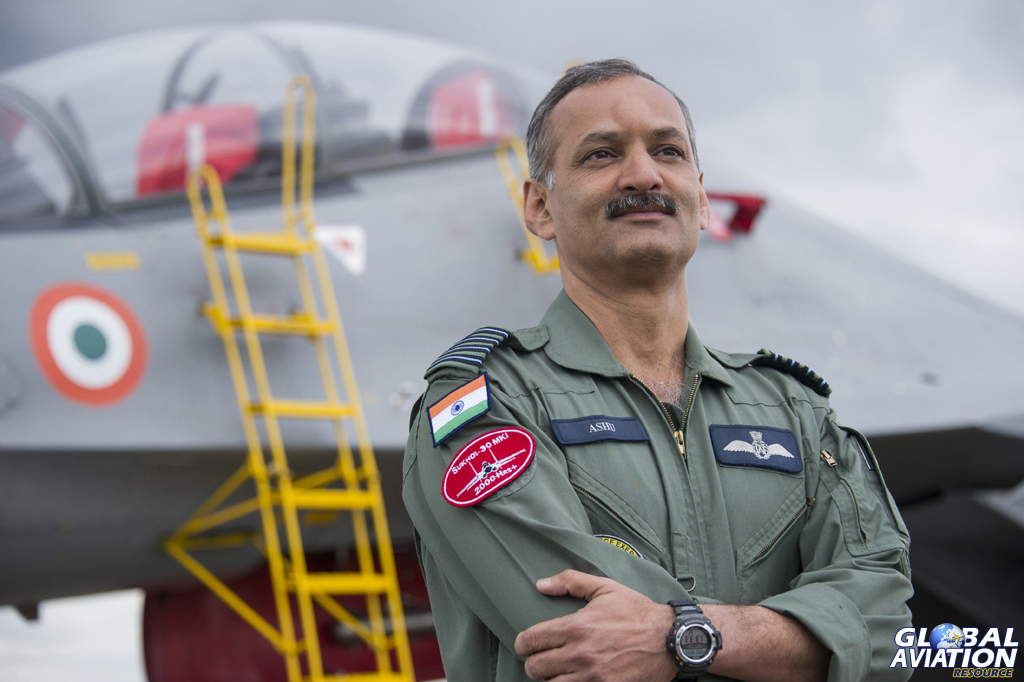 
‘Of the 190 personnel we brought over, 20 were aircrew as a mix of 15 pilots and five WSOs with a cross-section of flight experience (pilots can fly as WSO but not vice-versa), which is representative of the way we work back home. Reliability has been very good, which is why we only needed to bring four aircraft this time round and, as of late last year and after a decade of development, HAL now has a full thrust-vectoring maintenance facility so we no longer need to send them to Russia for overhaul. In terms of the future, we have an upgrade planned for a better radar (possibly Zhuk AESA) and weapons systems (potentially including full integration of the Novator KS-172 AAM and BrahMos cruise missile), and are looking forward to welcoming the RAF back to India next year.’

The value that both the IAF and the RAF put on this exercise was abundantly clear. But, no matter what the outcome of the dogfight and pitting the nimble, skilled Typhoon force against the brutish ‘Flankers’, there was one thing that was clear as summarised by Wg Cdr Moon. ‘The RAF and IAF both pride ourselves on operating some of the leading edge technical equipment in the world. However without the people to support that we are nothing so that’s where our real strength lies’. No doubt, the opportunity to foster such relationships will only become more important as time moves on.

First thing here is both sides did not have any limitations, except the BVR engagement range limit which was setup. BOth fighters seems to have used their complete potential. In previous escersice, Russians had Barred the IAF Sukhoi's from using their Radar. This time that does not seem to be the case. Either way it looks like it should be beneficial to the Russians as well as Russians can get a better understanding on how their fighters operate on comparison with the Typhoon. Considering How RAF and the Russian Aerospace Forces seems to have a habit of engaging each other time and again, this should be interesting. Though i wonder if there could have been Radar linkage between Sukhoi's and the Typhoon's.
edit on 21-7-2016 by maddy21 because: (no reason given)


Very nice effort in gathering this info and presenting it!


I'd guess the Indian pilots are much improved over their 2004 visit to Mountain Home AFB where the were soundly beaten by F15s. They should be up to speed with the Flanker's capabilities by now.


At a guess, the Flanker would hold the advantage 1 v 1 WVR with the TV, yet, the same barrier would apply in a 'furball' scenario where the Flanker would also have problems regaining energy after TV use much like the Raptor and the numbers would even out to some degree.


Lastly, I doubt all the capabilities and tactics used, as claimed.....