posted on Jun, 6 2016 @ 09:07 AM
link
a reply to: gator2001
Duterte hates America and Americans.
Duterte still hates the US
Duterte says he may cut US, Australia ties
Duterte's Hatred

When US citizens go to the consulate (Yes Cebu we live north of Cebu City) they will say you may need to "make alternative plans."

"hanging out with the wrong people"


”Jaypee Larosa (20) left his home in Lanang, a quiet residential neighborhood in Davao City, to go to a nearby Internet cafe.” (my edit) Eyewitnesses said that Jaypee Larosa had been shot by three men in dark jackets who had arrived on a motorcycle. After they shot him, one of them removed the baseball cap Larosa was wearing and said, “Son of a bitch. This is not the one,” and they immediately left the scene


A 20 year old at the internet cafe is hanging out with the wrong people?

In Cebu City Osmena has again been elected mayor. He hasn't taken office yet, but has already handed out several thousand dollars in rewards to cops who have shot suspected drug dealers. He bailed out a cop Adonis Dumpit who was convicted of killing a 17-year-old boy. And is supporting his return to duty. He was suspected of several extra judicial murders.

I didn't even bring up the fact of his Gang rape victim ‘so beautiful’ he wishes he had ‘been first’ comment.
Duterte's rape comment violates women's rights, says Philippines human rights body

As for his foreign policies they can be checked in local and regional news papers.

Our family's lives are in the PI, we don't want to leave, and we will take a huge financial hit if we have to leave. Pus family and friend's, kids school, and a life we love.
edit on 6/6/2016 by LamontCranston because: (no reason given)

That article was about the U.S. government having so much control, not about American expats.

You are combining two of my statements together. The 20 yr old had a bad thing happen to him for sure, but that is not the norm.

I would feel much more comfortable walking around Davao than Detroit or Chicago.

Strange that I am registered on the U.S. state department website for alerts, etc, but have heard nothing from them regarding leaving the Phils. Seems if a newly elected president was such a threat to U.S. citizens, they would inform us U.S. citizens.

Has the Cebu consulate told you to consider other options or is just something that has been said?

posted on Jun, 6 2016 @ 02:33 PM
link
I have been debating about doing this for time, and have decided. So don't flatter yourselves that I'm too thinned skinned or lost an argument. ATS isn't what it used to be. People don't research before they post, they don't think things through, and don't state themselves clearly.

No, what decide me was I do not want to be around people who are hypocrites (another thread), and think vigilante extra judicial murder is right and good because it makes someplace safe, secure and clean.

Also, please note I am not a left leaning liberal, I vote Libertarian or for who is the best candidate for the job. I am a supporter of the Constitution of the United States and the Bill of Rights and served 10 years in the US military (Viet Nam and a few that were as bad). I have lived in 20 different countries and always believed in my own country. Yes I live in the Philippines now and still care for my country flawed as it maybe.

And to those here in this thread who think that what happens in Davao, soon the rest of the PI, and want it to happen else where because of crime, be careful what you wish for you will probably get your wish. Also, I hope it's not someone you care about.

Duterte, while popular, also sanctioned death squads and would prevent or deter police from investigating these death squads. The death squads didn't just go after "drug dealers" but also users, street children, accused criminals, and others. All executed in cold blood in the streets without benefit of a trial. 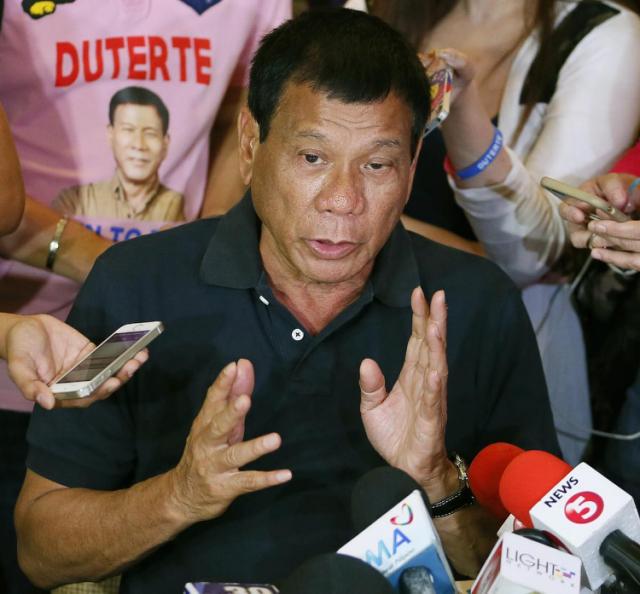 In a nationally televised speech late Saturday, Rodrigo Duterte told a huge crowd in the southern city of Davao that Filipinos who help him battle crime will be rewarded.

"Please feel free to call us, the police, or do it yourself if you have the gun — you have my support," Duterte said, warning of an extensive illegal drug trade that involves even the country's police.

If a drug dealer resists arrest or refuses to be brought to a police station and threatens a citizen with a gun or a knife, "you can kill him," Duterte said. "Shoot him and I'll give you a medal."

The 71-year-old Duterte won the May 9 presidential election on a bold promise to end crime and corruption within six months of the start of his presidency. That vow resonated among crime-weary Filipinos, though police officials considered it campaign rhetoric that was impossible to accomplish.

Well this man is definitely the definition of the Wild West. Here are some of the things he said which I found in another thread by skywatcher44

MANILA: Philippine presidential favourite Rodrigo Duterte vowed to forget human rights if he wins Monday's election and "butcher" criminals, in a typically savage tirade to end an explosive campaign. Duterte, who has hypnotised millions of voters with his promises to eradicate crime and corruption, repeatedly warned tens of thousands of fans in Manila on Saturday (May 7) night that there would be mass killings under his presidency. "Forget the laws on human rights," said Duterte, as he boasted of killing criminals during his more than two decades as mayor of the southern city of Davao. "If I make it to the presidential palace, I will do just what I did as mayor. You drug pushers, hold-up men and do-nothings, you better go out. Because as the mayor, I'd kill you."

Well this guy means business I guess. Maybe the Mayor of Chicago should take a lesson from this mans book??? I bet the solution to many drug users though would simply be to legalize all drugs.

Where does this anger come from to want to kill criminals?? Probably from years and years of having to deal with gangs and drug users accidentally and intentionally killing innocent people, oh whaddaya know just like Chicago.

I am saying it, it is time for a Fallujah style assault on parts of Chicago, the city with the largest population of gang members where criminals literally not only rule entire neighborhoods, but make up the entire population. More than the FARC of Colombia and een more members tha Hezbollah, and all concentrated in one metropolis with some of the strictest gun control in the country.


I honesty cannot disagree with ANY of that.

posted on Jun, 7 2016 @ 12:14 AM
link
I've been to lots of the Phillipines as my fiance is from there and I'm a little weary of going back there if there is indeed roaming death squads even if their intentions are good.
I definitely disagree with the methods but I did witness that changes need to be made. Beautiful place and awsome people and I love the spirit of bayanihan just without the death squads!

The enemy which number over 50,000 in a single city alone (a conservative figure) are already employing these tactics on innocent people who interfere with criminal commerce or try and testify as witnesses. It is time to fight fire with fire. Arrest as many as will allow themselves to, scrub all gang affiliated ink from their bodies, split them up in prisons all around the country. Would likely have to build at least 20 more to fit them all in, perhaps it would be easier to utilize firing squads.

Is it time to treat crime as a life or death decision?? When it effects entire cities, I say why not?? The innocent already die EVERY SINGLE DAY! Lets start making some public examples of the leadership whos orders terrorize the lives of millions in urban centers across the nation with drug trafficking, turf wars, human trafficking, kidnapping, armed robberies, and targeted killings. Every addict they create is another string of violent crimes and theft.

Crime will soon become a life or death decision . It will be easier when we deploy the machines.

What you advocate, at least in the USA, is fighting the SYMPTOM. You're not addressing the cause: Illegal Drugs.

Legalize certain drugs and you will be addressing the cause and reducing the symptoms. (And no, I don't use drugs.) At some point the killing has to stop. It can't stop when drugs and drug turf wars are the major cause of the violence. And it can't stop when we have created a culture of illegal guns and rarely any enforcement to get the illegal guns off the streets.

Oh and use the tax dollars gained by sale of LEGAL drugs to finance the education and reform of those neighborhoods which were destroyed by "the enemy" as you call them.

No, legalizing drugs is not an option. The only thing that needs to be re-scheduled is marijuana. All the other ones lead more often to criminal behavior in order to get the money to buy the drugs.
In lands where theft is punshiable by cutting off the hand, theft still happens. It just so happens significantly less than a Western society that simply says "please, don't do it again" after a dozen thefts.

Kill the drug dealers that destroy entire communities, and there will still be drug dealers. But there will be many less, and with mitigated influence on the community, if they make it down the block before a good Samaritan does the tax payer some favors.

The former President Uribe of Colombia took a similar stance against paramilitary rebel groups. Their influence and numbers fell dramatically, as well as their capabilities to inflict attacks against the government, mainly due to many of them having been killed.

I get that a LOT of people in America have friends and/or relatives who sell drugs, and it is usually these people who want to see drugs legalized across the board. Its emotional, they do not want to see harm befall those close to them who participate in crime and the destruction of peoples lives.

I known many people in my time who have sold very bad things. Never once though, did I ever believe legalizing such junk was an option. I plead with a few to just stop before they ended up in prison. Some are dead. Others deserve to be dead.

Chicago needs a serious effort to eradicate the gang problems which are responsible for the bulk of the cities violence, much of which stems from the drug trade. Off with their heads!