Man in Florida caught Triangular Craft over the Highway

one of the most recent footage uploaded by a youtuber and which seems genuine. there are two channels that uploaded the vid, the one is the man who shot the video. the link to the original uploader is also provided in the description of the below vid by secureteam.

the person who shot the video while driving down the highway also speculates that the craft could be a saucer with lights in triangular layout. there are also a couple of other interesting examples towards the end of the secureteam vid.

They are indeed, but I think it's quite a good video of lights flashing.

Look, some fuzzy dots, bad acting, someone driving around who just happens to be using their smartphone running a video camera app, cruddy soundtrack and a 'Tube channel that seems to release far too many of these type videos.

posted on May, 22 2016 @ 12:59 AM
link
Uploaded by "a youtuber" who very definitely obviously has no connection to the person who created this ATS thread. Obviously. Why would you suggest otherwise?


elliotmtl, i found that video interesting and also stated that i have my grain of salt ready. does that necessarily mean i am connected to some youtube channel, what kind of an accusation is that? just because i shared a yt vid you're falsely accusing me of spamming, now sorry dude, but that's plain evil.
edit on 22-5-2016 by jamsession because: "a reply to:" line

originally posted by: AdmireTheDistance
That video seems fake as hell, the dude's acting is awful, and secureteam are known hoaxers and liars.

well, i also stated that i took it with a grain of salt and that it "seemed" kinda legit, but never would think of it as a hoax of such grand scale. i always thought that videos published on youtube channels run by people who are known as obvious hoaxers wouldn't have that much likes versus few dislikes. the first thing i look in a video is the likes versus dislikes count, or if the likes and comments are disabled or not to decide whether i should give it some chance and credit. the original owner of the vid also has 67 likes and counting versus 1 dislike. this got me fooled i guess. thanks anyway, now i see that this can be misleading and i have to re-review my credibility criteria :d
edit on 22-5-2016 by jamsession because: (no reason given)

phage, noooo, not you please. please read my above post.

I did. That's the reason for the accolade.
Learning is applause worthy.

Secureteam Pat and Luke made millions by scamming viewers with Cinema 4d and Adobe after effects!
edit on 22-5-2016 by mekhanics because: (no reason given)

thanks, i had to learn this the hard way. i've reported the said vid on youtube, but i don't think yt would move a finger for any action. they too make big cash from viewer clicks after all.

originally posted by: AdmireTheDistance
That video seems fake as hell, the dude's acting is awful, and secureteam are known hoaxers and liars.

So the fact that secureteam took this guy's video and put it on their site somehow makes the original video a "hoax"?

Seems a bit irrational to me.

You can see that this video was originally posted on the YouTube channel of Brandon MacEachern.

If you look in the comments section of the original video, you find this exchange: 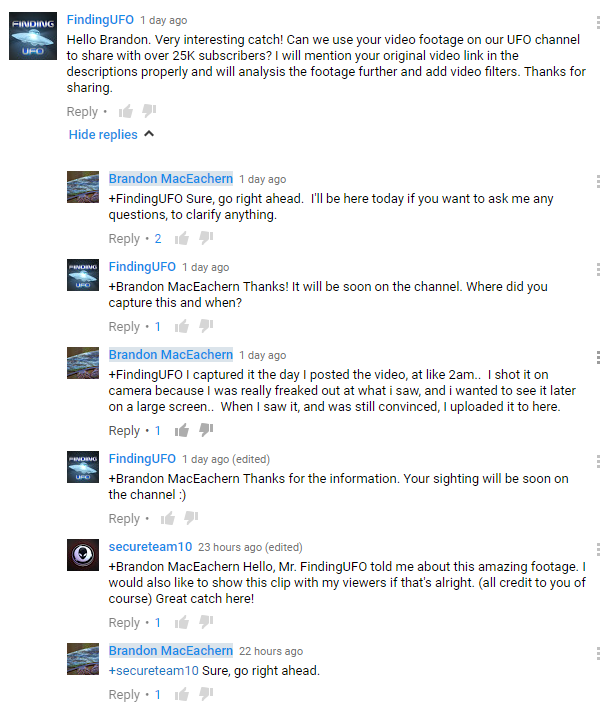 Ok so I normally would not post anything like this because while I generally believe we are not alone, I'm not big on sighting videos, because it could be anything. Well, here's what I didn't say on the video. I was driving on route 46 (I said 426 in the video, as I read the GPS wrong), and saw some weird looking lights on the left side of the road. I thought it was just a plane with a weird light pattern. Well, when it crossed the road, and got bigger, I got a little more curious.. Then I saw it's lights flashing, and move across the road, and then hover on the right side. As you can see, after turning on the camera, it didn't last before it disappeared. I have weighed in if it was a plane or helicopter. Well, it can't be a plane, it hovered on the right side. It can't be a helicopter, it was too large, and round like. I'm not really sure what I saw. It really looked like a flying saucer, but I'm going to call this video that it was a UFO, because it is unidentified to me, and it is a flying object.

There's nothing on the man's YouTube channel to indicate the witness has any interest in UFOs at all.

His reaction and the video itself seem genuine enough for me. At least I noticed nothing that would indicate a hoax.

I don't know what to think about this knee-jerk reaction that we consistently see on ATS regarding videos that are reposted by "known hoaxers" but in no way originate with them.

We don't judge evidence on its own merits anymore?

Sounds like the opposite of denying ignorance quite frankly.