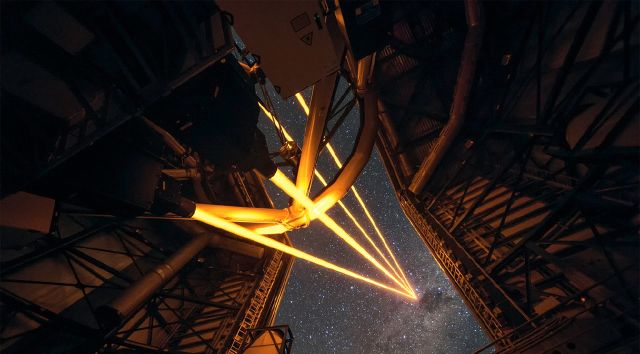 Imagine if we sent up a visible signal that could eventually be seen across the entire universe. Imagine if another civilization did the same. Photonics advances allow us to be seen across the universe, with major implications for the search for extraterrestrial intelligence, says UC Santa Barbara physicist Philip Lubin. “But suppose there is a civilization like ours and suppose — unlike us, who are skittish about broadcasting our presence — they think it’s important to be a beacon, an interstellar or extragalactic lighthouse of sorts,” he added. “There is a photonics revolution going on on Earth that enables this specific kind of transmission of information via visible or near-infrared light of high intensity."


The same directed energy technology is at the core of Lubin’s recent efforts to develop miniscule, laser-powered interstellar spacecraft. That work, funded since 2015 by NASA (and just selected by the space agency for “Phase II” support) is the technology behind billionaire Yuri Milner’s newsmaking, $100-million Breakthrough Starshot initiative announced April 12. Lubin is a scientific advisor on Starshot, which is using his NASA research as a roadmap as it seeks to send tiny spacecraft to nearby star systems. In describing directed energy, Lubin likened the process to using the force of water from a garden hose to push a ball forward. Using a laser light, spacecraft can be pushed and steered in much the same way. Applied to SETI, he said, the directed energy system could be deployed to send a targeted signal to other planetary systems. “In our paper, we propose a search strategy that will observe nearly 100 billion planets, allowing us to test our hypothesis that other similarly or more advanced civilizations with this same broadcast capability exist,” Lubin said.


Looking up at the night sky — expansive and seemingly endless, stars and constellations blinking and glimmering like jewels just out of reach — it’s impossible not to wonder: Are we alone? For many of us, the notion of intelligent life on other planets is as captivating as ideas come. Maybe in some other star system, maybe a billion light years away, there’s a civilization like ours asking the exact same question. The technology now exists to enable exactly that scenario, according to Lubin, whose new work applies his research and advances in directed-energy systems to the search for extraterrestrial intelligence (SETI). His recent paper “The Search for Directed Intelligence” appears in the journal REACH – Reviews in Human Space Exploration.

We propose a search for sources of directed energy systems such as those now becoming technologically feasible on Earth. Recent advances in our own abilities allow us to foresee our own capability that will radically changes our ability to broadcast our presence. We show that systems of this type have the ability to be detected at vast distances and indeed can be detected across the entire horizon. This profoundly changes the possibilities for searches for extra-terrestrial technology advanced civilizations. We show that even modest searches can be extremely effective at detecting or limiting many civilization classes. We propose a search strategy that will observe more than 1012 stellar and planetary systems with possible extensions to more than 1020 systems allowing us to test the hypothesis that other similarly or more advanced civilization with this same capability, and are broadcasting, exist.

Like the Bat Symbol from Batman, only re-vamped for projection into outer space and something for the purpose of signaling aliens instead of a vigilante ninja

Sounds cool, but what if we get the attention of hostiles?

Maybe we need some forcing to do our Human stuff in a nicer way ?

What this article is suggesting is...frankly bizarre to me.

Sending data over a distance with a laser is a great idea, for things that are fairly local to us. But a laser beam will be wider at its target, than at its origin point. Over relatively small distances, this causes no problem what so ever, but I fail entirely to believe that a laser has been developed which is capable of keeping a beam so tight, as to be able to send a clear transmission of data from one star system to another.

To beam light toward a target object in another solar system would be like shining a flashlight at a ping pong ball from ten feet. The beam would be wider than the object! Even laser beams widen over distance, after all! So unless someone the other end of this galactic phone call is aware that transmission is imminent, the chances are that they would have to have very broad receiving arrays in order to be able to record the transmission, and that leaves alone any linguistic, conceptual, or sensatory barriers that might be encountered during any effort to translate that data.

Unless the people behind this are suggesting that they have a laser which has the ability remain of a totally constant width, the whole length of its passage through the cosmos (buuuuuuuuullllllsnip) I fail to see what the point would be of sending anything.

You're right in that a laser beam shone from Earth will be incredibly large if it reached another system. But at the same time, the receiver doesn't need the whole of the beam to receive information from it; the received light only needs to be strong enough to actually be registered.

Case in point, laser ranging experiments using mirrors on the Moon. By the time a laser beam gets to the Moon and back, it's quite wide in crosssection. But all we need is some of that light reflected back into a detector.

Interstellar laser communication would require immense energy in order to create light of enough intensity. Perhaps involving lasers pumped by nuclear reactions or even antimatter, when we get to using it.

But laser ranging is only about reflection and distance.

We are talking about retaining actual fidelity over interstellar distances. Leaving aside all the data loss from particles of dust and assorted diffusing elements between origin and target, you would still have to figure out how to compress the data well enough that just the smallest possible signal registering, would be enough for the recipient to get all of the data that was sent, and in a readable format too...it's beyond imagining!

Hell, it would make more sense to say that we were going to quantum entangle our entire Sun with their star, and send morse code by flicking our Sun on and off in sequence. It's bonkers, but only as bonkers as trying to get laser light to carry a message across the expanse between stars!
edit on 18-5-2016 by TrueBrit because: Grammatical improvement

Another problem over longer distances is that when space expands the laser will diffuse, no matter how intense or how well it is focused at the target, the focusing will not outrun spatial expansion.

posted on May, 19 2016 @ 05:25 PM
link
a reply to: TrueBrit
If the message is in binary, then you only need to register "light on" and "light off" sequence. Even if it's just a handful of photons reaching the detector.