A software program called UNU harnessed the collective power of horse racing experts to correctly predict which four horses would cross the finish line — and in which order — at this weekend’s Kentucky Derby.

And that’s exactly what Tech Insider reporter Hope Reese did.

It’s was her idea for UNU to make the call. She knew that the platform, developed by Unanimous A.I., a Silicon Valley startup founded by entrepreneur and researcher Louis Rosenberg, had made some correct predictions in the past.

With a company name ending in "A.I." and talk of "swarm intelligence," you could be forgiven for thinking this was going to be about something cutting edge involving rat neurons on a chip... but you would be wrong. In fact, the tech is probably the least significant part of this story.

Essentially what they did was to select a group of 20 horse racing experts and ask them a brief series of questions, the answers to which were then used to narrow a list of 20 contenders down to 4 horses. After that, the experts were asked to rank the 4 horses in the order in which they would finish.

In other words, the software doesn't sound all that complex and what they're doing is harnessing good ole fashion collective decision making, something people have been doing as long as there have been people. Where their methodology differs from something like..oh I dunno, Congress, which seems to never get anything right is that each person involved is akin to a node in a neural net. That is, they don't get together, debate the issue and vote (or spend inordinate time concerning themselves with getting re-elected) — the interaction of the individual nodes is restricted to feeding back information from previous consensus decisions into subsequent iterations. While I think "Swarm A.I." is a (deliberate) misnomer, software like this does open a door to better ways of making better decisions and the results are hard to argue:

And here’s the amazing thing — while the Swarm A.I. got the picks perfect, not a single individual who participated in the swarm got the picks right on their own — not one.”

As the article noted, this wasn't the first success for Unanimous A.I. either:

In fact, the tool had accurately guessed winners for the Super Bowl, the NCAA championships, the Oscars, and also correctly predicted primary election results. 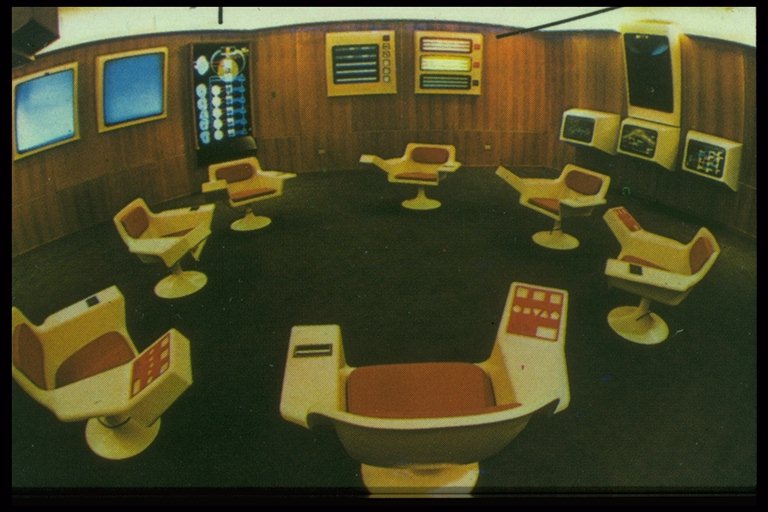 Project Cybersyn was a Chilean project from 1971–1973 during the presidency of Salvador Allende aimed at constructing a distributed decision support system to aid in the management of the national economy. The project consisted of four modules: an economic simulator, custom software to check factory performance, an operations room, and a national network of telex machines that were linked to one mainframe computer.[2] Project

Cybersyn was based on viable system model theory and a neural network approach to organizational design, and featured innovative technology for its time: it included a network of telex machines (Cybernet) in state-run enterprises that would transmit and receive information with the government in Santiago. Information from the field would be fed into statistical modeling software (Cyberstride) that would monitor production indicators (such as raw material supplies or high rates of worker absenteeism) in real time, and alert the workers in the first case, and in abnormal situations also the central government, if those parameters fell outside acceptable ranges. The information would also be input into economic simulation software (CHECO, for CHilean ECOnomic simulator) that the government could use to forecast the possible outcome of economic decisions. Finally, a sophisticated operations room (Opsroom) would provide a space where managers could see relevant economic data, formulate responses to emergencies, and transmit advice and directives to enterprises and factories in alarm situations by using the telex network.

The principal architect of the system was British operations research scientist Stafford Beer, and the system embodied his notions of organisational cybernetics in industrial management. One of its main objectives was to devolve decision-making power within industrial enterprises to their workforce in order to develop self-regulation of factories.

Is sports betting about to get a whole hell of a lot less interesting?


Depending on how consistently accurate it is, sports betting may go extinct.

posted on May, 14 2016 @ 06:41 AM
link
This is very interesting stuff for a number of reasons. However I highly doubt it would be accurate enough to make any betting agencies worried about it. Even if you know the entire race history of all the horses, your bets wont be perfect. Many people have actually written software which examines the entire race history of the horses in a race and use that to predict the outcome of future races. The same thing is done by currency traders, they examine historical price data to predict future prices. But horse betting and currency trading still exists, so clearly knowing what happened in the past doesn't always let you know what will happen in the future, although having access to the historical data can increase your chances of making a correct prediction. The real question is, does having access to historical data provide the same advantage as having access to a group of experts? Presumably, those people are experts because they've seen so many horse races and studied the history of all the horses very closely. At first glance they would seem to be equivalent but I have a feeling it's not that simple, I suspect that using a committee of experts does have an advantage, but a single expert would give no advantage.
edit on 14/5/2016 by ChaoticOrder because: (no reason given)

posted on May, 14 2016 @ 08:52 AM
link
I was just doing some research on swarm intelligence and came across the funniest video. It's a video showing UNU in action (the same system that picked the superfecta). It was released about 9 months ago, it's titled "Swarm Intelligence predicts Trump's odds of becoming President":

9 months ago I probably would have assigned an extremely low probability to Trump winning as well, so it's understandable the swarm intelligence would get the answer so wrong. What that video demonstrates is that group consensus doesn't always provide the correct answer and can provide a very wrong answer, because common assumptions can be wrong and the future is never entirely certain.
edit on 14/5/2016 by ChaoticOrder because: (no reason given)