posted on May, 12 2016 @ 05:02 PM
link
I was pleased to discover an email as I checked my inbox this morning, an email informing me that Final Fantasy X and Final Fantasy X-2 were now available on PC!

Final Fantasy X was the first Final Fantasy I ever played and, probably due to my "first time bias", it remains my favourite of the Final Fantasy franchise. As such, the moment my blurred eyes made sense of the email, I proceeded to purchase it straight away and it's currently downloading on Steam! Woo!

For those who may not have played this absolutely beautiful game:
It is the story of Tidus, a sportsman following in the footsteps of his famous, though abusive, father. During one of his games, his world is turned upside down, his life is turned upside down! He suddenly finds himself a significant amount of years in the future, all he has known is in ruins except for his beloved sport. As you play through his search for answers, a story of love and loss, life and death, -hope-, is brought to life before your eyes.

Or you could just spend hours playing Blitzball, the world-wide sport that brings everyone together... forget the amazing story!
(I admit it, I was one of the people who actually wanted a stand-alone version of Blitzball, the mini-game inside the main-game! Just terrible.)

I had no idea that this was being released on PC today. I had an inkling that it would -eventually-, considering almost every other Final Fantasy in existence is finally available for computer gaming. But they seemed to be taking their time with this particular installment.

Just happy that it's now finally available! Is anyone else here a Final Fantasy fan? 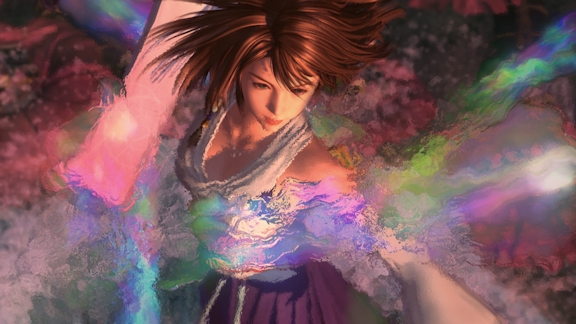 It almost saddens me that there are no replies to this thread.

I too am a pretty huge fan of the series although X and X-2 are pretty much the last ones I've played through and they are my favorites.

The only complaint I ever had about FFX was blitz ball. Particularly the part where you're forced to play the tournament.
Other then that it's a great game, great story and it will be some good retro fun.

Anyway, I just felt I had to respond.
Thanks to you I purchased this upon reading of it's release in this thread.
I'm only just now beginning to download it.

In 3.5 more hours me and Tidus will be hacking our way through Spira just like in the old days. Can't wait!
Thanks for posting this.

You're welcome!
I'm glad that I've helped someone reacquaint themselves with Tidus and Yuna and everyone in-between. (I personally love Auron and Lulu.)

While I can spend hours and hours playing Blitzball (and did last night haha, Besaid Aurochs! #1 in Tidus' first Tournament! Smoke on -that-, Luca Goers!) I also hate that forced match. I usually just throw it because I can't be bothered and want to get on with the story. Plus, Tidus gets booed out whether you're winning or losing, poor kid.

Thank you for responding and I hope you enjoy yourself in Spira!

posted on May, 21 2016 @ 10:24 AM
link
I love FFX so much. The 'To Zanarkand' song is the best piece of music in any game in my opinion – it's utterly spell-binding; "Listen to my story. This may be our last chance". The characters and storyline are epic (but don't mention Tidus' laugh), the CGI sequences are amazing, the combat was good and I liked how you could control your summons. Character progression was deep too – you could grind for hours to make your characters super powerful and bypass the 9,999 damage-limit, which was fun. I spent hours obsessively seeking all the characters final weapons, experimenting with different set-ups and then trying to beat the monsters in the arena and the Dark aeons. Blitzball was awesome too, and that ending. So sad. Yojimbo's Zanmato cheapened the game in my opinion though. The only real gripe with FFX was there was no world-map and for that reason it felt a lot more linear than the previous games. Since FFXII the games have been going downhill. My personal favorites remain FFVII, FFX and FFVIII.

Yes! The music in this game is absolutely beautiful. I don't often listen to game soundtracks, but I find myself listening to this one every now and again just for some beautiful background music when writing or drawing. It's just lovely.

I cringe every time I play and Tidus does that laugh. *shudder*

FFX was the first one that I played, and then I went backwards and tried the ones before X. I haven't dared to touch the ones after though, have heard so many disheartening things. I did give the MMO a go, but was playing with someone who already had played and they were just dragging me through everything and I didn't know what was going on. Will need to try it again by myself one of these days.


I haven't dared to touch the ones after though, have heard so many disheartening things.

i think youre probably right about that,though 12 is good.