Love for the Confederate Flag, In Brazil???

page: 1
24
<<   2  3 >>
log in
join
share:
AmericanRealist
+9 more
posted on Apr, 23 2016 @ 11:27 AM
link
So the small town of SANTA BARBARA D’OESTE, Brazil apparently has a rich history of confederate culture. Yea thats right, Souther USA Confederate love. So after the civil war there were some citizens that served who immigrated to Brazil, and now that town has memorials and festivals that honor and cherish Confederate history, and I say good for them. They attach no racist connotations to this symbol, unlike the communist American hating left that takes a page from authoritarian history to attempt to stigmatize anyone who wants to show their pride and try to purge anything related from history and existence. 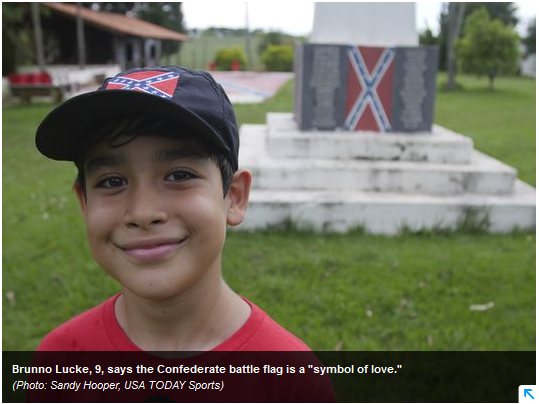 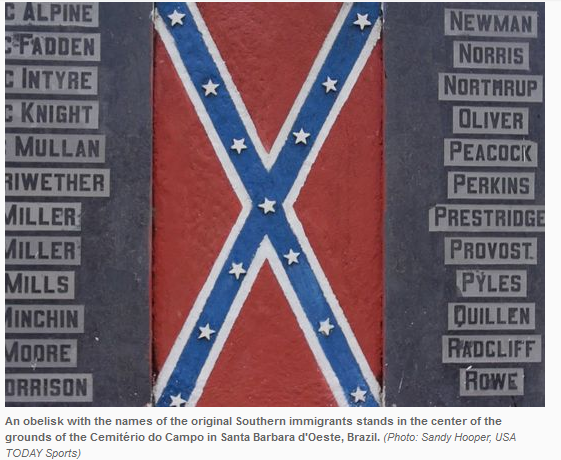 SANTA BARBARA D’OESTE, Brazil – Brunno Lucke is a 9-year-old boy with a sweet smile, a love of soccer and his own YouTube channel. He also wears a cap with the Confederate battle flag emblazoned on its peak.

This city of more than 180,000, an hour’s flight from Rio de Janeiro, site of this summer's Olympics, is perhaps the last place you’d expect to find the most controversial symbol in American history. It adorns everything from belt buckles to bumper stickers among the Fraternidade Descendência Americana, an organization that celebrates the emigration of a group of defeated Southerners to Brazil after the Civil War 150 years ago.

Yet in Santa Barbara D’Oeste there is no negative association with the flag that many Americans see as a symbol of slavery and segregation.

“To me,” Bruno says, already dreaming of the hot dogs he’ll soon consume at a popular annual Confederate festival, “the flag is a symbol of love.”

The festival will be held Sunday in a peaceful patch of leafy greenery next to a small chapel and near a graveyard where settlers and their descendants – Confederados as they are known here – have been buried for generations.

More than 2,000 people are expected to attend and organizers have measures to ensure the vibe stays family friendly. Security guards will check for any sign of white supremacist images or tattoos.

Brazil's has 14 million black citizens (7.6% of the population) and they will be represented too.

“Of course (black people) are welcomed,” Brunno’s mother, Kareline Townsend Lucke, says through a translator. “Welcomed in the best way possible like everyone, without any distinction. We’re not racist.”

During discussions with several Confederados, who meet here regularly, there is no evidence of racism. Instead they are proud of their culture, and Confederate memories are regarded as an appreciation of lineage, not a historical blight.

So for all the America hating communist Soros funded hate groups, please remove the sticks from your rears and show some respect for some nice cultural history, which is also loved around the world.
edit on 4/23/2016 by AmericanRealist because: adding video.

originally posted by: AmericanRealist
, unlike the communist American hating left that takes a page from authoritarian history to attempt to stand try to purge anything related from history and existence.

You could have just left this as a story of a quaint little town that has a surprising tie to US History. But you couldn't. I stopped reading after that sentence. You hijacked your own thread.

Oh so if we don't agree with the flag we are American hating commies? I don't care if you want to fly it, just get it off gov buildings. Oh and that isn't erasing it from history, even statues ans street names going isn't. It isn't erased until it is out of the books.
Oh and a small town does not speak for all of Brazil.

It is a beautiful flag that represented some brave men who fought against tyranny. That is what it means to me. Anything else others think about it is THEIR problem.

This kid has more sense than the entire PC crowd.

Oh so if we don't agree with the flag we are American hating commies? I don't care if you want to fly it, just get it off gov buildings. Oh and that isn't erasing it from history, even statues ans street names going isn't. It isn't erased until it is out of the books.

Books is the last step, and it is already being attempted.

You can disagree with it ally you want without being an America hating communist.

to stigmatize anyone who wants to show their pride and try to purge anything related from history and existence.

That is what would make someone an America hating communist.

The reason they are taking so much offense to the 'American Hating Communist' moniker is because deep down they know it is describing them. There is no other reason to protest so much nor to try to re-write history to their specification.

Where is it being attempted to take the civil war and the confederacy out of our books?

I find it ironic that you want to say that any one that attaches a stigma to it must be a commie, a rather large generalization but don't want anyone to largely generalize people who like the flag...

I couldn't care less what he or anyone thinks about me. It was about how he hates the idea of calling everyone who likes the flag racist, but has no problem calling people who want to see it gone commies.

Do you really not see an issue there?

People think I am being sarcastic or stupid, but Communism really is trying to subtly infiltrate America again. It is being disguised of course as "socialism" , it just comes with a side of the media and Soros funded terrorists making games of attacking people and property for disagreeing with their views, and making sure to attack peoples character when opinions do not meet and agree.

Stick to the OP topic.

Talking about each other is OFF TOPIC.

Any more of that and the posts will be removed, and post bans handed out.

Stop talking about each other. There will be no further warnings!

Well I did not call you or Reldra commies either though. That would only fit if you go around doing character assassination of people like myself and Metaliccus, demanding revisions to history and seeing the Historical symbol abolished from public view.

Now if that just happens to be what you support, than the title probably fits. I really do not see why it should be removed from public buildings at all. 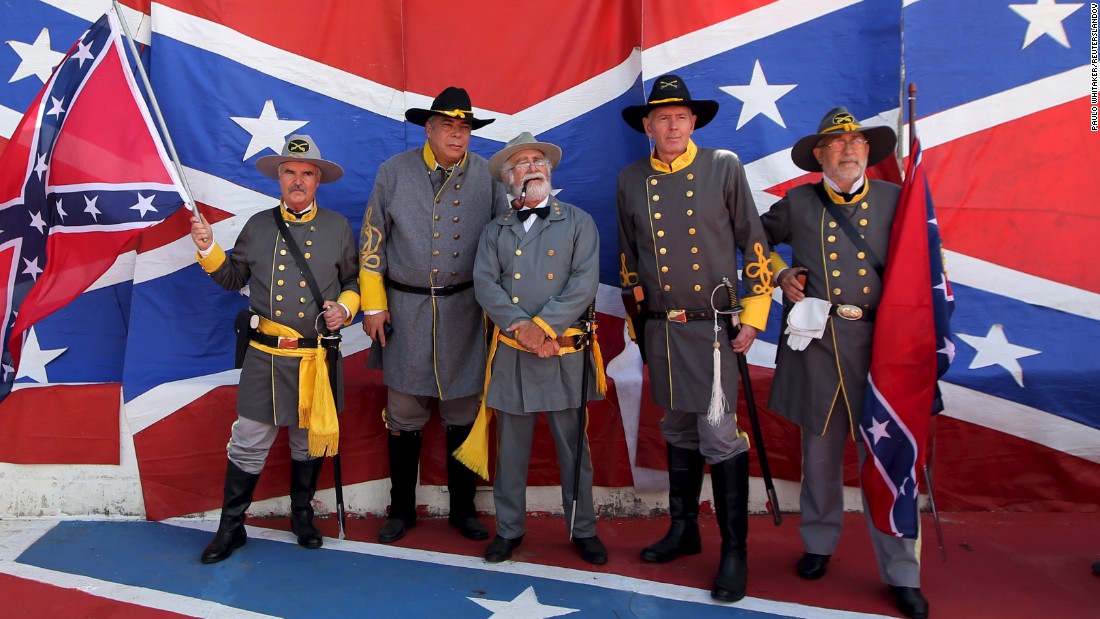 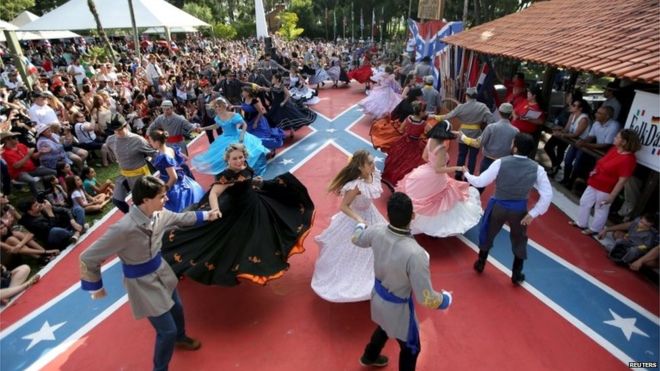 What history is being revisioned when people want the flag off public buildings?
And why is it OK to attach a stigma to those people but thete can be no stigma attached to the people that support the flag with out it? Isn't that being just as PC as the people who don't support the flag?

Very festive. I know for sure they are indulging in some exquisite cuisine. I just hope they have Turkey legs and battered corn and some BBQ to make it truly Southern.

You could have just left this as a story of a quaint little town that has a surprising tie to US History.

Huh? I though that the OP did that. I'm glad this was posted as I was unaware of the South American ties, but was well aware of the strong ties the Confederacy had with England.


They attach no racist connotations to this symbol, unlike the communist American hating left that takes a page from authoritarian history to attempt to stigmatize anyone who wants to show their pride and try to purge anything related from history and existence.


But you couldn't. I stopped reading after that sentence. You hijacked your own thread.


I think that's a bit harsh considering it does ring true. When the Confederate flag issue had it's 15 minutes of fame it almost became a witch hunt. It wasn't just about removing them from public buildings. I seem to recall some retail blacklisting of that flag. It seems a certain group of people would like society to shun that flag, because of what they think it represents. That's not just removing it from public buildings anymore, that's trying to steer public perception of the flag through the use of propaganda and peer pressure.

OP didn't hijack anything, he merely was exposing the truth.

Star & flag OP, thanks for sharing with ATS.

posted on Apr, 23 2016 @ 01:09 PM
link
See this is why people on the right are called loons, because if one does not find any beauty in an oppressive flag, people must be communist.

The confederate flag was used and is still used to promote hatred, not by everyone but by enough people that when we see the flag it leaves a bad taste in your mouth.

So from this canadian commie, grow a pair and stop calling everyone commies, it's not the 1950s.

Wonder if those confederates went to Brazil after the war because they still had slavery there.... All about 'love' I guess.


Wonder if those confederates went to Brazil after the war because they still had slavery there.... All about 'love' I guess.

Quite the generalization you made there. So we must assume everyone living south of the Mason-Dixon line in the 1860's was a slavery loving racist?

Ugh. Can't we just accept that they brought their heritage with them like any culture does when it immigrates? Did their culture have some skeletons in the closet? You bet it did, but then again most cultures do have eras in their past that they'd rather forget.