The Grendels of Gilf Kebir 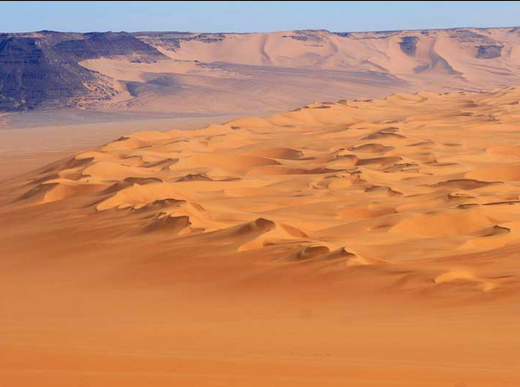 Please stay together at all times! We’re in the middle of thousands of square miles of rocky plateaus and 200 foot high dunes. Cairo is 900km to the North East so step lively!

We’re about to enter the ancient shelter so watch where you tread and don’t bump your heads. Inside, you’ll find shade from the sun and the artwork of the people who used to come here for the same reasons - shelter. In their day, this desert was in its infancy and their ancestors might have sighed, ‘I remember when all this was fields.’

The caves are spread out across the wastes of Gilf Kebir and many more lie lost beneath the dunes. Who knows what artworks and treasures are preserved or what surprises await us in the future? The sun itself has risen millions of times since their creation – a mute witness to the follies and wins of humanity.

There are hundreds of handprints throughout the cave and they come in different sizes from children to adults. We see these markers in caves across Africa and into Europe and believe they’re created by spitting and blowing pigments against hands held to the rock. If you look more carefully, some of the hand prints are too small to have been people-hands and some experts think they used the feet of lizards. 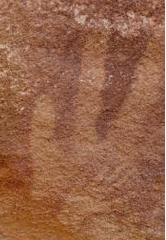 As we go a little deeper, the hand-prints lose their prominence and we see hundreds of human figures. Notice how athletic these people were; they have powerful thighs and broad shoulders – heroic proportions. No sitting around watching corn grow! The people here were hunters and fighters; born and bred to withstand hardships and do battle. Like a Bayeux Tapestry, some scenes memorialise conflicts. 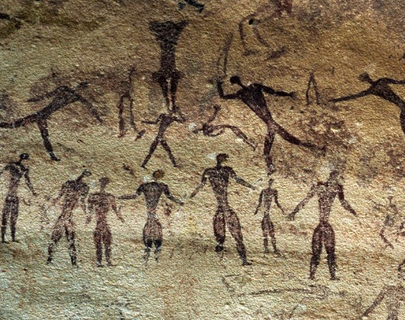 Most are standing and active and others are horizontal. Why might this be? What inspired these artists to portray people like that? Are they depicting deaths, plagues or diseases? Some say swimming and that’s another topic for the future. Or perhaps they represent a spiritual, abstract symbolism of souls flying. We don’t know the answers.

What was happening here? Tribal conflicts? Power struggles? There’s a man with possibly a hand-axe raised in his right hand whilst ten figures have their arms raised above. Isn’t that a universal sign for surrender and submission? 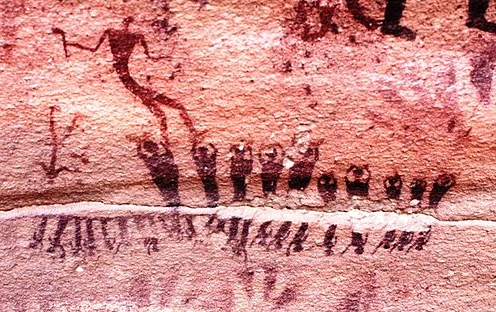 Notice how the fault in the rock is used as a reflection - some artistic intent there. Beneath this crack are more figures inverted like a reflection in water or maybe representing people in an afterlife.

Across these tableaux are a small variety of regional animals like giraffes and what look like gazelles. Forget about those for now because, by far, the most interesting images inspired the place-name for where we are – The Cave of Beasts.

Further on, we see something more mysterious... 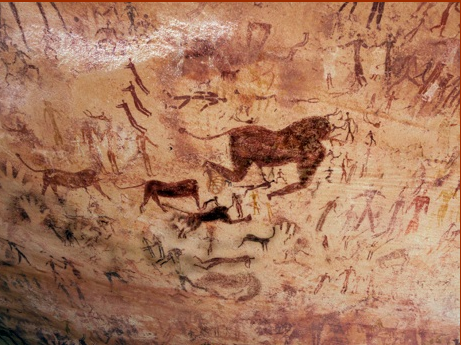 These creatures have been controversial to the extent that nobody quite knows what the heck they are and some ideas have been very creative and thought out.. The artists were able enough to capture recognisable giraffes and gazelles; the people are clearly people. Some of you aren’t strangers to the charcoals or sketch pads and will appreciate that these creatures were intentional: 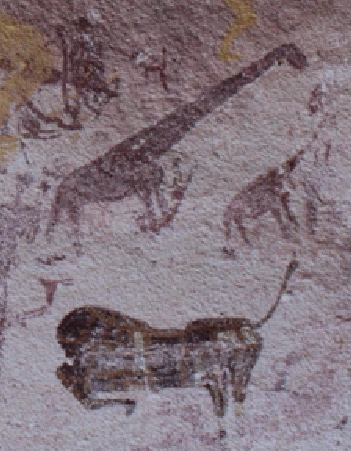 So what animal were they trying to draw here? Why could they draw the legs of animals and people and then, apparently, fail so badly here? Where is its head? Is it fair to say the artist knew what they were doing? I think so.

What I think you are looking at is one of the earliest examples of monsters in art. Yes folks, our long-dead artists were riffing on the same chords as more modern illustrators and writers and had their own version of Grendel. We see the beasts running amok whilst people appear to be fighting for their lives. It’s possibly the narrative of a localised mythology that died all those years ago. They might even be their equivalent of demons or nature spirits.

One depiction suggests these monsters could be caught in nets and calls to mind the idea of the archetypal Hero taming a mythical Minotaur. Look at the effort that went into the detailed ‘net.’ 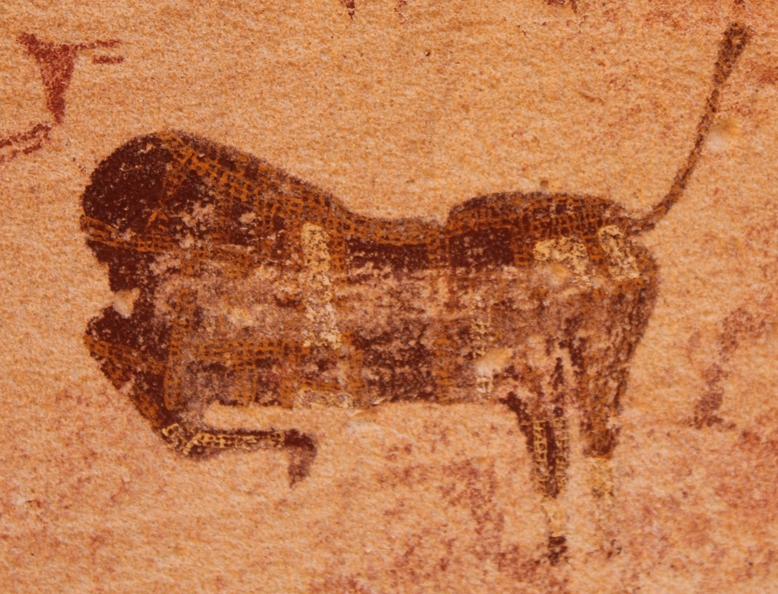 Of course, these creatures remain controversial because the explanations aren’t clear enough to be conclusive. Let’s move along and look at this other picture. Notice how the golden detailing looks more like the decorative bands worn by chieftains or gods. If any doubt existed that these were simply animals, the symbols of wealth and power suggest otherwise. 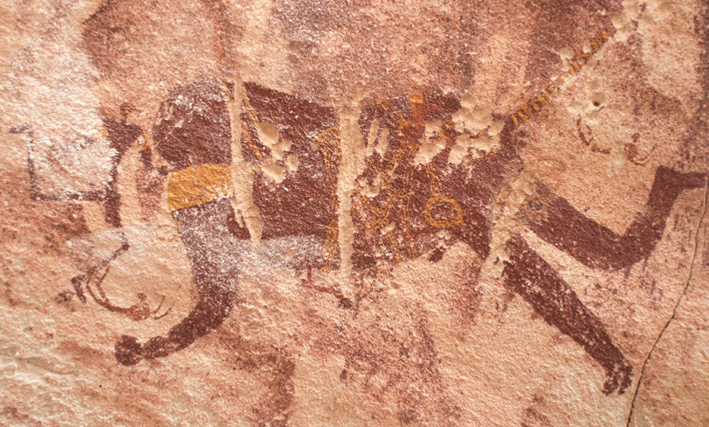 I prefer the idea that these creatures were monsters of the mind and existed in the same way as vampires, werewolves and witches. Throughout the course of human history we’ve been accompanied by a menagerie of threatening entities and our cultures are saturated with monsters. Norse myths, Greek legends and Chinese folklore; it’s part of the fabric of being alive.

The monsters that threaten us during the night would have had, at least, an equal presence when the sun went down and the wind blew across the desolate dunes.

Monsters from Ancient and Medieval Cultures

Hunting, carrying Giants and hand selfies was our forefathers life's responsibilities.
edit on 18/4/16 by Cobaltic1978 because: (no reason given)

posted on Apr, 18 2016 @ 03:52 PM
link
a reply to: Kandinsky
Wow, you really did a great job at putting everything together. Amazing.
Thank you for this great thread!

originally posted by: Kandinsky
a reply to: Cobaltic1978

It's evident isn't it?

Your thread this more like a great book to me!

posted on Apr, 18 2016 @ 03:58 PM
link
Based on the images alone, these "monsters" appear to simply be primates of some sort. The powerful hunched shoulders obstruct where part of the neck/head is from a profile or side viewpoint. The ears, eyes, mouth, rear, and tail suggest this as well.

It's very possible that this desert area was cultivated too much, destroying irrigation sources, and leaving it a desert much like we see happening in modern times. Once desert begins encroaching upon an area it's very difficult to reverse. All of the wildlife depicted denotes that there was indeed not just sand dunes in the area but plant life for the animals to live off of. Giraffes need tall trees for instance.

Food for thought. Interesting nonetheless. I didn't click on the links so apologies if I'm repeating what others have observed before.

Excellent thread! The first monsters in art - wow, maybe. They seem to be depicting enormous creatures who cause havoc and are intent on destroying the humans.
Also, the third picture could be someone diving, but it also looks like he's just been smacked in the mouth by the bigger guy to his right.
They are definitely telling a story though and I would love it if they are the same ones we tell today.

They are like an insight into the mind of whoever drew them. Yeah we know there are hundreds more from earlier periods and yet these look more like conventional nightmare beasts than the abstract 'alien' humanoid figures.

All the myths contain beasts and monsters and they aren't so common on the cave walls.

I've been chewing on these images for a few years

If my Lancer wasn't so demanding at the moment, I'd spit something worthwhile.

All I have to say is thank you.

Not all geniuses are interconnected, but it certainly assists in the art world, thanks for reminding me of that.

BTW - Any comedy impressionist from that era are long dead.

I thought the same thing when I first saw the images

After further thought and looking carefully into the animals of the time, it became more likely that they were simply monsters. That isn't to say they were trivial like some Monsters Inc characters. They might have been an existential reality to the people of the time.

Part of my thinking is explained in the OP. It's the art aspect. They could accurately depict all the other creatures and these ones are misbegotten. The artists could draw the legs of gazelles and giraffes and chose to show front and back legs of these critters in a different way; a way that wasn't technically comparable to any quadruped or primate. No heads either.

TIL; Details of adornment on cave paintings exist!

I knew they were often shaded, but I never saw jewellry and such like these!


BTW - Any comedy impressionist from that era are long dead.

Looks like a lion with a childs leg in it's paws.

As for the rest,I find it strangely appealing that there is so much...flow...None of the figures are crude stick figures,they all seem to be at the point of moving.It's real art.I think they are beautiful.
edit on 18-4-2016 by Ericthedoubter because: Removed gorilla because:silly me,no tail.


As for the rest,I find it strangely appealing that there is so much...flow...None of the figures are crude stick figures,they all seem to be at the point of moving.It's real art.I think they are beautiful.

They are beautifully done

That Bayeaux Tapestry reference was intentional. There's a sense of narrative on the walls and history has lost the context.

ETA - I've been mulling over the images for four years to the week lol. It was thanks to the much-missed Hanslune's thread - Life on Mars: The Gilf Kebir, Zerzura and the Cave of Swimmers
edit on 4.18.2016 by Kandinsky because: (no reason given) 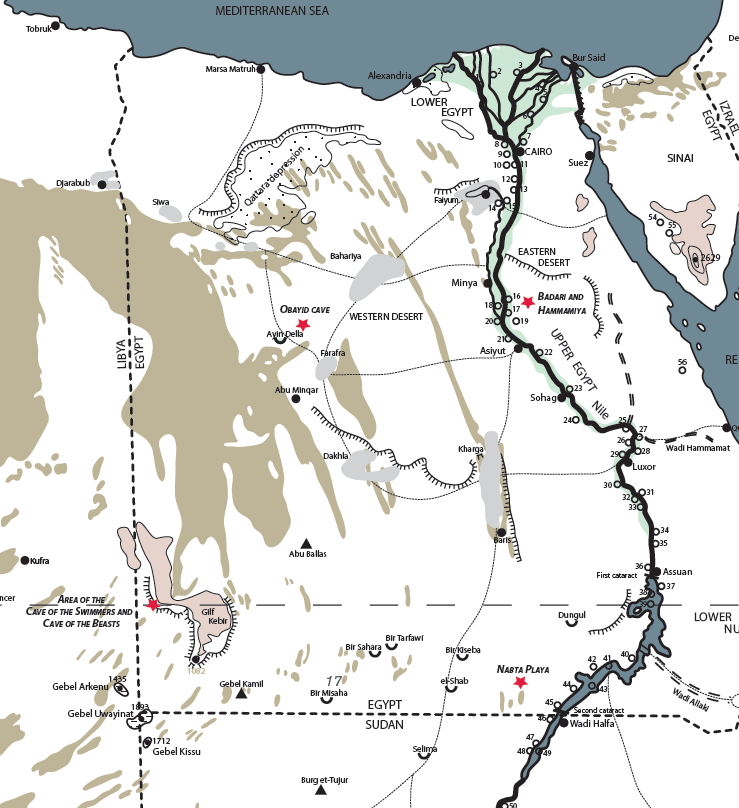 Gilf Kebir note the straight line into another site Nabta Playa.
Very good thread Kandinsky, this was one of the nurseries of what was to become various Nile Valley civilizations , the wet phase Sahara was like the Serengeti today, same flora and fauna. 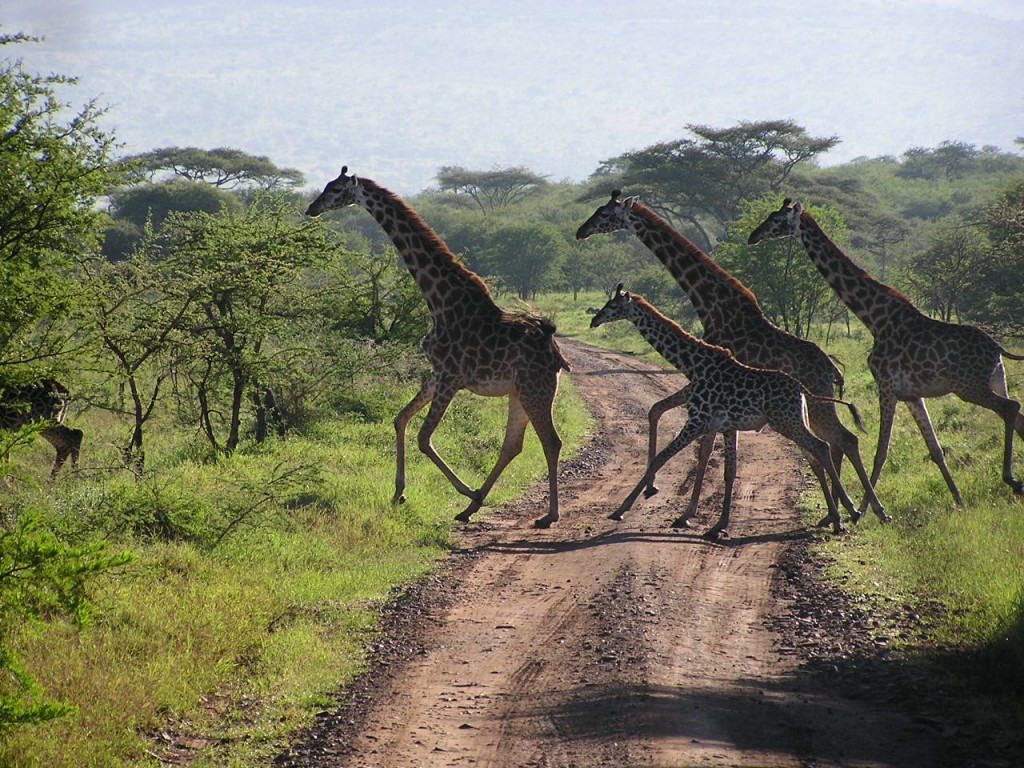 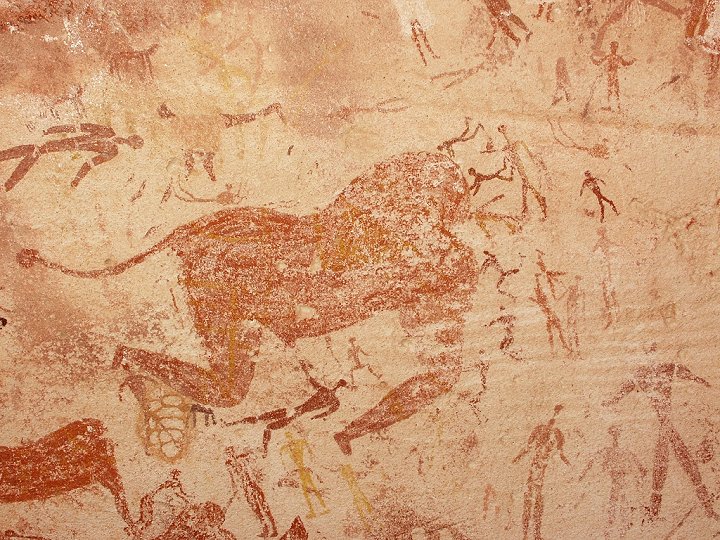 The Beast that devours 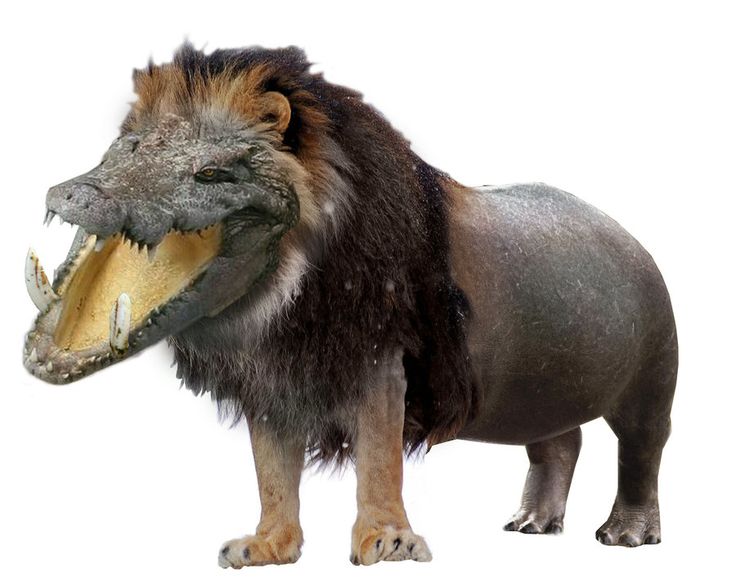 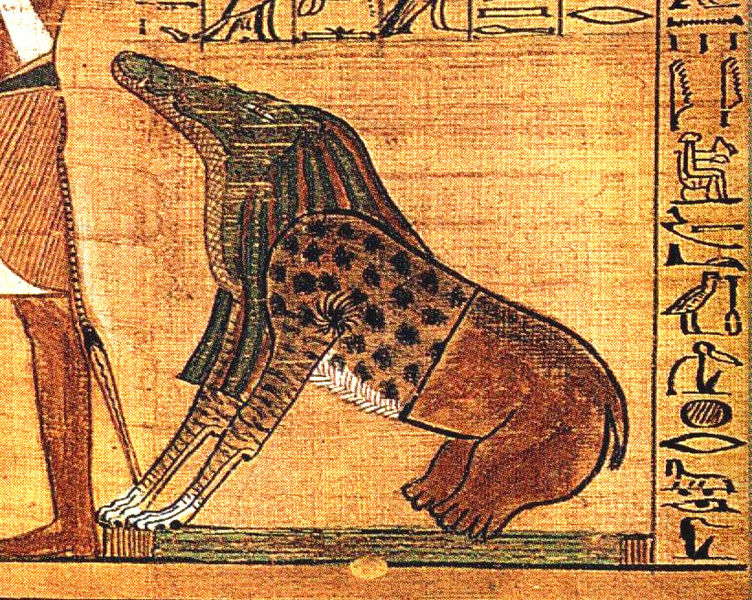 Ammit vs the beast.
Your link is good but also check this out too..
www.academia.edu...