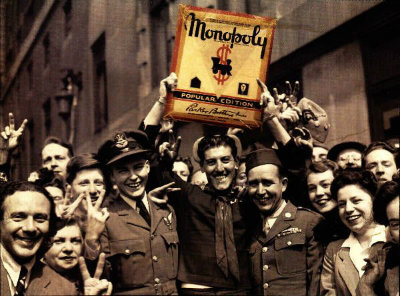 Back in the days of WW2 we were pretty creative. I stumbled on a website that talked about how the game Monopoly was used to help POW's escape capture. Real money was stuck in with fake money, a file, compass, and silk map were included in the game. The POW's were allowed to play this game because it was thought harmless... and it helped thousands of POW's escape. Pretty ingenious right? The credit for this plan .. well, it has to be given to two people really. Christopher Clayton Hutton, an MI9 intelligence officer and Waddington PLC, the printing company best known for its games including Monopoly, and printing maps on silk, rayon and tissue paper for military use and smuggling some of them to prisoners of war. I also found a bit about how they concealed maps into playing cards, cigars, shoes, etc..


Paper maps had some real drawbacks with regards to using them in wartime. They made lot's of noise, wore out easily, and turned to mush when they got wet. Waddington PLC was the only company at the time who had perfected the process of printing on a silk map.

Under the strictest of secrecy, in a securely guarded and almost inaccessible old workshop on the grounds of Waddington’s, a group of sworn-to-secrecy employees began mass-producing escape maps, keyed to each region of Germany or Italy where Allied POW camps were located. When processed, these maps could be folded into such tiny dots that they would actually fit inside a Monopoly playing piece. 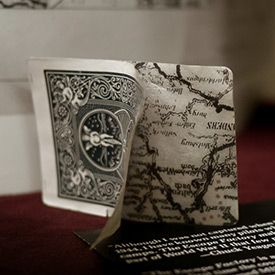 Fort Hunt in northern Virginia was a secret camp known only as P.O. Box 1142. This camp sent care packages from phony foundations to the POW's. In the care packages were baseballs, cribbage boards, and pipes containing hidden compartments that also contained escape tools and maps. A few quotes of interest:

"The baseball would have a radio transmitter inside. The cribbage board — as you moved the pieces you could listen to the channels of the BBC. The deck of playing cards, if you steamed the pieces apart, in between each card would be a little piece of a silk escape map," says Bies.

"Put into these special packages under these fake foundations were compasses, saws, escape maps, other items such as pairs of wire cutters," LaClair says.

During WWII, a pipe was made with a secret cavity that sat in the pipe’s bowl, right below the compartment that held the tobacco. You could stash your secret message in that cavity, and if you were about to be compromised, you simply twisted the pipe stem and the top compartment opened, allowing the burning embers to destroy the message. 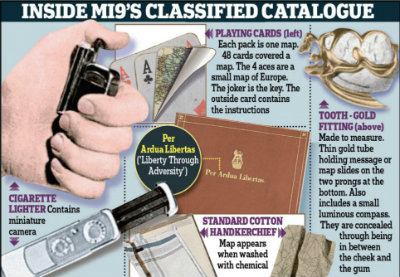 All that just to get to this: I wondered if we would/could be so inventive now a days. Would we, in the same scenario use the same ploys in order to help POW's get out of danger safely . (obviously using current tech)

And how would these kits look different now a days? I mean, what would someone be able to sneak into a POW camp that was disguised as something else? Anything?


Anyhow.. I've always liked to look back into history and see how ingenuitive we were and how we'd compare to those men/people today.. just found it interesting...

posted on Apr, 13 2016 @ 04:34 PM
link
I would think, with today's technology, it would be very hard, if not outright impossible, to sneak things like this to prisoners of war. Especially if they were high value prisoners.The packages would be scanned, xrayed and inspected piece by piece, before being given out. Look at Gitmo. I doubt any of them got such things.
You gotta hand to these guys though. Their thinking and planning saved untold lives.
edit on 13-4-2016 by DAVID64 because: correction

I would think you're right. Possibly low or no tech items like these would be what you would have to use. Or maybe there is no way... like you said. We would have to be way more creative now than back then to accomplish this task. Getting a map into a captured soldiers hands..how to do it in today's world. Interesting to think about .. at least for me anyways...

originally posted by: Misterlondon
Monopoly is still a good game, even by today's standards.

Yep! It still has Free Parking, rich people can still go to jail, and it has the only fiat currency that hasn't been devalued since it was first introduced.