I don't remember that -- I DO remember a lot of people calling him the anti-Christ and a Muslim. There was some references to a ring he wore and a bunch of other things. Lots of mud was flying before that guy even set foot in the White House.

It would be interesting to go back in time on ATS and take a look at he popular threads just before the election in '08. I'm sure you'd find mountains of threads that threw mud at Obama. People tend to forget all the crap that was thrown at Obama before he was elected...

originally posted by: Edumakated
I remember when Obama was running and you had all the sheeple crying, fainting, and having orgasms over him like he was the second coming of Christ. Good ole Chris Matthews nutting on himself with his tingle up his leg on national television.

I have a family friend who literally told me Obama was sent from God. WTF? Then again, Jaime Foxx proclaiming Obama is our "Lord and Savior".

I'm thinking to myself that Obama was like Jim Jones and just waiting on the Kool-aid to be passed around.


And im thinking, this is the SAME thing Trump supporters are doing

The only DC will get the message is if they hijack the convention and people come unglued. The GOP is working hard for a Clinton victory and I can't figure out why for sure!

posted on Mar, 8 2016 @ 11:35 AM
link
Well honestly we shouldn't hear from the Trump supporters, because every Bernie Sanders thread has had the same rhetoric. Bernie is a Dictator, next Hitler, etc. So, Karma is a ***** I guess. 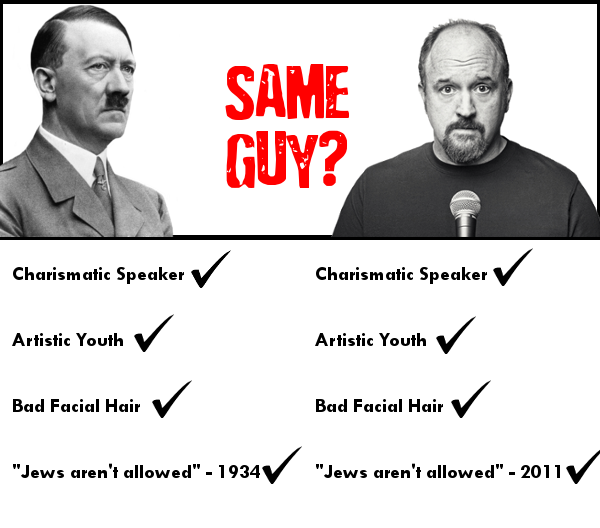 See what I did there? It's almost as easy as pulling out the race card.
edit on 8-3-2016 by Konduit because: (no reason given)

I think you got brain damage from drinking the liberal Kool-Aid. People that call him Hitler are the ones that are desperate, not the other way around.

Not yet. And what message?

You do realize that many of Bernies statements are interchangeable with Trumps right?

"I'd like to describe a candidate to you," Brzezinski began:

The candidate is considered a political outsider by all the pundits.
He’s tapping into all the anger of the voters, delivers a populist message.
He believes everyone in the country should have healthcare.
He advocates for hedge fund managers to pay higher taxes.
He’s drawing thousands of people at his rallies and bringing in a lot of new voters to the political process, and he’s not beholden to any super PAC.

Who am I describing?

"Or any special interests or any donors," Trump interjected. "You're describing Donald Trump," he said confidently.

I lol at this so hard when i heard it

posted on Mar, 8 2016 @ 12:33 PM
link
They've been comparing him to Hitler since his literal announcement to run. It kind of numbs you to the comparison at this point

There are some definite differences:

- Supports massive domestic surveillance programs
- Claims he'll "open up libel laws" so that he can sue for "negative articles" and "win lots of money"
- Supports trampling religious freedom by requiring Muslims to register and be put in databases/subjected to even more unconstitutional surveillance programs.
- Believes American soldiers should murder the families of terrorists
- States that most illegal immigrants are drug smugglers, rapists or both
- Encourages supporters to physically assault protesters

So what about the current guy in the oval office, and that guy named Snowden?

As long as I have lived suing people to get a bunch of money has been the 'American Way' for decades,but when it comes to the media, and politicians ?

There is suddenly a 'problem'.


- Supports trampling religious freedom by requiring Muslims to register and be put in databases/subjected to even more unconstitutional surveillance programs.

There's no problem when it comes to gun owners now is there?


Believes American soldiers should murder the families of terrorists

I guess Trump critics IGNORE this FACT because it doesn't fit their FALSE narrative of Trump.


States that most illegal immigrants are drug smugglers, rapists or both

Other than Trump critics having a hard time listening to the TRUTH.


The murder of Kathryn Steinle on the Embarcadero in San Francisco by an illegal alien is the most familiar example of a crime committed by an alien. But an unreleased internal report by the Texas Department of Public Safety reveals that aliens have been involved in thousands of crimes in Texas alone, including nearly 3,000 homicides.

PJ Media obtained a never-before-released copy of a Texas DPS report on human smuggling containing the numbers of crimes committed by aliens in Texas. According to the analysis conducted by the Texas Department of Public Safety, foreign aliens committed 611,234 unique crimes in Texas from 2008 to 2014, including thousands of homicides and sexual assaults.

It's no wonder why Trump critics call him Hitler.


- Supports massive domestic surveillance programs - Looking into this one..have not heard this...

- Claims he'll "open up libel laws" so that he can sue for "negative articles" and "win lots of money" - This is not something a president would do...next...

- Supports trampling religious freedom by requiring Muslims to register and be put in databases/subjected to even more unconstitutional surveillance programs - Wrong. He stated that when they are entering the country, they should be truthful and honest if they are coming from (inset ME country). You also know that ICE already had this, right? Trump just wants to fund it and make it work.

- Believes American soldiers should murder the families of terrorists - or did he say that a terrorists family is not safe either? There is a big difference.

- States that most illegal immigrants are drug smugglers, rapists or both - THEY ARE ILLEGAL. What part of this do the ones who defend ANYONE who is breaking the law? I feel for the impoverished but not on my dime when there are those trying to do it legally.

- Encourages supporters to physically assault protesters - Did he say kick their ass? Did he say kick them to the ground and stomp them like the dark skins they are???? Nope, I think he old them to 'get them out of here" and how in the 'old days' things would be different...

You know what...they would. What was wrong with civility. A protester is not civil so what gives them the ability to expect to be treated in any way other than the person/activity being protested ?

Calm down killer. My post was a response to a post comparing Trump and Sanders not Trump and Obama or Trump and Bush.

Any excuse to go off half cocked on a nonsensical rant about something else entirely?


You, sir, just won the internet!

I LOL'ed so hard.

Have ANYTHING other than ad homenin's ?


My post was a response to a post comparing Trump and Sanders not Trump and Obama or Trump and Bush.

Clearly some people want to make comparisons to KILLERS. Which I did.

So tell me how much blood does Trump have on his hands compared to those other two 'leaders' ?


Any excuse to go off half cocked on a nonsensical rant about something else entirely?

Trump critics sure do like to go off half cocked. I guess that why they have been trying to ban guns for the last 75 years.

Trumps critics heads would explode if their was 'muslim' free zones, but since it's LEGAL US residents. They don't give a ratt's snip.

Their constitutional RIGHTS don't mean anything.

Funny thing here is I don't even like Trump.

Hes' not even in my top 5 people of wanting to be president.

But I am gonna say this.

I wasn't even going to vote this year.

It's obviously the last-ditch effort of the desperate, who really have nothing left in their petty arsenal. Hitler had a passion for art, so we might as well compare Picasso to Hitler while we're at it. That's right; in the minds of so-called rational people, there is an irrational fear that America in 2016 is going to resemble Germany in the 30's, and that a possible president of the United States of America is going to enact Nazi and SS policies on his people once he gets into office. That's the implication of this stupidity and outright propaganda, which has no basis in reality, and is founded on fear and stupidity.

He was also responsible for shooting Kennedy - I know this because he was alive at the time and that is enough proof to draw my conclusion.

It quite clear he was also responsible for the holocaust - I think we can stop blaming Nazi Germany now - it was clearly Trump who did it.

Surely Trump can't be allowed to build a dome over the US and kill anyone who comes within 100 miles of it? I know he only said a wall, but he really MEANT a dome with missiles on it (nuclear ones as well).

When he said he would allow water boarding and worse, what he really meant was that he was going to chop the heads off everyone who wasn't a property developer.

He is obviously quite mad with his rants against drugs, so I can only conclude that he REALLY wants to force everyone in the world onto crack coc aine before he kills them all. It's a big conspiracy so that he can make $1000bn

Then, he obviously wants to carry on Obamacare because he said he wants to repeal it - come on read between the lines people! He is clearly working for Obama.

I think its also very very clear - beyond doubt now - that he will appoint David Duke to lead the fight for effective immigration policy.

Finally I think we can all agree - even if you are too slow to have figured out the above - that he plans to use rapists flooding over the border (allowed into the dome) to rape every woman in the country and then force them to pay Planned Parenthood for an abortion. Come on, he's practically said so.

It's amazing he is still in the race - but his supporters must clearly be racist, murdering, rapists too. It's obvious.

Now I am going to retreat to my safe space so as not to get too scared by all of this.