originally posted by: onequestion
I know this is hard to comprehend for a lot of people but a lot of Mexicans(not all) really don't like America or Americans. They are here for benefits and to either send money back to their relatives, save money and eventually go back to Mexico... Or a other reasons not worth listing.

They are mostly nice people don't get me wrong and I can't really blame them for wanting to leave their country but the truth is the truth ok. I don't know why... It doesn't really make sense to me.

It's weird when you meet someone who's lived in the US for over a decade and still doesn't speak the language and has no intent on learning it. Why is that? How is that even possible doesn't make sense to me?

It's weird because when I want to show that I'm trying to be cordial and respectful the first thing I do is try to learn more about their language and culture and communicate this interest in learning as a way to find a common ground.

Isn't that weird? So many immigrants coming here but hating us and our culture but taking full advantage of its resources.

Oh if you call me a racist don't plan on a response I'm not listening to that.

No matter how many interactions you've had, this is anecdotal. And obviously you're not a fan of mexicans, so you're also at least slightly biased on top of that (no matter what you think)

A Canadian said to Hank,
Tell me who our prime minister is?

So,
Why should I care what Mexicans in my country think of its people?

I already speak 3 languages, French is one of them.

Whats your excuse for not learning another language, when a large portion of your population speaks it?

Yes I'm making an observation so it's going to be anecdotal.

Sorry I didn't conduct any studies I don't have time for that.

Then I would refrain from making declarative statements like:

But really, there's a thousand reasons why somebody would assimilate in the way you are saying. I may not agree with it, but that's their choice.

Also, were we talking illegal immigrant vs citizen or? Cause that actually would change my opinion some what.

By the looks of it they are wining


Illegal immigration into the southwest states is sometimes viewed as a form of reconquista, in light of the fact that Texas statehood was preceded by an influx of U.S. settlers into that Mexican province until United States citizens outnumbered Mexicans 10–1 and were able to take over governance of the area. The theory is that the reverse will happen as Mexicans eventually become so numerous in that region that they can wield substantial influence, including political power.

It was never theirs, they weren't alive when it was taken.


Do we have a official language?

We all know The U.S. has no " official language"

By that score it is assumed anyone can speak whichever language they wish. That includes " Bad Language "


Back then that would buy you a million sheeple

posted on Feb, 25 2016 @ 03:03 PM
link
In most cases, you have it just about right Onequestion. But the ones born here have accepted this as their home. They have learned to like it here. Even some immigrants have learned to like the US. They do consider many of us spoiled people though, being brought up in a place where you had a hard time making ends meet while they lived there. Do you really blame them? We take this life here for granted.

Some of them just want to get far enough ahead so they can go back to their families and friends and not have to worry about anyone starving. Is that wrong?


It's weird when you meet someone who's lived in the US for over a decade and still doesn't speak the language and has no intent on learning it. Why is that? How is that even possible doesn't make sense to me?

Aah, yes, you're coming from a position of white privilege.

posted on Feb, 25 2016 @ 03:04 PM
link
Every Mexican American I know loves this country, especially its people, since they are part of those people.

Every Mexican I know also loves this country. It pays better than their own country.

That is my evidence. Where is my thread?

posted on Feb, 25 2016 @ 03:05 PM
link
I know nothing about the culture of California outside of Hollywood tv shows/movies.

But I do know it's a common theme on Hollywood tv shows/movies where people say to another person "how could you have lived in LA all your life and not speak any Spanish?".

So my question is, has the OP even attempted to learn any Spanish?

posted on Feb, 25 2016 @ 03:05 PM
link
a reply to: xuenchen
OK let's get things straight.
That land was settled by SPAIN,
that's why you have San Antonio, Santa Fe, Las Cruces, Los Angeles, San Diego etc.
Mexico gained Independence from Spain in 1822 and Neglected the North territories.
Mexico's President Santa Ana is the one that orchestrated the 'loss' of said land.

Ricky, that "get ahead back home" idea was the reason behind a Honduran friend & her mother coming to the US some years back. They did come legally, but busted their asses living in poverty to send money back home to the terminally ill sister they were here to support so she could die in better conditions instead of a slum.

That is NOT wrong. 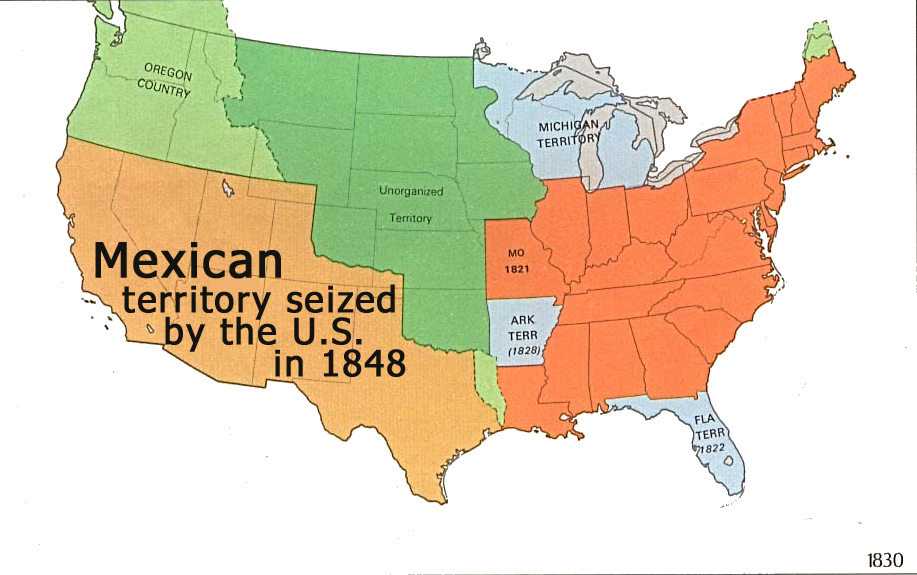 Hey everything is legal in Mexico ! It's the American way !

posted on Feb, 25 2016 @ 03:19 PM
link
a reply to: xuenchen
First Texas revolted against Mexico and Santa Ana directed the Mexican Army, General Sam Houston captured Santa Ana and in exchange for his life Mexico recognized the indepence of Texas.

Later on the US invaded Mexico and Santa Ana (still President) was in cahoots with the US president as he was directing the Mexican Armies... (and didn't actually stopped the invasion) in exchange for 15-30 million pesos. (The rest of the Territories)

posted on Feb, 25 2016 @ 03:23 PM
link
Couple the OPs anecdotal evidence with the fact that only 36% of Mexican immigrants ever naturalize compared to 71% naturalization rate of every other demographic and 41% of other hispanic immigrants, and OP may actually have a point.