originally posted by: Kantjil
a reply to: Ghost147

Ive wathced clips on youtube, where a fixated point makes a cool effect and its circulating around..

The Earth generally rotates on its axis and this gives the stars their 'swirl' from most places on the Earth.

The real situation is that so many things are in motion that sometimes their paths are anything but nice clean circles. Most of the planets trace loop-the-loop patterns across the sky. The Earth's axis is inclined about 15 degrees to its orbital plane. Not all planets orbit the Sun on the same plane, either, and the orbits aren't circles, they are elipses.

Think of someone swinging several different sized hula-hoops at once. Crazy.

you answered a lot of questions, thank you.. And you destroyed my thesis completely and make another thesis a lot stronger which reference northern hemisphere as the ancients and the icelandic spar, and not the vedas and India..

originally posted by: Kantjil
a reply to: Ghost147

Isnt saturn a planet you can use for a fixated point?

By the way, Saturn (or any planet) is even less of a fixed point than a star. All of the stars appear to move as the Earth rotates under them, but they all move together, and the rising and setting times for any star occurs at virtually a fixed time for any given day i of the year (but each star rises and sets at a slightly different time each day due to the Earth moving around the Sun during the course of a year).

Saturn (or any planet) on the other hand, moves more independently than the rest of the stars. This is due to two different things: (1) because the Earth itself is moving around the Sun, and because the distance to the planet is relatively close compared to the distance to the stars, we are seeing the planet from a different point of view against the far-away background of stars, and (2) the planets have their own orbits around the Sun, so the position against the background of stars as seen from Earth will change.

It's hard to notice this movement of the planets relative to the background stars from one night to the next, but if you watch the position of a planet relative to the background stars aver the course of a month, you will see that the planet moves differently than the rest of the stars. The ancient Greeks noticed that the planets "wander" like this"wander", which is exactly why they are called "Planets"; the Greek word for "wanderer" is "planētēs".

Another aspect of this "wandering" movement over time against the background of stars can cause the planet to appear to move one way relative to the stars, then seemingly move the other way, them move back again (as in the image below). This is cause by the Earth passing the planet during the orbits of the planets: 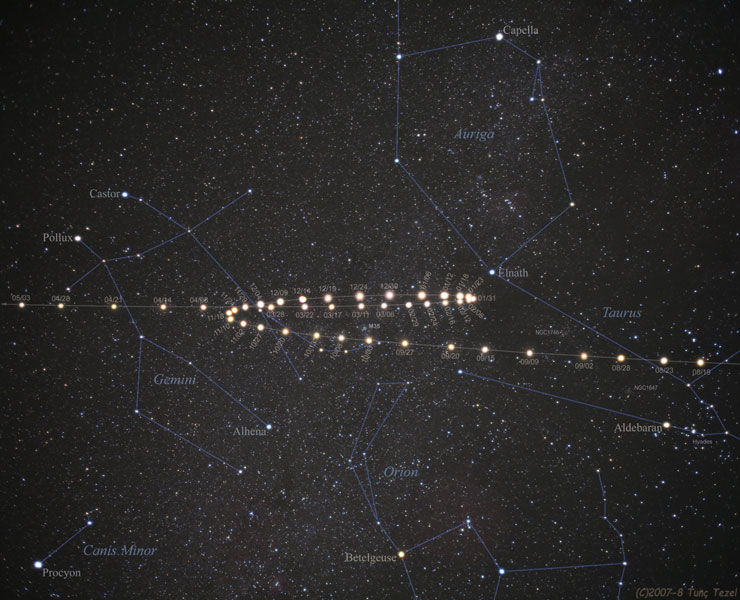