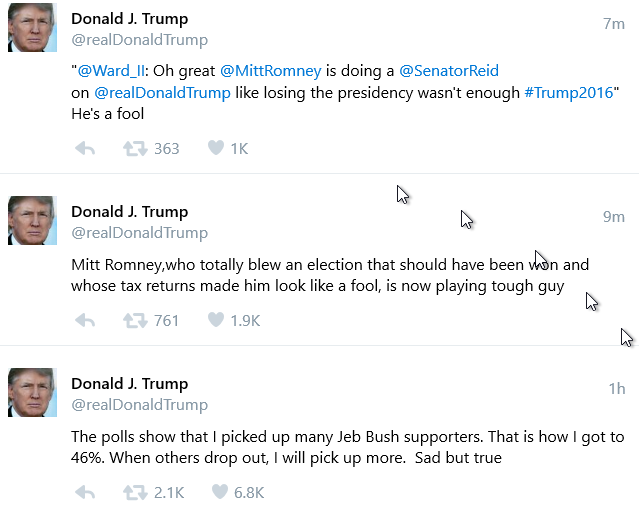 This election is brilliant

Huh? Why would the Obama admin waste their time doing that?

LOL! The best part of his tweets was "Sad but true".


originally posted by: PsychoEmperor
In just picturing the millions of Americans sitting at home trying to decide whether they want to vote for Clinton or Trump or Sanders or Cruz... "I'll just wait till I see his tax return for 2015... Yeah that'll be the decider"

So funny when you really think and picture these arguments.

I think you are way wide of the point.

The fact you don't think it will be a problem is pretty irrelevant. The point is that a republican, Romney, is on the attack and doing the TV rounds to cast doubt on their own leading candidate. Whether it will work or not is another question, but amazes me that he would be shining a light on it right now.


I don't think it is irrelevant.

I don't take anything seriously that comes out of Mitt Romney's mouth.

He cannot even care for a pet properly...

Somewhere recently they’ve had some secret meeting, GOP big shots, and have probably come up with a plan to derail Trump and indeed this may be the harbinger of that effort

This is really amazing coming from Mitt Romney after his little failure to produce his own tax returns when he was running.

It’s not the first time Romney, the former chief executive of Bain Capital, a successful private equity firm, has performed a verbal do-si-do on stage with regards to this question. Last month, he told Chuck Todd of MSNBC, “I don’t intend to release the tax returns. I don’t.” But later, he was more equivocal, saying, “Time will tell,” and “I’ll keep that open,” and then suggesting that he “wouldn’t be opposed” to releasing the forms, “if that’s been the tradition.” Finally, he said he’d “probably” release them—but only maybe, and only if he becomes the nominee.

But now here is an interesting thing...

The thing is, Romney doesn’t have to release anything if he doesn’t want to. Legally, tax returns are private. Presidential hopefuls must only file a financial disclosure report to the Office of Government Ethics, and Romney did that (revealing, for the record, that he’s worth between $190 and $250 million buckaroos).

Pretty sure Mitt really isn't the guy to be calling someone out because of their taxes...I guess he has a short memory.

posted on Feb, 24 2016 @ 07:31 PM
link
So now they are attacking their own... Because he is not really "their own". Not part of the establishment. Polished and shined to become president.

I swear if you asked Ted Cruz what color the sky is he would have to refer to a pre planned answer written by somebody else.

The Republican debate Trump boycotted he got to stand in the middle, that was his day in the spotlight. Thanking the other candidates for being there,,, talking down to them it seemed to me.

He must be furious. Reminds me of Shooter Gavin in that Adam Sandler movie when he plays golf.

I just hope they don't make him a deal like he picks Cruz or Rubio for VP and then resigns.

My vote is for Bernie Sanders, if Hillary steals the nomination I vote Trump


Pretty sure Mitt really isn't the guy to be calling someone out because of their taxes...I guess he has a short memory.

Not that Obamacare is any good or the democrats are any less of hypocrite , but it shows how dumb fat and lazy the establishment has become that they don't even try any more.

posted on Feb, 24 2016 @ 07:52 PM
link
Could the bombshell be a contribution to a left wing charity like planned parenthood?

I am pretty sure he has said he gave money to Hillary at one point. To buy favors as he put it.

originally posted by: Daughter2
Could the bombshell be a contribution to a left wing charity like planned parenthood?


We already know he has given money to the Democratic party.
Planned Parenthood might be more of a problem...

(post by carewemust removed for political trolling and baiting)
vonclod

Here's one of the news articles from that day.
www.politico.com...

Mitt Romney initiated a call to Fox News to share this supposed "bombshell" information. Didn't mention what tax year. I think he was just feeling hate for Trump. Unusual for a MoreMan.

" The message is even stronger .. "we have good reason to believe there is a bombshell in trumps taxes" "


Yeah , The Bombshell being He Actually Pays Taxes , Unlike about Over 50 Percent of the Population in the United States . In 2005 , his Declared Income was 150 Million , he Payed 38 Million in Taxes that Year . I'd Fire his Accountant .
edit on 15-3-2017 by Zanti Misfit because: (no reason given)

More than likely true..so much speculation or innuendo coming from all sides on so many issues, with no solid "gotcha" info..chairman Mao said sh#t or get off the pot..best thing he ever said, well that and kill all the bureaucrats.

originally posted by: Zanti Misfit
a reply to: UKTruth

" The message is even stronger .. "we have good reason to believe there is a bombshell in trumps taxes" "


Yeah , The Bombshell being He Actually Pays Taxes , Unlike about Over 50 Percent of the Population in the United States . In 2005 , his Declared Income was 150 Million , he Payed 38 Million in Taxes that Year . I'd Fire his Accountant .


The other thing from last night for Mittens to chew on is that Trump earned about as much in 1 year as he is worth from his whole life's efforts.