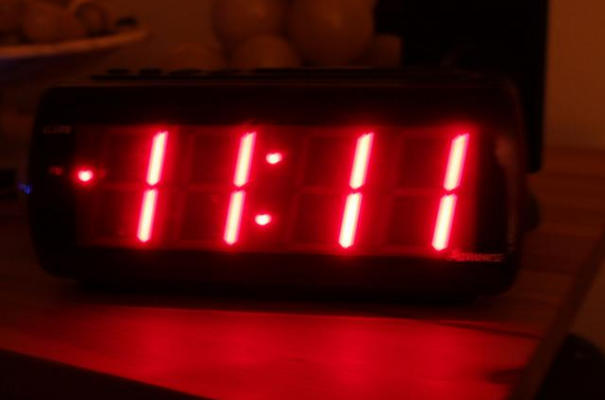 People all over the world are seeing 11:11 or 20:02 or 21:12 or 14:41 etc. Frequently and I am one of them
I thought it was because I've always been a clock watcher and can't wait to leave work even though I love my job, and the fact I spend a lot of time in front of a computer. And of course double digit numbers are going to stand out and be noticed more often than other numbers.

I have been doing extensive research on other subject and 11:11 cropped up in my search . So I sat down and gave it some thought and this is what I came up with. But first let's see what other people are saying.

Numerologists believe that events linked to the time 11:11 appear more often than can be explained by chance or coincidence. This belief is related to the concept of synchronicity. Some authors claim that seeing 11:11 on a clock is an auspicious sign. Others claim that 11:11 signals a spirit presence. The belief that the time 11:11 has mystical powers has been adopted by believers in New Age philosophies.


If your attention has been drawn to clocks and watches at exactly 11:11, then read the following:
I started experiencing this rather bizarre occurrence when I was forty years old, at first I thought they were coincidences, I would stand with my back to a digital clock and something made me turn around and I would notice that the time would be 11:11. These incidents intensified I would be checked into hotel rooms on floor 11 room 1111. I started noticing these digits on computers, microwave ovens, cars, documents, etc. I decided to write about it on my website. I was immediately inundated by hundreds of emails from all around the world. Individuals were telling me their own 11:11 stories, almost always saying “I thought it only happened to me”. It is difficult for me to decipher what this is all about but my intuition tells me its positive.

The abundant occurrence of the Triptych across the ancient world is not a random coincidence. The Triptych represents more than merely an architectural element; the Triptych is the chief symbol of an advanced Universal Religion that was once shared globally in Antiquity, mainly by the pyramid cultures. The discovery of the Triptych provides, for the first time, conclusive evidence that ancient cultures worldwide shared the same spiritual beliefs. It also indicates that these cultures did not evolve independently, but were probably descended from the same more remote parent source.

The Universal Religion symbolized by the Triptych was banned in the West 2,000 years ago by the Catholic Church, but nonetheless it has continued into modern times, surviving in the beliefs of Secret Societies and their art and architecture. Look, for example, at the headquarters of the Freemasons, the Skull & Bones, the Shriners and the Knights of Pythias. Each building’s façade depicts an unmistakable Triptych pattern:


My feeling is this;

11:11 is a perfect number as its symmetrical left to right, above and below, positive and negative, Male and Female.

In ancient times they believed in the 3 in 1 "religion"

The ancient Celts (Irish) said to saint Patrick before he conned them into believing in the Bible. The 1 is in 3 the 3 is in 1. They already had there own belief (paganism) why change unless you was tricked? But that's a whole other can of worms.

That's what I think.

Proof of Divinity? That's for you to decide.

edit on 20-2-2016 by DaysLate because: (no reason given)
edit on Sat Feb 20 2016 by DontTreadOnMe because: EXTERNAL QUOTE TAGS ADDED IMPORTANT: Using Content From Other Websites on ATS

posted on Feb, 20 2016 @ 11:40 AM
link
Or maybe that people look at a clock so many times a day the probability of seeing ones of those times stated are quite high..

I love this subject! I have experienced this phenomenon since I was a young teen and never knew it was something commonly experienced by others. This was before the internet was at my fingertips for quick research and corroboration. I always felt the instance 11:11 or any variation 1111 , $11.11 etc. was a very important signal.

It is an auspicious number for me and nothing will ever convince me otherwise. The sum of my experience leads me to this inescapable conclusion. It is asking us to pay attention.

If indeed this number is rooted in some archetypal mysticism, I wonder why we continue to see this number in the present day? What is the force behind it? Why is it trying to revive itself?

I am off to check out the videos. Thanks for posting! I hope some day all answers and mysteries will be revealed. Until then, we just have to keep our heads up, our eyes open, and our ears clean!

Nice read, although I didn't clink on the links. I'm one of those 11:11 people with no clue what it means.

Regarding the 1 is in 3 and 3 is in 1, and while I am no scholar in these fields, nor any, what comes to mind is the upper portion of the Kabbala and/or Gurdjieff's notions of World 1 and World 3. You might want to check them out, hehe.

posted on Feb, 20 2016 @ 11:54 AM
link
The 11:11 phenomena was attached to me like fleas for several years. Over the last 3-4 it has seemed to abandon me.
It's quite foreboding actually, I feel like it could mean something terrible for my future. My psychic powers have been diminished as of late also.


How about discussing the topic?

You can start with why you think this phenomenon is nonsense (as that seems to be your stance.) Attack the issue, not the person who posted it.

LMAO...it is a God's gift...someone on here feels rather enlightened

I have been seeing a lot of 11 mins on the clocks daily...I had a look into this, and it seems like 11 number is strong with me. I did a numerology test on myself, I am not quite sure if spirituality has anything to do with me seeing number 11 on the clock, but it really feels weird and has been creeping me out the past month!

Third line...you still haven't solved the 11 mins riddle...and everything you copied and pasted is just "new age" theory. Still have more work to do in your own thread in order for you to claim the word "solved" in each and every thread of yours bub. Just a heads up
edit on 20-2-2016 by Skywatcher2011 because: (no reason given)

posted on Feb, 20 2016 @ 12:02 PM
link
a reply to: DaysLate
Well. I'm sorry but I don' visualise any numbers at all, so I must be odd.
What I do visualise quite often is Kim Kardasians oiled up, naked bum. Or is it one of the other ones.
Please don't take offence at my thoughts.


Some people, such as myself, don't try and visualize the number before seeing it. For instance, I can be typing on this computer for quite a bit of time and ask myself "will there be an 11 mins on the clock no matter the hour?" and then I would look and about 60% of the time or more I would see the 11 mins on the clock.

On the other hand, why think about numbers when you can visualize massaging a nicely oiled KK bum bum

originally posted by: Misterlondon
Or maybe that people look at a clock so many times a day the probability of seeing ones of those times stated are quite high..

Maybe for some I suppose. I however rarely look at a clock, and every single time I look at one at eleven minutes after eleven O'clock the clock shows 11:11. coincidence? I think not

You're such a deep thinker....

posted on Feb, 20 2016 @ 01:19 PM
link
Until the elite show people how Numerology + Sacred Geometry + Sound (frequency) = Levitation + Divination; all of these number coincidences are worthless.

Its all irrelevant until the elite show us how it all fits together.

originally posted by: LostThePlot
11:11 stands out because it's the oddest looking time.Nothing supernatural about it.


Oddest looking time? To whom? To everyone? I can go with you on saying there's nothing supernatural about it, but come on...try a little harder here. Can you really explain why a number looks odd and another doesn't? They're numbers. Nothing odd about them at all.

In my opinion 5 is pretty odd-looking. Therefore I proclaim 5:55 is the oddest-looking time of them all!


The number of the Garden of Eden before the fall of man was 22.

After the fell, over the years humans lost consciousness of 11 of these original 22 primal elements.

This is in the macrocosm

In the microcosm its 9 rather than 11. A long story I can’t explain now…

Therefore in the primal synchronicity of reality this 11: 11 is reflected in the fact that when these missing 11 return to the Garden of Eden humans will have returned to paradise, 22.

That’s all this world is about.

I hate using this as an analogy; but its really not an analogy its REALITY

That’s true but what are they talking about… 3 what

3 equals one, holistic self, Holon, or entity, or God

It is for you to decide how aware you want to be. Just follow the golden rule and you will be fine. . My hunch is that it is just someone who is trying to get you to understand something thru the unconscious with the help of psychic abilities.