I found it well worth watching, though also pretty sickening.

A requested summary : A documentary looking into the Franklin cover up story, focused around a child paedophile ring involving some high up and influential figures who took very young children and abused them (sexually and otherwise) using drugs and fear as incentives to continue and be silent. Also from my point of view makes me look at not just how depraved the abusers are, but also how despicable the people are who would help cover this up even though they may have never even been involved in the bulk of it therefore it is most likely bribes and promises of career advancement that ensures their co-operation. How people could overlook child abuse for Notes and titles is beyond me.

originally posted by: RevolutionAnon
Thought I would post this as it has very low views for a Youtube video of this type.

I found it well worth watching, though also pretty sickening.

Is this your video?

Yeah I really need to get some sleep.

Summary or just a link?

Thanks for sharing. It is scarily close to what is happening and being covered up in UK. Including the Satanist bits, which I originally thought were to discredit the story but after watching a bit of this documentary and reading online I'm not sure now.

Just mention the Hampstead anise scandal on here and you get flamed.

It amazes me how little will ever be taken on board from these things. You would think child abuse of all things would inflame some outrage not just in the victims but worldwide. Alas people will see these videos and articles, tut and sigh, then move on as if it will never happen again. Not only did a lot of children suffer abuse, but one of the girls received a prison sentence 9-25 years (10 years more than the organizer of the paedophile ring who was charged with stealing 40mil) for ""lying", a man and his 8 year old son were killed in a plane "accident" after he had found evidence that could of helped the case and another of the child victims was scared into changing his plee, then changed back to the original, then his brother was killed so he changed his plee again fearing for himself and the rest of his family. I believe he was found dead shortly after being interviewed for this documentary which was pulled from air and copies of it destroyed besides this leaked one. Crazy

I've just gone over some of the stuff on Twitter about the Hampstead abuse scandal. The trolls using really basic discrediting techniques muddy the water.

I agree. People click on and do nothing about it.

originally posted by: and14263
a reply to: RevolutionAnon

Thanks for sharing. It is scarily close to what is happening and being covered up in UK. Including the Satanist bits, which I originally thought were to discredit the story but after watching a bit of this documentary and reading online I'm not sure now.

Just mention the Hampstead anise scandal on here and you get flamed.

I would think that it's actually linked to the the UK, and that includes Kincora boys home in Northern Ireland, generally considered to be a boys brothel run by MI5, as well as other parts of Europe and the Americas.

Officials seem to be desperate in still trying to conceal things that in varying ways have enquiries stalling, or stopped altogether, over events that happened coming up to near forty years ago now, presumably in the hope that those involved will soon be looking at the lid, apart from those that already are, that is.
People who would rather turn away from the reality, are only kidding themselves, and for those who have been around for all that time and more, it is pretty obvious that this is being kept down from the very top, in the Americas, in Portugal, in Holland, the UK...God knows where else. So there you are, our great Secret Servicers...literally.
Now they are spying on us, for some portfolio or another.
Oh! as for your trolls, it's the same on a lot of blogs, I've been looking at a few myself.
Now since this video has been around for some time, looking back at a few Youtube channels that have featured this video wouldn't be a bad idea either!

originally posted by: and14263
a reply to: smurfy 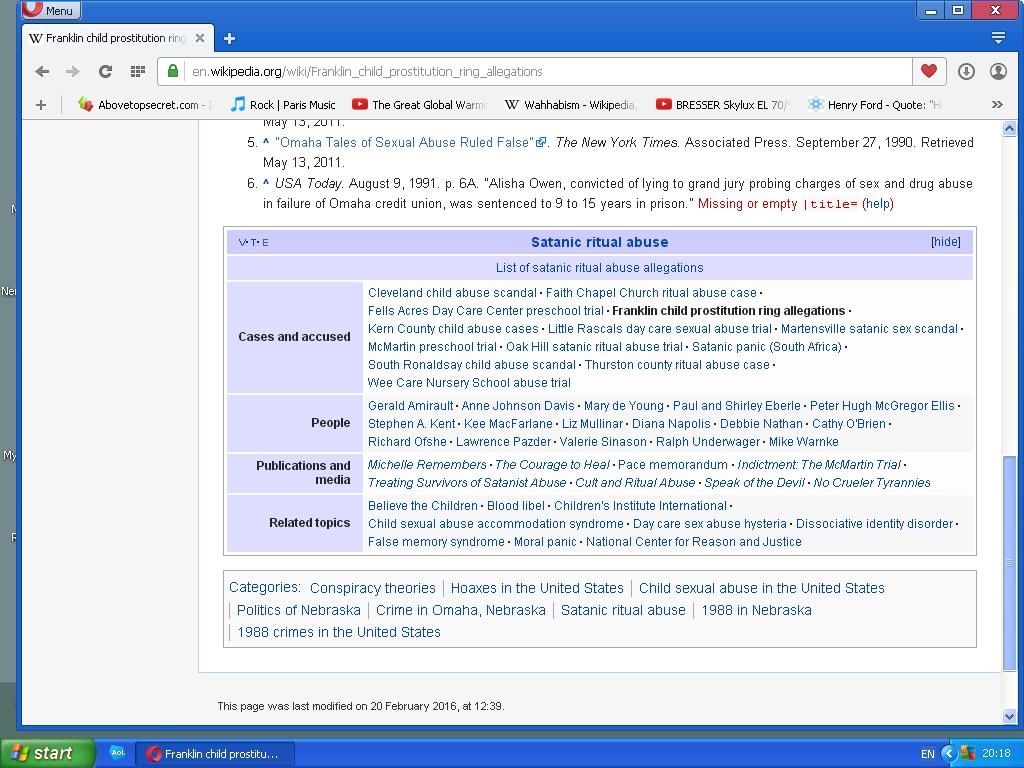 posted on Feb, 20 2016 @ 03:07 PM
link
Here in Australia at the moment a Royal Commission is being conducted into child abuses by members of Catholic Church..

we have a Cardinal hiding in Rome behind the skirts of this new Pope....Cardinal George Pell claims he's too ill to come home to face the music....he has a doctors certificate....

this is ....I think the 3rd time that Pell has been summoned to appear before a Royal Commission to answer for the behaviour of some priests under his leadership.....he would not discipline these paedophiles...they were transferred around the country...Pell allowed these men to roam and graze freely on the children at Catholic schools....

Pell's a perfect example of his self entitled generation in a position of authority....the old boys club where they could hide behind Catholic Barristers and the Catholic heads of police...who would not investigate the victims claims...

the above seems to be the backbone of the western capitalistic world....since the industrial revolution...use and abuse people including children to get your jollies and to make a profit......that's all that matters to these low life's.....

Also 9-15 years is incorrect (It is 9-25) plus a lawyer was brought in to try and get the girl put back in prison. No remorse.

I've seen this documentary before, the production value on it isn't very high but it's one of a handful of conspiracies that are very likely to be true. Any time I can get people interested in them, I bring up Boystown and this documentary.

You have to do some digging to find it, but there is a lot of corroborating evidence for there being (to this day) a pedo ring run by high level members of government and business.

Yeah it was a rough cut so to speak as it was pulled from being aired. I guess real production and final touches never happened before it was pulled and the copies were withdrawn except the escapees. Hard to hear the people being interviewed on occasion but still a good watch. I think all conspiracies have some truth but this is definitely one of the ones that rings close to 100% truth. Does anyone seem to care though? Not really, it is mostly unknown history now.


Pell allowed these men to roam and graze freely on the children at Catholic schools....

This sentence gave me the shivers...

posted on May, 4 2016 @ 05:17 PM
link
I value the OP's link to the Franklin affair, though the book is much
better and documents dates and details to validate everything. To
help those understand SRA is still an ongoing issue please read the
material on itccs.org...
(International Tribunal into Crimes of Church and State)

The website details hundreds of past and present cases, but most
notably the trial which started on April 7th 2016, against Pope Francis,
and the Jesuits and other complicit actors in a conspiracy of mass
proportions involving Child abuse.

Some people blinked after former Speaker of the House Dennis Hastert was
sentenced to prison last month for past child molestation. Many were
outraged so many powerful politicians came to Mr Hastert
defense, and that he only received a 15 month sentence. Unfortunately most
are still uninformed that the American political and judicial landscape is rampant
with pedophilia. Over the years there's been dozens of such cases, but the active
memory of many is sadly repressed by other trivial media stories...
Stories such as "What Are The Kardashians Having For Breakfast?".

Members of secret societies are obligated under oath to
help a fellow brother in need. If people understood the spiritual dynamics within
the inner circle of those ruling secret societies the light would eventually come on.