You may recall that last year was the hottest on record for the globe. And by NASA’s accounting, it ended with a bang. This past December was the warmest December on record and the most abnormally warm month on record, too.

That is until now.

The really frustrating thing about climate change is we've known for years how to solve it (cheaply). We've also known that the longer we wait to do so, the more expensive it will be.

The consensus among economists on carbon taxes is similar to the consensus among climatologists that human activity is responsible for global warming. Putting the price "upstream" where the fossil fuels enter the market makes it simple, easily enforceable, and bureaucratically lean (and also offsets any regressive effects of the tax).

Conservative estimates are that failing to mitigate climate change will cost us 10% of GDP over 50 years. In contrast, carbon taxes may actually boost GDP, if the revenue is used to offset other (distortionary) taxes or even just returned as an equitable dividend (the poor tend to spend money when they've got it, which boosts economic growth).

It's really just not smart to not take this simple action.

This isn't a new phenomenon either, there was a malicious move for short term profits that intentionally ignored established facts.

Some people want to believe it's some nonsense about Agenda 21 and national sovereignty. Never mind that in 30 years when starvation kills half the planet and wars over clean water start up.

Away with your carbon credit scam!

Life tends to thrive in warmer climates, why should change be feared?
edit on 17-2-2016 by GodEmperor because: edit

Life tends to thrive in warmer climates, why should change be feared?

Because they think 1955 was earths optimum temp, and any deviation means that evil man caused it and taxing US into starvation and stone aged living conditions is the only cure...

posted on Feb, 17 2016 @ 09:16 PM
link
Yeah, it's so weird. We've had record breaking cold this Feb. Weird. Weird I say. This climate change or record breaking temps on both sides of the mercury point is so....so....so.....weird. I'm pretty sure it's called weather. Something that has been happening for hundred of thousands of years or more. So weird. Shakes head.

Why does every solution for climate change have to cost money?

Because that's the solution to the created thesis and created anti-thesis.

Life tends to thrive in warmer climates, why should change be feared?

Ocean acidification is one reason. There are numerous other reasons; droughts and heat waves, changing patterns of precipitation, significant ice cap melting (150,000 penguins were missing after an iceberg the size of the state of Rhode Island cut them off from the ocean).

I could list pages and pages of data showing the consequences of climate change and its detrimental affects on the planet. That's been done too many times on this site though. If you don't believe in it, that's not my fault. Not only did we have the warmest year on record, but we seem to now be breaking records on a monthly basis. It's disturbing and alarming and we really shouldn't even be arguing about it anymore.

originally posted by: DBCowboy
Why does every solution for climate change have to cost money?

The government spends billions on idiotic things on a daily basis.

Yet, according to government, man made climate change is going to destroy us all, and they won't spend a dime until they raise taxes.

All this tells me is that its a scam.

posted on Feb, 17 2016 @ 09:48 PM
link
a reply to: links234
Good luck trying to have an intellectual discussion on this serious issue. A lot of interests will troll threads like this to prevent a productive conversation, and many useful idiots will act as cheerleaders proclaiming climate change is natural, thus there is nothing we can do about it.

Obviously as a result of our addiction to fossil fuels, we are disrupting the climate.

Ending our addiction to fossil fuels is a practical solution.

If man made climate change is real and it can be fixed, fix it!

The US spent trillions just on wars in just the past few years.

Are you telling me that to fix it, it'd cost more than that?

originally posted by: jrod
Ending our addiction to fossil fuels is a practical solution.

You and I have differing definitions of 'practical'.

While this thread may well see posts from people who believe that because it was cold or snowy by them, the actual measurements aren't true (yes, those people actually exist), I am a believer in climate change/global warming - because I'm literate.

That said, I do not believe for a second that carbon taxes will do a lick of good, and I think they're a terrible idea which will be abused. I also think carbon dioxide is a drop in the bucket compared to methane releases, and that while we should continue to advance and move toward "clean" energy technologies, we should be more focused on how we're going to adjust to warmer temperatures and changing precipitation patterns.

It's more important to focus on such things as developing desalination technologies for water/irrigation, efficient farming techniques such as aquaponics and community/homestead gardens. For those areas which will end up under water, they should be figuring out what to do about it. Do they abandon coastal areas and move inland? Build levees? If things are as urgent as they are claimed to be by scientists, IMO, cutting carbon emissions is noble and important, but it's a long term secondary priority to figuring out how to face what's happening. If the world stopped burning oil and coal tomorrow, it would still be a looong time before carbon dioxide levels returned to pre-industrial levels.
edit on 2/17/2016 by dogstar23 because: Swypo

posted on Feb, 17 2016 @ 10:54 PM
link
The climate is always changing, we can't predict the weather two weeks from now. The government is trying to use climate change for a new source of revenue, they also want more control over our daily lives. I'm still waiting for an answer on how does adding a climate change tax on 300 million Americans do anything, when billions in China/India don't care what they do to this planet. Have you seen the pollution in China air/rivers/streams, what about the pollution in India rivers/streams.

I have no problems with states wanting to raise the bar over time by requiring higher energy efficient appliances/HAVC systems in our homes. When we replaced our HAVC system last year, our old furnace was only had 80% Efficiency, our new one is 95% Efficiency. Our Central air conditioner has a SEER rating of 16. We ended up receiving $700 in rebate/tax credit for going with a high-efficiency furnace.

originally posted by: DBCowboy
a reply to: jrod

If man made climate change is real and it can be fixed, fix it!

The US spent trillions just on wars in just the past few years.

Are you telling me that to fix it, it'd cost more than that?

The way to fix it is to stop emitting carbon dioxide and other greenhouse gases.

If you can see a way to do that easily, I'm sure people would be all ears.

I do not necessarily support any sort of tax to disincentivize it - that's how economists suggest slowly weaning ourselves off of fossil fuels. What we need is a rapid drop in emissions.

originally posted by: onequestion
Since the Roman warming period? 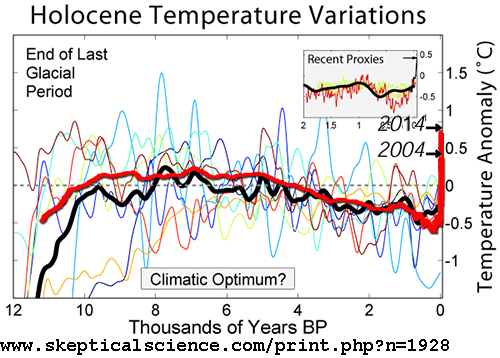 Lemme just stop you right there. The Earth is faaaaaaaar older than recorded history, and most definitely older than recorded weather/climate data. Its bad scientific practice to call something proven before you've collected all the data. On the matter of climate, yea you can point to a pattern or trend and suggest that something is wrong, but its meaningless if you're only comparing it to the last 100-150 years of data. Gotta remember that there've been multiple ice ages (an example of climate change) long before the first v8 SUV rolled of the assembly line.


originally posted by: onequestion
Since the Roman warming period?

I hate when there's big ole mspaint lines drawn on graphs, makes it hard to see that real data