posted on Feb, 10 2016 @ 11:08 AM
link
A Trump supporter held that sign up, and very briefly you saw it as Trump went to the podium last night to give his victory speech
It was small sign TRUMP4TRUTH did anybody else on ATS see it?


Please skip to 1:42 (Hour and 42 minutes)it's really long boring video but you can see what I am talking about there.

I specifically asked the ownership of ATS to make this thread and post it in the 9/11 forums but sadly it is effectively shut down.

But this is too important to ATS to not discuss. Last week I began to think about if Trump wins the nomination and presidency, if he comes into classified information about 9/11, he is the type of guy that would be super angry if he found out it was a false flag. This was his city after all.
He unbelievably might decide it's time for a new investigation into 9/11 wanting to jail and prosecute the domestic people responsible for this. I also found it strange that Alex Jones supports him, could it be he too think Trump could look into this.
I would love somebody to ask him the question publicly, to here his answer.

So this can be left here or moved to the 9/11 forums I leave it up the moderators .

I don't see it at your time stamp.

I believe it refers to this:

posted on Feb, 10 2016 @ 11:33 AM
link
Unfortunately if trump or sanders are victorious and decided to look deeper for some answers we may be looking at assassination.
I think most of us know where the truth will bring us regarding 9/11 and those responsible will do anything necessary to stop the truth coming out.

Interesting could be.
I would have liked to ask the person holding that sign exactly what his point was.

There VP must be equally committed to it then, if they were both taken out, then America would know for sure, as never in the history have both been assassinated.

The sign seems to be working if it has at least us talking about it.

I did not notice that, but i noticed a guy holding a photo of ronald regan just before trump said that he would build a gigantic wall, the irony is regans speach in berlin where he shouted gorbachev TEAR DOWN THIS WALL!! i can swear that in that moment i heard homer simpson shout DOH! what a utter bafoon!

posted on Feb, 11 2016 @ 07:53 AM
link
Until Trump proves himself to be an enemy I'm all in for Trump. Sick of lawyers like Obama, Cruz, Clinton who say the right things but do the wrong things.

Somehow I missed this when it first came out, this is a big deal, and I believe him when he said he will, New York is his baby, he wants justice for it.

I'm surprised he isn't making more noise about this during debates and such.

More than half the people dont believe the government story, so surely it would be a positive to push this

posted on Feb, 15 2016 @ 09:41 AM
link
Trump sensing victory goes for the jugular of the Bush's, SC used to Bush's path to victory, it looks like they are reaping what they sowed with their annihilation there, this round. 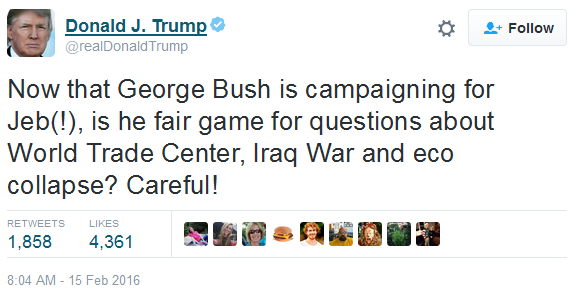 lets some some cutting questions donald!