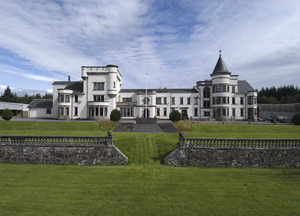 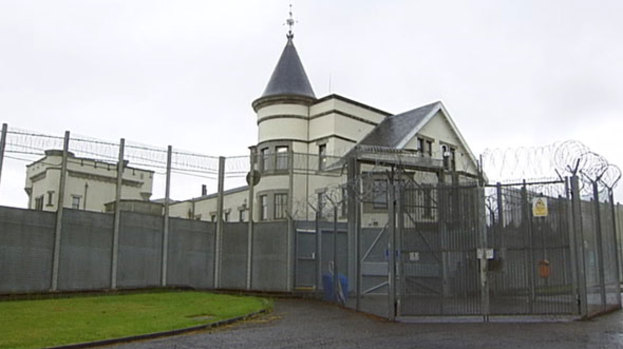 . . . providing custody, escorting and offender management services to Governments around the world.

. . . women are also detained in Dungavel.

Their situation is a cause for concern. There are just 14 bed spaces for women compared to 235 for men. Over the years that we have visited, it has not been unusual for just one or two women to be resident in the centre. This can be particularly isolating and frightening. In a film made by SDV, one woman who had been detained there described it as being “like a chicken surrounded by dogs”. A former detainee recently told me of his disquiet that women were detained in such an environment. He said unwanted attention and remarks from male detainees were commonplace.

"Stalked by trees along disorientating roads, one might be forgiven for believing they were firmly fixed into the opening scene of Stanley Kubrick’s The Shining when approaching Scotland’s only Immigration Removal Centre (IRC)."
www.law.ox.ac.uk...

The same writer is a little less clear about the number of women detained here.
"The centre holds 249 male and female detainees at any one time."

"The Corporate Watch investigation has found that the most prolific employer of detainee labour is GEO. A subsidiary of this American prison company runs two detention centres in the UK: Harmondsworth, outside Heathrow Airport, the largest site in the country with 661 beds, and the smaller 217-bed Dungavel centre in Scotland. GEO's detainees worked 22,506 hours in May 2014, according to management data obtained by Corporate Watch. They received £22,987 in pay."
corporatewatch.org...

Generally a positive report. Here are some results from a questionnaire giving a partial view.

Communication problems are common. Being detained here without understanding why or what's going on must be very unsettling and likely to lead to conflict.

"The centre held more people who had committed violent and other serious offences than at the time of the previous full inspection."

"There were few single or double rooms for men, and none for women. Many detainees said that their dormitory rooms were not quiet enough to sleep at night."

I don't know what to think about this place.
I'm looking forward to your input.
edit on 7 2 2016 by Kester because: (no reason given)

Originally a 19th-century hunting lodge and summer retreat of the Dukes of Hamilton linked to their then main house at Hamilton Palace, it was the home of the 13th Duke from 1919 following the demolition of the palace due to subsidence, arising from mining in the area.

Dungavel was the planned destination for Rudolf Hess's doomed 1941 peace mission, to seek the intercession of the 14th Duke of Hamilton with Churchill to try to end the war between Britain and Germany. Dungavel was sold on to the National Coal Board in 1947. It was then acquired by the government and turned into an open prison. In 2001 its role changed and it is used for holding asylum seekers whose applications have been refused prior to their removal. It however, remains the final resting place for the thirteenth Duke of Hamilton, a naval officer whose grave lies within the close policies of the castle, once adorned with a ship's anchor.

On May 10, 1941, 17:45 Middle European Time (MET), Rudolf Hess took off from Augsburg, Bavaria, in an unarmed aircraft, dressed as a Luftwaffe pilot. His aircraft was a heavy fighter-bomber: Messerschmitt 110 E-1/N, serial/works number 3869, radio code VJ+OQ, equipped with two additional drop-in fuel tanks which extended its operational range to 4,200 km or 10 flying hours. With a wingspan of 53 feet, length of 40 feet, operational ceiling of 34,000 feet, and two Daimler-Benz engines totalling 1,400 HP, the Me 110 had a cruising speed of 420 kph. Just after 22:00, Hess crossed the British coast at Farne Island, and by 23:00 believed he had reached Dungavel House, home of the Duke of Hamilton. At 23:09, unable to locate the landing strip at Dungavel, he bailed out of his aircraft and parachuted into a field at Floors Farm, Eaglesham. Having injured his ankle as he left the aircraft, he was quickly taken prisoner by the farmer, alerted to his presence by the crashing aircraft.

British records of the event are currently sealed until 2017

Not long to wait now then eh? The history of the place is more interesting than its current use

posted on Feb, 7 2016 @ 06:05 AM
link
I guess those that have had asylum applications rejected have to be detained somewhere, but it should be a very short stay before they are taken back home.

I am not sure about them having to undertake work, but then again you look at the organisation entrusted to run the facility and all becomes clear. Follow the same business plan as you have in the U.S and a few people become very rich off the scheme.

The statistics provided relating to inmates experience isn't too bad, but why are they detaining violent people there? If they have committed a crime, then they should be held in one of H.M Prisons.

originally posted by: Cobaltic1978
The statistics provided relating to inmates experience isn't too bad, but why are they detaining violent people there? If they have committed a crime, then they should be held in one of H.M Prisons.

More likely than not, they are convicted offenders who have completed their prison sentence. Instead of being released back into the community at the end of the sentence, they are moved to a holding location (ie the place in the OP) prior to deportation. Because the sentence has ended, they can't be detained in HMP locations.

They should be deported on release from prison. After all the authorities would have had enough time to make the arrangements whilst they were serving their time.

But then again, if you can get away with paying around £1.00 an hour for Labour costs, then who's in any hurry?

. . . some interesting roles were available, such as barbering, most
of the jobs were routine cleaning roles and few had relevance to skills that would be of use
in destination countries. There was a long waiting list for allocation to a work role.

I've lost the link where GEO put a positive spin on paying £1 per hour. It's all too slow and disorganised with many opportunities to profit from making it slower.

They should be deported on release from prison. After all the authorities would have had enough time to make the arrangements whilst they were serving their time.

But then again, if you can get away with paying around £1.00 an hour for Labour costs, then who's in any hurry?

Nah, they all have human rights, apart from us born here. Take Hamza's daughter in law for instance .... NOW, why was that kept secret for so long? why the secrecy at all?

posted on Feb, 7 2016 @ 07:02 AM
link
Dungavel isn't remote : it's just up the road from me.
It was previously a low security prison for minor offenders. It's much more secure now.

I don't suppose there's ever a nice way to throw people out of your country, especially if it involves children.
Bottom line is, though, that many people who claim asylum for persecution are liars and they only come here for economic reasons. Natural enough, wanting to better yourself and your children ... but hey, do it in your own country and at your own expense.

Dungavel isn't particularly sinister tbh, no matter what the Scottish Government might claim.

The Hess connection is probably irrelevant, but you never know. First seen flying at fifty feet in the dark. Climbed to 6,000 feet, then jumped out to negotiate the end of the slaughter. Cool.

There's been a spate of 'what's the point?' comments. I can only quote the overseers.

. . . discussion board community dedicated to the intelligent exchange of ideas and debate . . .

. . . an effort to apply the principals of critical thought and peer review . . .

I did state that the history was more interesting than its current use, so could be relevant if you are interested in such things, i also did respond to the OP regarding the stats quoted, like ........ its bleeding obvious that the majority are male and non christian ...... they are asylum seekers for christ's sake (no pun intended) and the majority of those come from non christian nations and tend to be male!!

PLUS, the OP does not ask any specific question so no debate / answer etc necessary, unless i missed something?

I do not think I could have arrived at my final choice unless I had continually kept before my eyes the vision of an endless line of children's coffins with weeping mothers behind them, both English and German, and another line of coffins of mothers with mourning children."
Rudolf Hess (June 10, 1941)

He knew what was most important. We should too, and put the moneymaking aside.

After reading this thread it's possible someone might recognise the difficulties faced by detainees and begin visiting.

"Because Dungavel is difficult to get to by public transport, we drive there. We always travel in a group of people so not every visitor needs to be a driver. Visiting in groups also means that as a new visitor, you’re always supported by our experienced team.

It takes roughly 50 minutes to get there from central Glasgow so we leave at 6pm. Visits happen on Monday and Thursday evenings from approximately 7:00 – 8:30pm. However, you’ll only need to commit to visiting two times per month. Of course if you want to visit more, just let us know." sdv.org.uk...

An input from an experienced visitor would enlighten us here on ATS.

14% have come direct from prison. That would be of interest to a visitor. Drama has been found to be very useful in turning people from crime. There is a particular technique that is notably successful.

The system needs a shake-up. It looks more than likely the system is being run at a ridiculously slow rate to maximise profits. I suggest replacing half the staff with clowns and mime artists.

I don't see what else you can do with failed asylum seekers because you can't have them trotting around in the normal public because they would disappear.

What annoys me is that the two places offering this facility are American run and I suspect they are minting it off the tax payers.

Once someone's failed to be granted asylum they should really be on the next plane out. But its typical of our lawmakers to have provided a legal loop holes that allows our legal industry to earn legal aid off the public purse trying to keep these people here so they can appeal.

Its a shame and quite unnecessary that they got in here in the first place. If these people had to apply at one of our consulates in their country of origin or a country next door to their homeland and were vetted there, it would save us a hell of a lot wastage of public funds that could go to improving our dire infrastructure and institutes all cash starved.

Our current system has failed as the EU is now able to testify to quite merrily.

The system long ago failed in the US. Here we have a catch and release system. Even if they commit crimes, they're simply deported back to Mexico and 6 weeks later...........back they come to commit more crimes. To make matters worse, there's been a story out that the Border Patrol/Immigration Services have been told to simply release them without a hearing date because the administration is embarrassed by the fact that only 50% ever show up to the scheduled hearings to review and assign refugee status AND the border patrol has been told to not track these people if they "say" they've been in the country since January 2014. According to statistics reported today, 14.5% of the US population of 350 Million is foreign born immigrants........that's 49 million people according to my calculator.