The Age And Origin of Fairy Tales: “a tale as old as time.”

page: 1
25
<<   2 >>
log in
join
share:
Ghost147
+2 more
posted on Jan, 22 2016 @ 09:36 AM
link
There recently was a very interesting article posted on www.sciencenews.org about new research which has been able to tie several of the oldest written Fairy Tales to where their origins may have been. 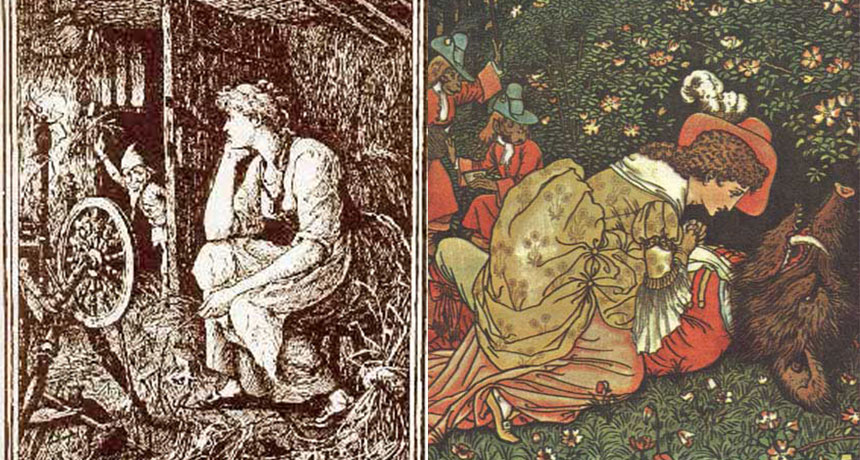 Statistical ties between a set of folktales and languages from parts of Europe and Asia have helped researchers date the origins of some stories to thousands of years ago. The roots of the oldest one — a folktale called “The Smith and the Devil” — stretch back to the Bronze Age. The findings, reported January 20 in Royal Society Open Science, may dispel the thought that some well-known folktales such as “Rumpelstiltskin” and “Beauty and the Beast” are recent inventions.

“These stories are far older than the first literary evidence for them,” says coauthor Jamie Tehrani, an anthropologist at Durham University in England.

When linguists study a language’s evolution, they trace grammatical and phonetical structure through time. “What we were interested in doing is seeing if you could do that for other elements of culture,” Tehrani says. 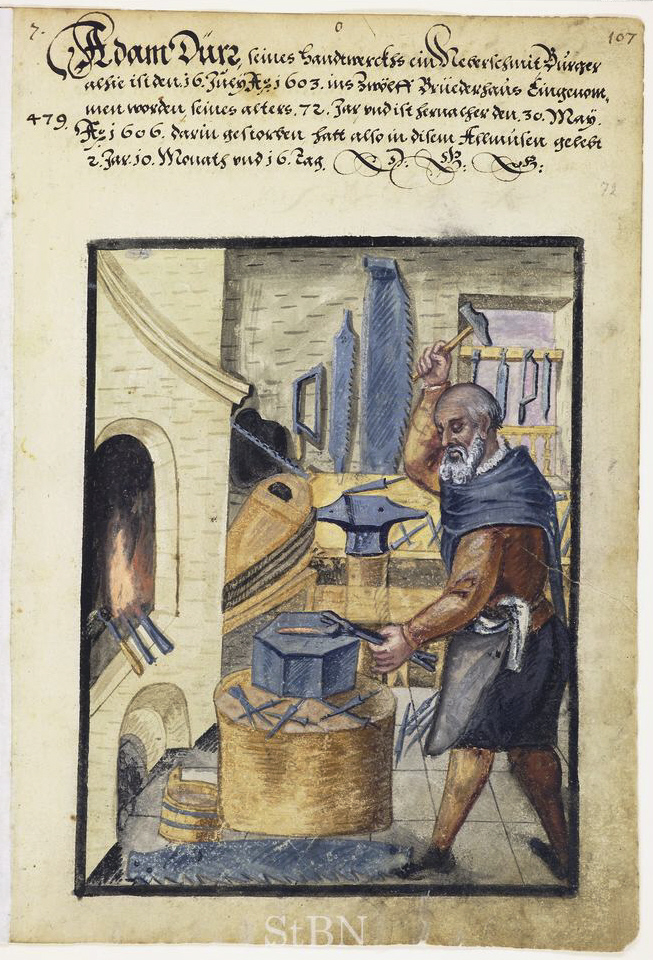 Four tales had a high probability of being associated with the structure of the Proto-Indo-European language — an ancient common language that dates to around 6,000 years ago and is a precursor to such language families as Romance and Germanic. Only one tale held up to the strictest statistical scrutiny, though.

“‘The Smith and the Devil’ is the one we feel absolutely confident as being a Proto-Indo-European tale,” Tehrani says.

The story is about a blacksmith who makes a deal with an evil supernatural being for the power to weld any material together. Since the tale is associated with Proto-Indo-European language and includes a character who typically works with metal, the researchers park its origins around 6,000 years ago, in the Bronze Age.

Although religion and mythology stems back far longer than fairy tales, it's interesting to see where some of the first, and long-lived, ones could have originated from. It's quite amazing just how long some of these have lasted.

posted on Jan, 22 2016 @ 09:40 AM
link
I remember reading that the story of Cinderella has its roots in Ancient Egypt. Imagine if someone from that period lived long enough to see it transform into a Disney movie. That would be something.

posted on Jan, 22 2016 @ 09:47 AM
link
I have always found fairy tales to hold important information/lessons to be learned, perhaps an evolutionary step from verbal tales and song.

From your link, it appears another folklorist disagrees with this assessment.


Not everyone is convinced. John Lindow, a folklorist at the University of California, Berkeley, notes that the Proto-Indo-European vocabulary for working with metal was limited and the word smith might not have existed. If true, that would mean the version of “The Smith and the Devil” used in the study may not be that old, he says.

posted on Jan, 22 2016 @ 09:53 AM
link
World history has alway been about kings and royalty lording it over the masses. Deceiving and Enslaving them, stripping them of their wealth, using that to wage endless war out of spite with other king-dumbs.

If these tales about princesses and armaments are popular its because of the common thread running through history.

Thats supposed to wake us up.

Making weapons of war is the devils work.

posted on Jan, 22 2016 @ 10:18 AM
link
Such studies are very interesting, but difficult to validate. Right now all fairy tales, collected by the brothers Grimm, have gone around the globe a few times, Disney trivialzed them and every time I put on the tv I see a serial or a movie where the protagonist of an old fairy tale is fighting with vampires or with werewolfs, even the brothers Grimm themselves.

If we should be able to trace the tales back to their origin or at least somewhere near, then maybe we are the last ones who have a chance. I guess, next Red Riding Hood lives on Mars and fights Giger's aliens and Rumpelstilzken is the master of a parallel universe.

But that's okay. Every generation tells the stories in their way.

originally posted by: Siddharta
Next Red Riding Hood lives on Mars and fights Giger's aliens and Rumpelstilzken is the master of a parallel universe.

Whoa, at least write "Spoilers" when you're revealing the plot to the next Guardians of the Galaxy movie.
edit on 22/1/16 by Ghost147 because: typo

originally posted by: Teddy916
I remember reading that the story of Cinderella has its roots in Ancient Egypt. Imagine if someone from that period lived long enough to see it transform into a Disney movie. That would be something.


Your own link says it's Greek.

Wow just yesterday I found this on Youtube and thanks Teddy916 I didn't know of any connection of Cinderella root's in Ancient Egypt.
edit on 22-1-2016 by Spider879 because: (no reason given)

Me either! Wow.. . Cinderella tied to ancient Egypt ...who'dda thunk it??

**That was just to annoy Harte

It is from Greece, actually... also according to Harte's reading comprehension skills!

Haha! It is difficult not to spoil the next movie or novel of some people, since they are all the same anyway.
Since Josh Weddon's "Buffy, the vampire slayer" sooner or later everyone has to fight against Dracula & Co.

But to get back to your thread theme: It surely is very interesting to follow the traces back. The same for all those myths and legends. When in Ireland lately, I learned that a legend of a battle at Dublin was also famous in many legends of the Northern countries. The same is true for the Rhinegold Saga, which has it's variations all over the north.

A recommendation for those who are interested in this saga: Stephan Grundy wrote a great novel ("Rhinegold") as a young man, still studying himself during that time. Published 1992, when he was just in his mid-20th. Werewolves included, but no vampires, because Graf Dracula lived a little later.

posted on Jan, 22 2016 @ 10:59 AM
link
Old fairy tales have been around for more years then what we thought.
How long they have been around isn't as important as the life lessons
we may learn from them.
Guardians' of the Galaxy is one of my favorite movies,I really liked that
raccoon and the older music they played.

posted on Jan, 22 2016 @ 11:01 AM
link
Because it's so difficult to validate, I'm a little suspicious of this. While can believe that fairy tales and myths are old, I'm not sure that the method of testing is valid - and I don't think you can really trace them back to any proposed prehistoric language.

However, I think parents and grandparents have been telling fairy tales to children ever since language began and storytellers have been making and modifying and sharing the myths ever since time began.

posted on Jan, 22 2016 @ 11:06 AM
link
A bit more intangible 'evidence' akin to the dialogue we exchanged in our last board encounter. I had been toying with the idea of putting up a thread on Fairies and those things that dwell just on the other side of the veil.

originally posted by: Baddogma
a reply to: Spider879

Me either! Wow.. . Cinderella tied to ancient Egypt ...who'dda thunk it??

**That was just to annoy Harte

It is from Greece, actually... also according to Harte's reading comprehension skills!


Although I am astonishingly literate, reading the wiki article that was linked didn't require me to flex my literacy superpowers.

It mentions hetaerae. That's Greek for whores. Tells you a little about me, but I sacrifice the info to get a grin.

originally posted by: Siddharta
a reply to: Ghost147

Haha! It is difficult not to spoil the next movie or novel of some people, since they are all the same anyway.
Since Josh Weddon's "Buffy, the vampire slayer" sooner or later everyone has to fight against Dracula & Co.

Doctor Strange did it before Buffy. He was a trend-setter then.

Honestly, I hadn't an inkling that you were a Greek whore... but I know something of sacrifices for cheap grins, myself.