Sarah Palin addressed the “elephant in the room” at a Tulsa, Oklahoma, rally for Donald Trump on Wednesday, linking her son Track’s recent arrest on domestic violence charges to President Barack Obama’s neglect of veterans.

There is a special kind of hubris that leads you to blame your own problems on others. In Sarah Palin's case, she wants to blame Obama for her son's domestic violence arrest. Her family claims it is due to PTSD, from his brief stint in the military. According to the military, he never saw combat, and was never awarded the Combat Infantryman Badge (CIB) (link to his DD214) Track Palin: 5 Fast Facts You Need to Know Does he in fact suffer PTSD or is this another round of excuse-making? Then again, growing up in that household probably could give you PTSD...

It seems once again, Sarah Palin is politicizing her son's military career.

vonclod
+20 more
posted on Jan, 21 2016 @ 02:28 PM
link
This is Palin going "full retard" one should never go full retard, better to close your mouth and appear stupid than open it and remove all doubt.

Doesn't she gets enough money in Alaska due to her ties to big oil companies to make sure her son gets the treatment it needs, or she rather have the tax payer to pay for it, what a joke, very soon she will have him disable and on SS.

Did Obama learn his lesson from that same speech?

conspiracy nut
+9 more
posted on Jan, 21 2016 @ 02:31 PM
link
i don't think that peoples children should be dragged through the mud but palin is bringing this on herself. she probably should have kept her mouth shut on this one as her family has quite a few errors in judgement over the years that could be brought up and thrown in her face. where's the popcorn, this is going to get interesting!!!

originally posted by: PresidentCamacho
This is Palins version of Obama's "If I had a son" speech.

Trump doubled down on this, the irony is strong that they want to shift the blame.

Remember Miley Cyrus was Hannah Montana when Bush was president,
thanks Obama.


amazing
+23 more
posted on Jan, 21 2016 @ 02:37 PM
link
This is ridiculous. The first thing that most republicans on ATS will tell you is that you should be responsible for yourself and your actions. Tell me again why anyone would listen to Sarah Palin? LOL

I'm a big fan of Palin. I like her because she pisses so many off.

But even I think that is over-the-top.

I can't defend this one. I say someone go shewt her.

Just for the record, I do not endorse nor would I encourage anyone to shewt anyone. It was a joke.

This isn't about Obama..he is no hero to me but at the same time he is not responsible for all the worlds ills, did he learn..I doubt it but Im not sure the 2 are quite the same.

It is now 2016, many women on the right are standing tall, Carly, Condy, etc..and yes, we still say Palin was and is still a idiot.
Now
Lets have a soldier weigh in on the latest from the wackjob: 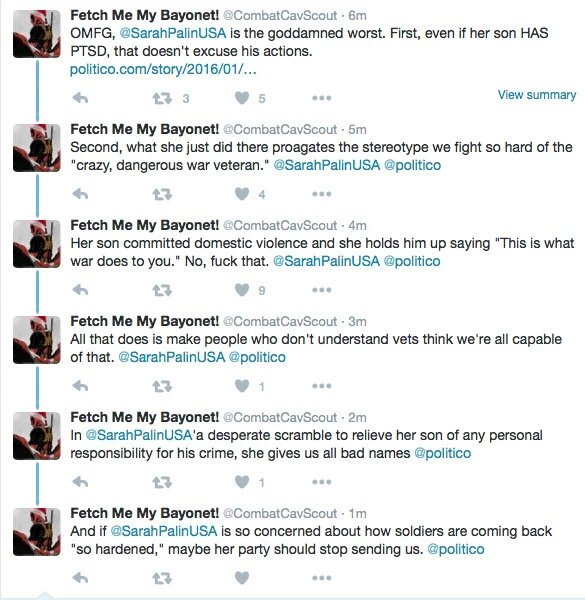 Of course she lays the blame at Obama's door, everything is Bammy's fault, never Palin's, including the 2008 election.

The woman is toxic, how can anybody take Trump seriously when he has to bring out this Poison?

Didn't he serve for less then four years and spent his time as a driver for people on bases?

blackthorne
+1 more
posted on Jan, 21 2016 @ 02:54 PM
link
damn it obama! why did you have to travel to alaska, get him drunk, punch track's girlfriend in the face and then hold a gun on him? and why did you have to go and impregnate bristol, twice, out of wed lock?

btw, according to track's DD214 he has none of the corresponding awards that would show that he was in combat. apparently, all he did was drive his commanding officer around. so, what p.t.s.d. are we talking about?

for the record, i served 8.5 years in the navy. 4 on the u.s.s. nimitz. never saw combat, ut did fight 2 fires on board her. the big one on 30 nov 88 when a n airman was working on the now decommissioned A7 corsair and accidentally fired into the alert 15 air refueling tanker. we lost 7 planes and 2 men. the other fire was while she was in dry dock. just a head (bathroom) that had it;s insulation catch fire due to a welder's torch.

olaru12
+2 more
posted on Jan, 21 2016 @ 02:57 PM
link
I wonder if Palin is even aware of the GOP Republican mantras of "take personal responsibility" "family values" etc.
The only thing I can think of is that people who respect Palin don't have very good powers of discernment either and just adopt any corny phrase to throw up at progressives and not even see their hypocrisy.

The Republicans still seem to think that Negative campaigning is a viable strategy. Trump is using it and has established a base of Palinesque followers but it still won't get him the gop nomination. Trump will soon play the Trump card and leave a bunch of people looking stupid with their mouths hanging open....all chumped out!!!