This time it's from an Oregon State Senator (who also doubles as a prosecutor in his home area) and some other Oregon legislators.

They want to somehow declare a "mental health emergency” as reason to hold off somebody from buying a gun !!!

And if that's not enough, they want the "mental health emergency” victim to pay for a doctor's evaluation to get them "un-certified" !!!!

? Maybe the legislators are the ones with a "mental health emergency” ?


Leonid Brezhnev would be proud of Floyd Prozanski, Oregon’s leading anti gun state senator. Not content with passing the grandiose “universal background check” bill last year that was supposed to solve all of the world’s problems, Prozanski has now introduced a bill that would allow people to declare someone to be having a “mental health emergency”, which would result in a 30 day “hold” being placed on the accused’s ability to purchase a firearm. The accused would not even know they are on the no-buy list, as they would not be informed of the accusation unless they tried to purchase a firearm and go through the background check process. The accuser’s name would not be available to the accused. Worse yet, “mental health emergency” is not defined, and is largely arbitrary.

LC 250 was formally introduced on Friday, January 15th. The bill is officially sponsored by the entire Senate judiciary committee, which Prozansky chairs, because the legislators themselves are limited 2 bills each for the upcoming short, 35 day session. By introducing it as a “committee” sponsored bill, the party in control can use this as a loophole to introduce however many bills they want.

Strange leaves fall from some trees.

Really, who didn't see this coming.

They are giving two choices;

Everyone knows they can't pass a law that enforces banning 'assault' rifles. There are too many people that will object.

But, BUT...limiting those that aren't 'mentally' capable of being a responsible gun owner....well now. The populace would agree that we don't want psychos having firearms..... (insert a genetic label here, etc 'aspergers')

Just one Itty bitty problem, the goverment gets to decide who is mentally capable and who is not.

3. Leave the second amendment alone! If Libs are so concerned about 'gun violence' they would place their efforts on preventing suicides by firearms which make up nearly 2/3rd of 'gun violence'

They know that they dont have the votes to get anti-2A legislation thru on the federal level, so they are activating their minions on the state level.

Look, no one, not even the pro-2A crowd, likes violence. All forms of violence, whether a firearm is involved or not, are deplorable.

"Those who would give up essential Liberty, to purchase a little temporary Safety, deserve neither Liberty nor Safety."


The anti-2A crowd will respond with, this is nothing more than (wait for it), "common sense" legislation.

Actually no, its not. It gives one person the ability to strip you of your rights. In this case, the fundamental right of self protection.

But more than that, its incrementalism. The ultimate goal being the disarmament of the American people. But its for our own safety, right? I dont think so. I truly feel that governments (in general) fear an armed public.

If government was sincerely concerned about our safety and well being, there are plenty of other causes which should be a priority: 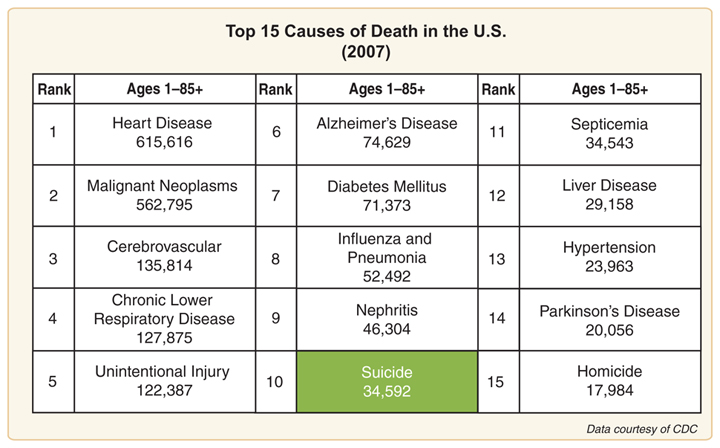 But all you pro-2A peeps are just a bunch of paranoid, toothless, Bible thumping, hicks without any basis for your gun confiscation delusions...

posted on Jan, 18 2016 @ 09:27 PM
link
Just like legalising marijuana in one state, its to be expected that every other state will fall into line.
States that dont, get sanctioned

Really, who didn't see this coming.

They are giving two choices;

Everyone knows they can't pass a law that enforces banning assault rifles. There are too many people that will object.

But, BUT...limiting those that aren't 'mentally' capable of being a responsible gun owner....well now. The populace would agree that we don't want psychos having firearms..... (insert a genetic label here, etc 'aspergers')

Just one Itty bitty problem, the goverment gets to decide who is mentally capable and who is not.

I can assault not only you, but anyone with the keypad on my phone in seconds.

Rifles should never be classified as an 'assault' weapon. 'Defense' or 'sporting' rifle is more accurate and makes more sense.

Rifles should never be classified as an 'assault' weapon. 'Defense' or 'sporting' rifle is more accurate and makes more sense.


Please believe me, sir,
I get what your doing by typing it the way you do.

You, amongst others on here, spread it like cancer.

Sometimes you can cut cancer out.

But the ' ', and putting the assault in between can be cut out EVERY TIME.

By sporting rifle.... did you mean assault rifle?

I concede. Thank you for the proper correction.

By sporting rifle.... did you mean assault rifle?

Rossi DEMANDS respect.
Will you give it to him?

If Rossi wants respect, he has to stop kicking other riders. Even if it was Marquez

So in Oregon with this bill all the legal gun owners will become mentally ill, interesting.

Secondly, I wish these twats would stop crying me a river over gun control. I am personally against its existence within the US due to extraneous factors, but people need to take the energy they put into protecting the precious second amendment and claim back the fourth.

What we need are mandatory primary school classes on gun safety and respect. While that will not reduce the sky-high intentional homicide rates, it will decrease the amount of accidental deaths.

You are confusing law following Citizens with criminals.

No where in that article did I read "one man carry's the gun, his comrade carries the bullets. When one man dies, the comrade collects his rifle."

I fail to draw your "soviet" connection.

You are confusing law following Citizens with criminals.

What? No I'm not. I specifically pointed out that a primary school gun class wouldn't reduce homicide rates. The point of what I sugggested is to curb accidental deaths.

Some people think anything they personally believe is bad is Soviet/Communist/Socialist/Left, probably best to ignore it.

I'm actually a bit iffy about this legislation though. Fear-mongering aside, badly written things such as this are rife for abuse.
edit on 19/1/2016 by Eilasvaleleyn because: Reasons

posted on Jan, 19 2016 @ 06:45 AM
link
As far as I know, many Soviet citizens had guns in their homes; just for different reasons than what most Americans today have a gun in their home.

This bill could be a good one if it is tightened up a bit more. `mental health emergency` really needs to be defined clearly enough so a medical professional could confirm that it`s an actual mental health emergency. As soon as the person is accused the state should be required to pay for a full mental health evaluation by a doctor of the accused choice. Also, if someone ends up on this list I think it would be a good idea for the person to be checked on my social workers at the very least. You know, just to make sure the person in question is doing alright. The part about requiring someone to pay to get an evaluation to get off the list is just a expression of the state of health care in America. Having full universal healthcare for all US citizens would solve a lot of the cost with mental health evaluations.

Overall, it`s a good idea to keep crazy people from doing something crazy and shooting a boat load of people all because they are mentally unstable. So, many cases of this happening in America these days.

The issue is, like the TPP, how broad and easy to abuse it is.