Jurgen Klopp , a Breath of Fresh air for the Premier league ?

posted on Jan, 9 2016 @ 04:42 AM
link
I hadn't heard of Jurgen Klopp before he joined Liverpool but all the talk when he was linked to the club was about his charisma and what a nice chap he is , all very well but Jose Mourinho was charismatic but I found him to have an equal measure of arrogance.

I've seen pre and post match interview with Klopp and admit he is a guy with some charisma about him but after watching the Exeter vs Liverpool match last night and the post and pre match interviews it struck me just how laid back he is , these interviews to me are a refreshing change from the normal Premier league manager interviews and show a man who I could happily have a beer with.


Answering my own question , yes I think he is a breath of air for the Premier league and long may he continue.

Comes across as a genuine guy doesn't he? First time in a long while there has been a Liverpool manager who makes you smile.

I would imagine that behind the scenes he has a considerably darker side when he has a bee in his bonnet.

Hopefully great things will come of his time at Anfield

posted on Jan, 9 2016 @ 05:06 AM
link
I love his smile he appears to be having a good time does ole Klippity (klopp).
I love the City website at Christmas they all show they have a sense of humour.

Give him back!.. just kidding, BVB isn't my club anyways.

With Kloppo you have a real down-to-earth guy. I always respected him.

Spot on I only wish he had a team he had picked and not Brendon's. We're all Liverpool fans and we wish him every success - our hopes ride with him.

originally posted by: Shiloh7
a reply to: gortex

Spot on I only wish he had a team he had picked and not Brendon's. We're all Liverpool fans and we wish him every success - our hopes ride with him.

Things are looking up slightly. Then again, we've probably all been around long enough to know that bloody anything can happen. When I get despondent I think it could be chelsea much worse.


Then again, we've probably all been around long enough to know that bloody anything can happen.


Watching Villa Vs Wycombe Wanderers in the FA Cup right now , a game we should win but I know better these days.

posted on Jan, 9 2016 @ 06:56 AM
link
i personally liked his personality ever since he was with Borussia Dortmund in Germany , i was happy to see him as a manager for Liverpool because when i was a kid i used to support the team , Liverpool is a history of it self and deserves a manager like Jurgen Klopp , i think we will see a different Liverpool this season and the next coming seasons.

posted on Jan, 9 2016 @ 07:36 AM
link
He is the next generation that has revolutionised the way people perceive football, like arsene wenger when he started. What he did with Dortmund is nothing short of a miracle.

Although half the time I'm not sure whether he is being funny or rude cos he smiles when doing both.

Just gutted he went liverpool instead of arsenal. He inherited a poor squad.


just how laid back he is


Who have you been watching ?

When things didn't go his way against West Brom last month, he soon showed a different side to his character. 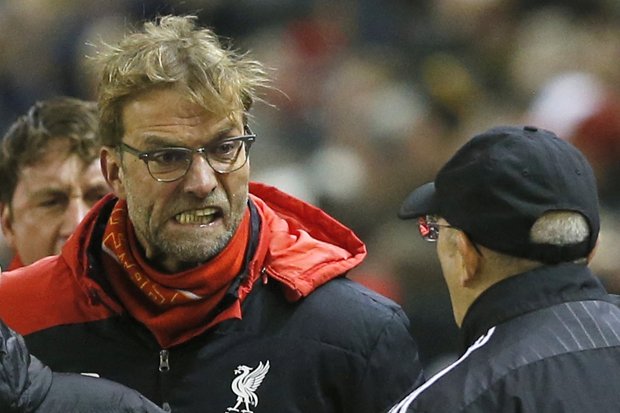 I didn't say he was a saint.