Villages on the moon, constructed through cooperation between astronauts and robotic systems on the lunar surface, could become a reality as early as 2030. That's the consensus of a recent international conference of scientists, engineers and industry experts, including Clive Neal, a University of Notre Dame planetary geologist.

The European Space Agency (ESA) hosted a symposium titled "Moon 2020-2030 - A New Era of Coordinated Human and Robotic Exploration," in the Netherlands. The ESA's vision is that the moon villages could serve as a potential springboard for future human missions to Mars and potentially other destinations.

In order for that vision to become a reality, Neal said, scientists must first determine if the resources on the Moon are as significant as we think they are.

And there's the rub: what is there on the Moon that is not more easily obtained on Earth? For a while, there was hope that the solar wind had deposited large quantities of Helium 3, an isotope of Helium, on the lunar surface. In theory, this isotope could be used as fuel for nuclear fusion. Indeed, Helium 3 fusion was achieved in the laboratory in 2007, but research has come to a stop since then:

It is encouraging that practical plans for colonizing the Moon are being made, but, unfortunately, there is still no economic motive for returning. Ultimately, the Moon will be developed as a shipyard for true spacecraft: its lower escape velocity means that craft constructed on its surface using native aluminum and ceramics can be lofted with minimum energy expenditure. Von Braun's dream of constructing spacecraft in orbit has proven to be unworkable; that's why the ISS is constructed of pre-fabricated modules.

originally posted by: IAMTAT
If they put a golf course up there, too, they won't be able to build them fast enough.

Actually, lunar tourism will probably be the first wave of exploitation after the initial prospecting missions. You'll know when things are about to get serious when the first GPS and communications constellations are put in lunar orbit.

posted on Jan, 8 2016 @ 09:31 AM
link
I would think that a damn good whack with a golf club would get the ball into orbit, so the ball would have to be depleted Uranium?

Alan Shepard did play golf on the moon.

No word on par 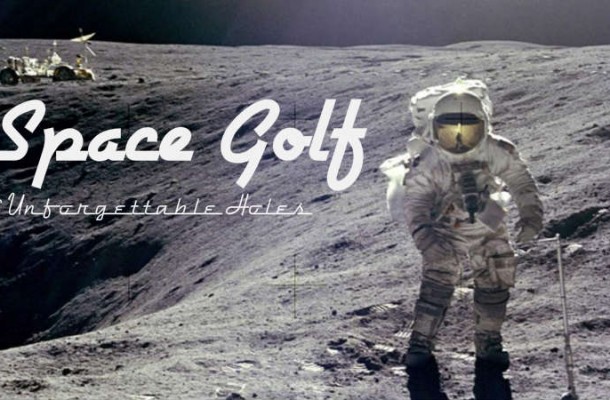 I detect a note of skepticism over the whole venture. 'And there's the rub: what is there on the Moon that is not more easily obtained on Earth?"

Me too. As you point out it is economics that spurs development. A return on investment. And this is most often practiced on short term profit. I see NO short term financial profit for ANYONE by investing in the moon. Especially after the freekin huge outlay it will take. Baring some as yet Utopian energy source to be found up there, there is nothing more to exploit.

As to the long mid term goal of using it as a base for moving on into the rest of the solar system I hold the same position. Why? What's out there that would change anything here on earth. I hear all the time about 'oh, oh, we cal mine the asteroids, we can send huge chunks of ice from way out there, drop them down the gravity well and catch them and use that water for whatever. What a pipe dream. Bring enough water here from elsewhere and what would happen after everybody has a nice drink and shower. Everybody pees, it goes into the drainage systems, out to sea and the sea levels rise.

No. I think that we as tribes of whatever size have been migrating around the planet for thousands of years and it is now a built in assumption that we will continue to migrate outward. Especially here in Western Civ. I think that this idea of colonizing the moon and then the planets is nothing more than the dying embers of our species answer to spoiling our local environment. Move on move on oh human. Piss and spoil, exploit to exhaustion and move on. Only now we find that there really is nowhere to move to.

Next giant leap for mankind should be to moon, not Mars, says Chris Hadfield
www.theguardian.com...

Shake out the bugs, learn the ropes of living in a harsh environment at a location where rescue if needed would
be possible. Learn to make things out of the materials available on the surface, and experiment with mining and building underground. Forget the profit motive, just redirect a small portion of what the USA alone spends on the killingry business and we could be living there within just a few years, and then at least not all of Humanities eggs would be in just one basket if something totally catastrophic did occur on Earth.

We WILL run out of room and resources some day. Lets begin the exploration and advance towards that. Its inevitable.

When you have kids, you remodel, the more you have the less use remodeling does. Got to move, or kick someone out! LOL

Also, the moon has gravity so 'nauts can stay out there longer without chronic muscle atrophy.

And crystal grains grow differently in low/zero gravity. Anything from electrical components to metallurgy... that alone has immense possibilities!

As you say Butter, we ARE running out of room. And drinkable water and breathable air and toxic free environment and radiation free oceans. It IS as you say, time to move. But I just don't see it happening. I want it to happen, I have, my whole life. Im 70 Butter, and I was raised on the dream of living on the moon, of living on Mars. I read the great science fiction books of the 40s and 50s as a teenager. And when we went to the moon I was so excited that it would all be real, and like you I thought it was inevitable.

But it's NOT inevitable. I started reading Sagan and others who conjectured on the state of a civilization that was ready for space. The figures mentioned suggested that of, say, 100 human civilizations that advanced to the stage that we have technologically, how many of them would be able to extend their civilizations on into outer space. The number was depressing. By far, the speculations presented were that the vast majority would blow themselves up first or just melt away in pollution and international squabbling, a few might make it to some level of solar system wide civilization before they crumbled and a few more might have managed to establish bases on the moon. And as much as I, for most of my life, have wished it otherwise, I think that we are clearly in that first category.

Now it may be that some kind of international cooperation might work. But we would all have to pull together. And this would take central planning. It would take a one world governing body to focus the energies of tech and economics in a united push to the stars. So baring some kind of dramatic re-organization of human resources and human governance in the very near future, I think that we are stuck here for good, or bad.

I think that maybe the best we can hope for is that there is advanced tech already available and we are just not being told about it. That there is a hidden push to manage to get only a few, into some kind of extra terran existence. I think that this latest push that is stirring things up recently may be just the public face of this hidden agenda. Nasa getting more money than it asked for. China and others all saying that they are starting on 'crash' programs to colonize space, etc. I think it may be all part of a PR front to get the people of the world to back the policies to squirt a few of us into some kind of "off earth' program. And none of all of that will help the rest of us at all. And that my friend is the best I think we can hope for. But I for one, would endorse even that.

The challenges of living 'off' world are daunting. I think it will happen when it becomes a necessity. We are many thousands of years from that happening. While people complain on here about how we are ruining the earth, the truth of the matter is that the Earth is 99.99% more hospitable than the Moon or Mars. The moon has no atmosphere, tons of radiation and temperature differentials that are hard to manage, 250 in the day and - 150 at night...I have wondered whether we could grow plants there even indoors.

Mars if we can get there, seems like more hope. The temperatures are more manageable, there appears to be at least underground water and the polar ice caps. Perhaps plantation could grow in the soil with a lot of help....It seems within the realm of possibility small groups of humans could live there permanently.

I am in my 50s. I doubt I see any of this in my lifetime either. I had hopes also. I was 5 when we landed on the moon the first time and remember watching it. It was exciting, but, even as a kid, I wondered about the purpose. Resources will drive purpose. As long as they are available on earth, they will preclude this type of travel. A signal of other intelligent life could change things, but, I think the technology for interstellar travel is hundreds if not a thousand years away....

I have to agree that if, and for me that is a big, if, it will be much farther in the future than the idea that we will just move on out into the system now and that will alleviate the problems here sometime in the next couple of decades. Your idea of hundreds or even thousands seems much more reasonable to me, but as you say, we will not be around to see it, nor would we recognize it if we did. It may be that humans may be unrecognizable to us as we view ourselves now. Heck that expansion into the cosmos may be done electronically, loading ourselves up into some kind of wave and zapping across the void like a walk after lunch.