President Barack Obama will introduce a raft of executive actions to tackle US gun violence, bypassing Congress and its staunch opposition to gun control.

Kicking off his last year in the White House with a show of executive power that is replete with political and legal risk, Mr Obama will take a series of unilateral steps to end what he has called "the scourge of gun violence."

Mr Obama is scheduled to unveil the measures in the East Room of the White House, his administration said in a statement.

Speaking ahead of the announcement, Mr Obama used Oval Office remarks to decry high rates of mass shooting and gun suicide in America that far exceed levels in other countries. 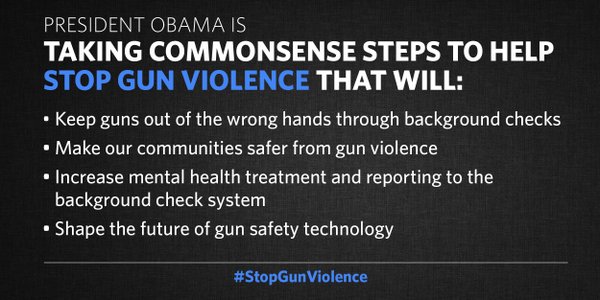 Keep guns out of the wrong hands through background checks
The Bureau of Alcohol, Tobacco, Firearms and Explosives (ATF) is making clear that it doesn’t matter where you conduct your business—from a store, at gun shows, or over the Internet: If you’re in the business of selling firearms, you must get a license and conduct background checks.
ATF is finalizing a rule to require background checks for people trying to buy some of the most dangerous weapons and other items through a trust, corporation, or other legal entity.
Attorney General Loretta E. Lynch has sent a letter to States highlighting the importance of receiving complete criminal history records and criminal dispositions, information on persons disqualified because of a mental illness, and qualifying crimes of domestic violence.
The Federal Bureau of Investigation (FBI) is overhauling the background check system to make it more effective and efficient. The envisioned improvements include processing background checks 24 hours a day, 7 days a week, and improving notification of local authorities when certain prohibited persons unlawfully attempt to buy a gun. The FBI will hire more than 230 additional examiners and other staff to help process these background checks.

Make our communities safer from gun violence
The Attorney General convened a call with U.S. Attorneys around the country to direct federal prosecutors to continue to focus on smart and effective enforcement of our gun laws.
The President’s FY2017 budget will include funding for 200 new ATF agents and investigators to help enforce our gun laws.
ATF has established an Internet Investigation Center to track illegal online firearms trafficking and is dedicating $4 million and additional personnel to enhance the National Integrated Ballistics Information Network.
ATF is finalizing a rule to ensure that dealers who ship firearms notify law enforcement if their guns are lost or stolen in transit.
The Attorney General issued a memo encouraging every U.S. Attorney’s Office to renew domestic violence outreach efforts.

Increase mental health treatment and reporting to the background check system
The Administration is proposing a new $500 million investment to increase access to mental health care.
The Social Security Administration has indicated that it will begin the rulemaking process to include information in the background check system about beneficiaries who are prohibited from possessing a firearm for mental health reasons.
The Department of Health and Human Services is finalizing a rule to remove unnecessary legal barriers preventing States from reporting relevant information about people prohibited from possessing a gun for specific mental health reasons.

If you really analyse those 4 points above, you could draw the conclusion that the US government, via Obama, seeks to enact stage 1 of the deconstruction of the 1st and 2nd amendments. You see, take that first point for instance and review what powers the FBI would be granted in order to increase surveillance of the population "to improve processing background checks 24/7". Also, who is going to pay for the additional 230 personnel to help process these checks? That's right - you, the taxpayer will be coughing-up for this.

Or take the 2nd point - who is going to pay for the additional 200 ATF agents to "help enforce our gun laws"? - correct again..you, the taxpayer.

Now, on point number 3, I am all for this....because the mental health issues which surround mass shootings, as well as entrenched cultural parameters which account for the majority of gang-related gun violence is definitely in need of attention. Those 2 issues, imo, are the root cause of gun related deaths.

On that last point, he is missing the point because if you correctly address point number 3, there will be no need to research "gun safety technology" - you simply need common sense and education - not funneling vast loads of money you don't have into programs that will ultimately be of little benefit to society if you don't improve standards of living, cultural inequality and education first.

In conclusion, all I see the government doing here is gathering a database on every single gun owner (eventually) whilst at the same time making it increasingly more inconvenient and difficult to purchase a firearm. Hell, who knows, maybe a "conspiracy theorist" or an "anti-government activist" will now be classified as a mental health issue resulting in you being blacklisted from owning a firearm.

He's gonna go out with a Bang - that's for sure.

They are not laws. The President cannot create laws. These are executive actions.
www.npr.org...

angryhulk
+18 more
posted on Jan, 4 2016 @ 11:07 PM
link
So; background checks, monitoring and prevention of illegal arms trafficking, increased mental health support and gun safety technology. Isn't this a good thing because it sounds like a common sense approach to me? Obama isn't taking guns away from anybody, especially Mr. Normal.

There will be a lot of these threads in the coming days, they should be declared fact-free zones


Obama isn't taking guns away from anybody,

According to Phages link that would be correct


"[Most] executive actions carry no legal weight. Those that do actually set policy can be invalidated by the courts or undone by legislation passed by Congress."

"A good way to think of executive actions is a wish list of policies the president would like to see enacted."

The Gun an Ammo industry is well lobbied for, hence well protected by the DNC and the GOP. This will likely just generate more Gun and Ammo sales and nothing more.

Obama and the Democrats are the Gun and Ammos industry best sales team.

This is a method to sell guns and ammo for a large lobbying group and a 2016 election B$ spin cycle.

I'm a lifelong gun owner and I'm glad as hell he's doing it!

Nowadays, this is the only way to get anything done in D.C. because Congress won't address any issue that doesn't include repealing ObamaCare, defunding Planned Parenthood and outlawing gay marriage.

Whatever he does, I'm confident it will get challenged in court and more than likely end up in front of the SCOTUS.

So I guess we'll find out soon enough just how Constitutional it is.

You know what they say; Lead, follow, or get the hell out of the way!

I'm glad that someone is finally making a move on this issue and I think a lot of others are as well.

antar
+8 more
posted on Jan, 4 2016 @ 11:19 PM
link
Bigger government, more money in the pharmaceutical company pockets as well as socialism healthcare, categorizing who can own a gun when they are already stating, Patriots, Militias, Homeschoolers, Vetrans, and any other group they deem non conforming. Great. Step one off to a roaring start. Killers will still get guns, psychopaths and every other criminal will still have guns. Thieves and robbers will take guns away from law abiding citizens. Drug world will continue to have guns.
edit on pm131pmMon, 04 Jan 2016 23:24:05 -0600 by antar because: (no reason given) *Keep guns out of the wrong hands through background checks*

Why do they keep ignoring the folks who injure, maim and kill people with illegally held firearms?
Why do they think that tightening the vice on owning a firearm legally, would put a dent in firearm fatalities?
Why do they think anyone with ill intent would follow the law, or his EO in the first place?

Perhaps a PILOT program of his 200 new ATF Enforcers dispatched in Chicago for a year to help the folks there deal with their daily terror?
Clean out the highest murder rate communities in the nation FIRST?
That might set an example, and be worthy of the increased taxpayer money spent on their annual salaries...

That looks reasonable on the surface, but looks more like an easier way for the FEDS to take away your right based on technicalities, I think more should be done to help those who are struggling from mental illnesses, a prescription and $$ in Big Pharma's pocket does not always equal proper treatment of some folk's struggle...

From the man who pissed away half a billion on Solyndra... NO thanks, I don't want bureaucrats who don't know squat about a firearm, try and come up with some google glass BS to make it safer...


Why do they keep ignoring the folks who injure, maim and kill people with illegally held firearms?

They aren't. When those people are caught they are dealt with. Except perhaps, in certain cities.

That looks reasonable on the surface, but looks more like an easier way for the FEDS to take away your right based on technicalities,

Perhaps if you read what the action says...

I agree with mental health checks because mass shooters are all bat crazy. I also agree with gun safety technology. I'm all for safety and I see no wrong in researching it. I know a family who has guns, loaded, all over their house and always has. The kids are taught to respect the gun, how to use it, etc. But they are the minority and there are plenty of families who hide their weapons from everyone, kids included, but even the ones who know about the gun still hurt themselves or their friends.

If only the mother of the Sandy Hook shooting had better gun safety technology, and a brain.
edit on 4-1-2016 by Swills because: (no reason given)

SPECULUM
+4 more
posted on Jan, 4 2016 @ 11:29 PM
link
It Violates the rights of Law abiding Citizens, and Stops Nothing
What will happen, is that it will make targets out of Government and Citizens...And That's All

When the intent is blurred, and much leeway allowed, who do you think gets that leeway going forward?

originally posted by: SPECULUM
It Violates the rights of Law abiding Citizens, and Stops Nothing
What will happen, is that it will make targets out of Government and Citizens...And That's All


originally posted by: SPECULUM
It Violates the rights of Law abiding Citizens, and Stops Nothing
What will happen, is that it will make targets out of Government and Citizens...And That's All


If its Passed and Used, THE PEOPLE will focus on their aggressors..150 million Armed, against the 1 who forced the issue

originally posted by: Phage
a reply to: SPECULUM
If what is passed? This is not a bill.