Are you a LIV?

posted on Dec, 30 2015 @ 10:59 AM
link
So, just what is a LIV? A LIV or Low information voter is someone who will vote blindly and not by using the information or subject matter that is available to come to a conclusion on who to vote for. They are not racist. They are also not dumb. They simply vote based on internal feelings or based on something that they agree with in a candidate.

This is very common with voting the party line. Well, if my family all voted Democrats I should( or vice-versa with the GOP). If you like the way a candidate looks or does not look, you would be a LIV. I could also say that Obama supporters were LIV's because he pulled 98% of the black vote. Is that statement racist? No, but the MSM would tear a candidate apart if they said that or if it was referred to in the 2008 election. It actually was by Rush Limbaugh talking about how Democrats all simply pull for their candidate no matter what. He was called a racist by..the left!

In this election season, this has become a very well used term by the Democrats to describe anyone who is not voting for the establishments picks, meaning HIllary or Jeb. I have heard Sanders supporters called LIV's as well as Trumps. I read it hear in these forums.

Be well educated before you vote. You should. In Sun Tzu's The Art of War is explains that if you do not know your enemy you are bound to fail. The same should go for an election. I have read books by quite a few of the candidates as well as researched them all. This way, if I have a conversation I am not blindly following who my choice is but can understand where the other person in the conversation it getting their information and basing their opinion.

posted on Dec, 30 2015 @ 11:20 AM
link
a reply to: matafuchs
I define the super-LIV as a person that votes, and after the election, can't tell you who the candidates were.
They are out there, I have met them.

posted on Dec, 30 2015 @ 11:33 AM
link
We have both ends of the spectrum here. Some will constantly post about things the Republicans have done and completely ignore anything bad from "their" side. Same with Republican party fans. Anything the Democrats/Liberals put out, it must be bad. Neither side gives a damn about you or I, as long as they get their way and stay in power. No matter what laws they inflict on us, they always come out on top.

I have never voted FOR any candidate. I always just vote AGAINST the Fascist corporate oligarchian.

But I have no illusions that my vote means a damn thing in the grand scheme of things. The mega corps have ways to get what they want.

I'm truly surprised at the emotional investment some people put in political theater.

It's hard to give any credibility to anyone that buys into this BS.

originally posted by: crazyewok
The funny thing is

The low info voter argument is just a lazy way to debate politics, doesn't inform anyone of anything, and is pretty much the definition of trolling.

posted on Dec, 30 2015 @ 11:41 AM
link
The sad thing is LIVs can make or break an election. I actually know of people that voted for Obama because they thought he was handsome with those big cute ears. "How could you not vote for those big cute ears?" And, of course, we know for a fact that 98% of black voters voted for him because of the color of his skin. That is low information and look where we are now. Mitt Romney would have been the best president, imo, but one little piece of information that got blown out of proportion and taken out of context did him in by LIVs.


originally posted by: crazyewok
The funny thing is

The low info voter argument is just a lazy way to debate politics, doesn't inform anyone of anything, and is pretty much the definition of trolling.

I think you can find LIV both sides.

They are the people that can only recite party lines and slogans but cant grasp the deep concepts.

But to just dismiss someone as LIV is lazy and in some ways makes you a LIV too.

oh please, we all know your Right wing slant on everything and where this thread is leaning. To rag on liberals....your above post proves it.

It seems those are targeted more than ever these days, as there are more unintelligent than intelligent people in this country these days.

You don't have to work hard to gain the vote of an unintelligent person either...

It's hard to be a "low information voter" if you're reasonably intelligent. I think this LIV is just a PC way of saying, "the moron-class of voters".

Remember 50% of any population will be below 100 IQ

How about LIQVOR and we call it even? My treat.

The Left-slanted MSM is the messenger.

The most popular media are mostly in on the successful propaganda efforts.

What's scary is the mental awareness level in this country. There literally are people out there walking around who don't have the capacity for internal dialogue. If they do hear themselves in their own head, its rare and they call it "God" or something. They have to read out loud too -- as they can't "think" or "talk" to themselves in their head. They just sort of wander around aimlessly. It's as if the two hemispheres of their brains aren't communicating and their corpus callosum is non-existent or damaged.

Makes you wonder if anyone even knows there local candidates names let alone there stances and voting record.

It what I did last election here. I looked up my local MP's record and here financial backers ect, there did the same with here opposition. It took me a lot of time I felt I could make a informed decision.

It's just like school...it's a popularity contest, a contest of image. People are herd animals and do whatever the majority of people do. It's sad, but true.

Think back, did the person who probably deserved to be Prom King win? Were they even nominated -- or was the "obvious popular choice" just a foregone conclusion?


oh please, we all know your Right wing slant on everything and where this thread is leaning. To rag on liberals....your above post proves it.

oh, please, we all know your Left wing slant on everything and where this thread is leaning. To rag on conservatives. ...your above post proves it.

posted on Dec, 30 2015 @ 12:20 PM
link
This was really not about smashing either party but those who defend it like a LIV. Every POTUS in the last 70 years had faults. some more than others, and they have been primarily, as stated, popularity contests. That is what they are.

But when someone feels strongly about a candidate, they should know who they are voting for. A perfect example was our yearly Christmas Eve party we host. There is a good mix of both sides and those in the middle. We had about 40 people over. I would say out of the 40, there were about 25-30 LIV's. How did I know?

Because when they would talk about their candidate it was the same points that circulate on Facebook. When they would talk to one of the HIV's it was interesting because they started talking. Whether or not informed, whether or not they will change their mind, they were intrigued that there was so much they did not know about their candidate. About half of those people engaged and the others did not. The one who swears Bush is still getting the nod because of the Bush Dynasty and the Hillary supporter who thinks she walks on water and thinks Benghazi is a sports car.

No matter, but it is better than polls. To see how people actually think and who can be swayed. We are all just human...

No, it's just morons. Morons in both the Republican and Democrat parties. 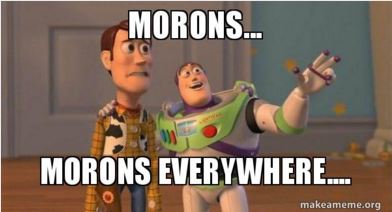