The Yngling mounds of Uppsala

There are several burial mounds in FennoScandinavia to be discovered and ancient relics and places to study. What they have discovered is just a top of iceberg because there is a lack of money to actual studies.
For example in Finland alone this is a map of old relics found ( but not more studied ) google map i was trying to find similar from Sweden and Norway.
How long distances Vikings actually travelled is still discussed. Vikings discovering America is still denied which is ridiculous as Vinland has solid evidence them being that far.
I hope money would not be such an issue but it is. I am sure same situation is in other countries in North.

Who denies that there were Norse here half a millennia before Columbus? L'Anse Aux Meadows along with the ascribed date, is universally accepted by archaeologists and historians. There are other potential sites on Baffin Island, Willows Islands and the Avayalik Islands showing trade and further contact with Arctic First People. There isn't a single person in Academia though that denies the significance nor the dating of L'Anse aux Meadows.

Did they go more south than L'Anse Aux Meadows is still discussed. it is about credibility of Sagas, now they do admit that Vinland is L'Anse Aux Meadows when it also could be Qvenland which is in around Gulf of Bothnia. It is still discussed. Greenland people and quite a lot people in Scandinavia have native american DNA
National geographics i also have tested my DNA also my father has we both have native DNA ( he has even DNA matching Peru population ) it is interesting to see how discussion evolves around Vikings and America. I personally believe they went more south my father has studied languages and Quechua language has many proto finnish, proto scandinavian words which means same as here in North. Time will tell.

I certainly don't dismiss the notion that they went forth south. In the 50's and 60's the view of where the Norse may or may not settle certainly skewed looking at more northern sites as suitable based on interpretations of the pronunciation and etymology of Vinland and skewed them from looking at most of the Atlantic coast as well though I don't recall off the top of my head what that particular prejudice was. Anyway... Based on their ability to make it to the Mediterranean as well as up the Volga river into Russia, I don't discount the ability of the Norse explorers to make it anywhere that there were available supply lines for them to draw from. As you say, time will tell and one mustn't get too frustrated when archaeology doesn't reflect what is possible or even likely. In Anthropology or Archaeology, nothing that can't be demonstrated with a high degree of veracity. If the evidence is there, it will turn up. That much is certain.

originally posted by: Kantzveldt
The Yngling burial mounds of old Uppsala in Sweden consist of thousands of small burial mounds, likely containing cremation urns, in the vicinity of three primary mounds, one of which in some tradition was considered to contain the remains of the God of the world, Freyr, who was held to have founded the site and been the progenitor of the Swedish Yngling Dynasty.

Frey built a great temple at Upsal, made it his chief seat, and gave it all his taxes, his land, and goods. Then began the Upsal domains, which have remained ever since. Then began in his days the Frode-peace; and then there were good seasons, in all the land, which the Swedes ascribed to Frey

Frey was called by another name, Yngve; and this name Yngve was considered long after in his race as a name of honour, so that his descendants have since been called Ynglinger

Frey fell into a sickness; and as his illness took the upper hand, his men took the plan of letting few approach him. In the meantime they raised a great mound, in which they placed a door with three holes in it. Now when Frey died they bore him secretly into the mound, but told the Swedes he was alive;

It looks like from old photographic evidence these may have been somewhat pyramid in form, but they are just earthen mounds and time erodes all things and now they are rounded, it is also jeld the mounds were of three great Kings.

According to the Ynglinga saga the kings Aun, Egil and Adils were buried in Old Uppsala. One interpretation is that these are buried in the three great mounds.

They belonged to the Ynglinga line which, if the Icelandic sagas are to be believed, was established in Old Uppsala in the late 5th century.
The term “The Ynglinga line” is derived from the fertility god Freyr, also known as Yngve-Freyr. The kings meant they were descended from him 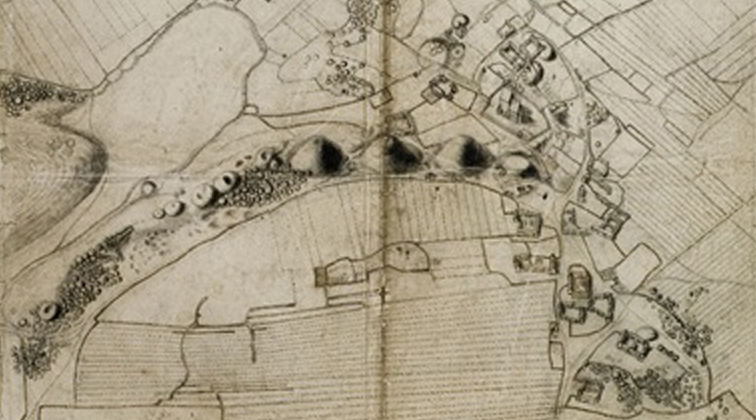 I;m not so sure this site is very well understood, only in 2013 excavations uncovered astonishing constructions of lines of pillars likely around 8 meters in height, 144 of them extending over 900 meters, i looked at this alignment and perhaps it indicated the rising point of Pollux in Gemini at the time of the Spring equinox, there is also another axis known to extend for at least 500 meters.

It's also possible that when the sun was setting in the South West at a certain time on a certain day the shadows cast by the poles would all form alignment.


There was a very important Temple at Uppsala, the construction of which Freyr was held to have undertaken, dedicated to himself, and illustrations of this generally look pretty much like most Northern European churches, because after all they were originally built in the style of the great halls, which the presumed Temple at Uppsala more likely had the function of, as rituals generally took place in the open.

The archaeological finds in combination with literary sources lend support to the idea that Uppsala had hall buildings with ritual functions. Adam's temple is not confirmed by indigenous sources, though these often refer to buildings. Ynglingasaga says "Freyr erected a huge hof at Uppsala and made his chief residence there" The word hof/hov probably denoted "hall", but may connote "sanctuary" as well. It appears quite frequently in Swedish place-names, where it sometimes denotes "banqueting hall." 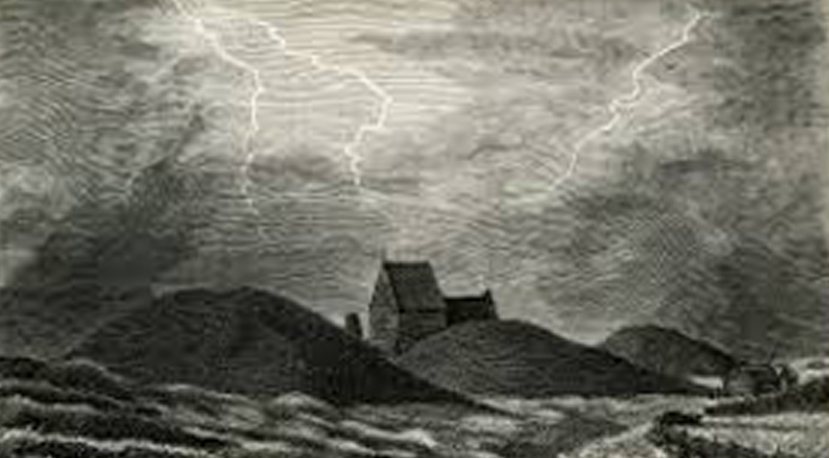 Until the Temple was destroyed in 1087 regular gatherings and sacrifice were held there;

Every ninth year there is a blót of nine days, a common feast for everyone in Sweden. Then they sacrifice nine males of each species, even men, and the bodies are hung from the branches of a grove near the temple. No one is exempt from this blót and everyone sends gifts to the shrine, even the kings. Those who are Christian have to pay a fee not to take part in the blót

The sacrificial cult at Uppsala derived from Freyr himself being that Deity of nature which is sent to the underworld at the end of the harvest to return in Spring, a God of fertility, je thius instituted the basic principle of sacrifice toward the future generation of life.

in order to mollify the divinities he did indeed make a holy sacrifice of dark-coloured victims to the god Frø. He repeated this mode of propitiation at an annual festival and left it to be imitated by his descendants. The Swedes call it Frøblot

The festivals themselves appear to have been more jolly rather than grim occasions;

...at Uppsala in the period of sacrifices, he had become disgusted with the womanish body movements, the clatter of actors on the stage and the soft tinkling of bells. It is obvious how far his heart was removed from frivolity if he could not even bear to watch these occasions. A manly individual is resistant to wantonness 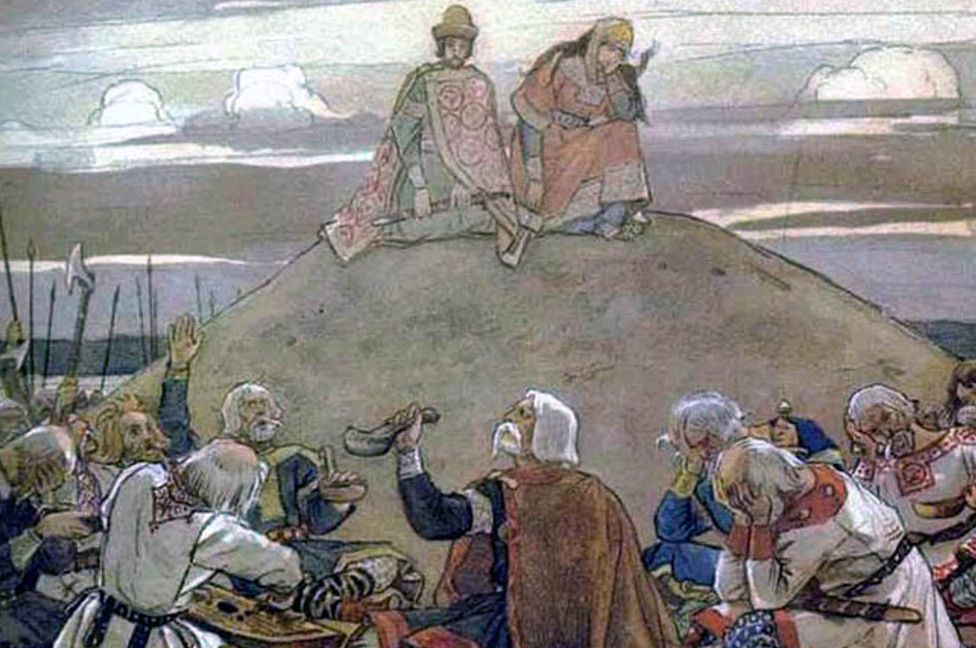 Perhaps that was a celebration of the return of Freyr in Spring, there would have been much in common with these and the cult of Dumuzid and Inanna in Mesopotamia, they were accused of similar festivities, the cult of resurrection, Freyr also had the same cultic animal as Damu, the boar, but anyway there we are, a very important site in terms of Northern European early religion.

Interesting. I'm mostly Swedish and have family in Uppsala, but the one time I visited I didn't make it there.

I suppose like Christmas it is all about the family, the cult of Freyr at Uppsala was the cult of the first ancestor and the ingathering of the entire Swedish family at the great hall, and we might suppose that sites such as Stonehenge in Britain had served a similar function, indeed if you go back to a site such as Gobekli Tepe and the gathering there of affiliated tribal groupings that would have seen present the basis for pretty much all modern European ancestry.

The Slavs too have a Deity Rode who represents the first ancestor, perhaps associate with Frodhi/Freyr, and that would be getting closer to the original core region from which the expansion, the great halls they gathered in within life translated of course to the ancestral gathering in the hall of Valhalla.