posted on Dec, 22 2015 @ 11:57 AM
link
A little story about those fascinating years of the Cold War Era. So many secrets and conspiracies around the world in those days, some of these stories come from unexpected places and revealed now by the witnesses still alive. I love the "Vintage flavor" on this kind of stories but this one also called my attention since I lived there for few years.

I translated the source here, enjoy :

...and a little later, an airliner of Lloyd Aereo Boliviano crashed on the heights of Tacna almost on the border with Bolivia and then we sent a reporter and photographer to cover the news.

But something extraordinary happened the next day, a friend told us about the arrival to the airport of an American plane with two helicopters inside that were unloaded and already testing. 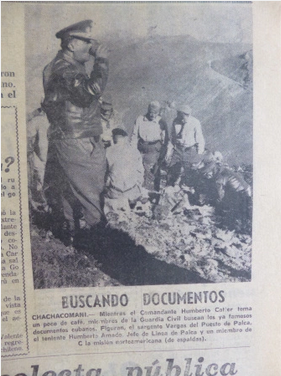 We rushed to the airport and saw the enormous apparatus indeed, perhaps an Hercules, armed and ready helicopters, a pair of large green tents, antennas, armed US soldiers coming and going in the improvised camp.

Why, why they had reached those gringos? Soon it became known that inside the crashed plane were traveling Cuban diplomats. The Americans wanted to obtain documents they believed were carried in the flight to Bolivia. Remember Fidel Castro just declared "the Marxist character of the Revolution" and the antagonism was open and aggressive.

They came into effect at the accident, found the documents and perhaps helped transport the corpses to Tacna in their modern vehicles.

But the tragedy was not finished because a forensic pathologist, the distinguished Dr. Céspedes from Tacna barely reached the heights of the accident to extend official documents when he dropped dead of a massive heart attack caused by the altitude. The next day, when a desperate resident of Arica died too, as soon he arrived and found the body of his wife right there, he hugged her and died.

I read this story sometime ago, saved and forgot about it. Today I found information about that flight and the ICAO Accident Digest. The plane crash really happened. All the crew and passengers reported dead. Time to share it now. 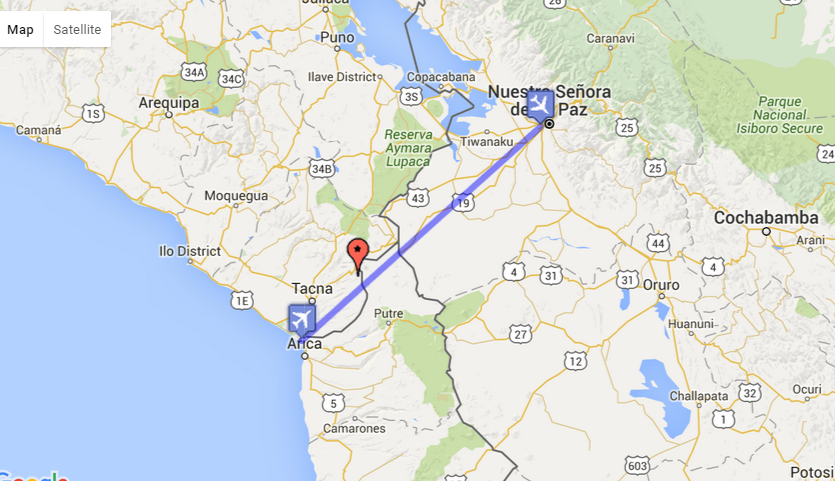 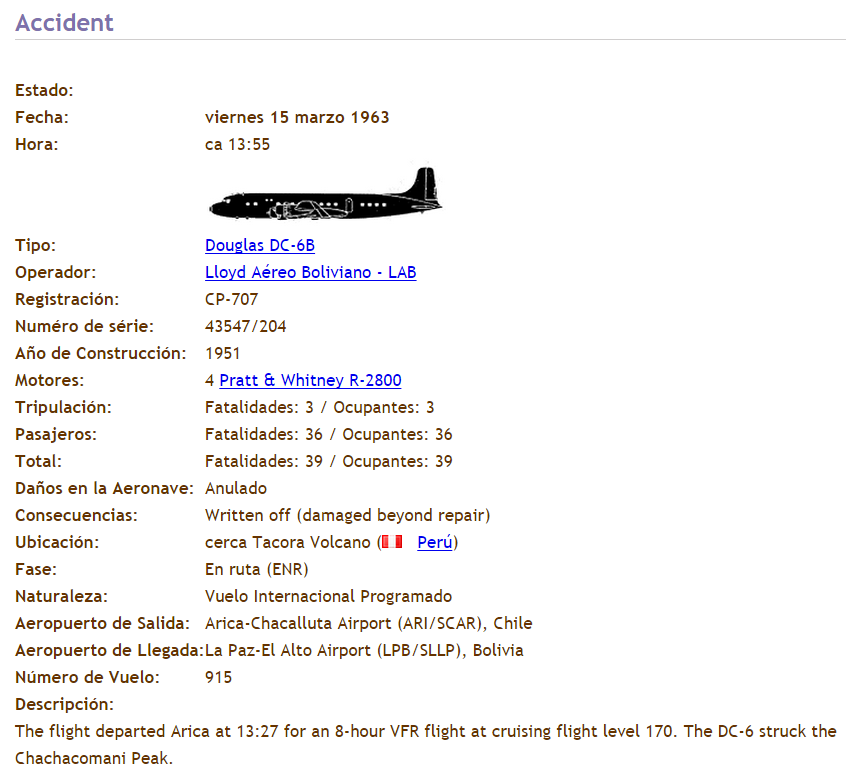 The flight departed Arica at 13:27 for an 8-hour VFR flight at cruising flight level 170. The DC-6 struck the Chachacomani Peak.

PROBABLE CAUSE: "A flight under visual flight rules was attempted below the minimum altitude indicated in the flight plan in weather conditions that were marginal for this type of operation and were associated with the severe turbulence which usually exists in that region (western area)."

The documents about the weight of the flight were not in order, they talk about 1298 Kg difference. Strange at least.

Everything in the plane was in good conditions and working. Navigation, motors, radio, all was fine according to the ICAO report (pages 80 to 85). No stormy weather neither.

I'd really like to have your comments my friends.

nice thread, I like old stories like this...so the weight was off?..people dropping dead......really interesting for sure

originally posted by: smurfy
Well, the crash is certainly mentioned in confidential US file 0118 circa 1963 onward.
What the files say, that I don't know yet.


Nice. I guess that's enough to tell the story is real. Maybe flying at dangerous low altitude could be combined with the weight mess. Parachutes ?