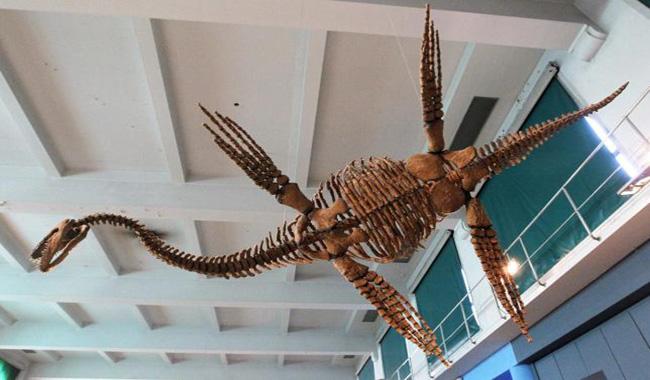 Didn’t you know that the enormous plesiosaurs and the diminutive penguins Have something in common as both creatures have similar mechanical movements while they swim.

The plesiosaurs lived in the seas when the Earth was still dominated by dinosaurs. These marine creatures pounced on their flippers as if they are “flying” underwater. This movement is the same with the penguins.

The plesiosaurs are equipped with four large flippers and had long necks; thus, are reminiscent of the very prominent Loch Ness monster. This species of dinosaur appeared on the planet between 200 million and 66 million years ago. The plesiosaur fossilized remains were first described in 1824. Back then, the scientists had been arguing on how these marine reptiles swam.

Adam Smith, who happens to be one of the Britain’s Nottingham Natural History Museum paleontologists, quipped, “Plesiosaur swimming has remained a mystery for almost 200 years because it is difficult to determine how an extinct animal with a unique body plan moved.”

The scientists employed computer simulations hinged on the anatomy of the Meyerasaurus. They utilized this technique to discover the most effective swimming strategy for its body structure.
...

I find it fascinating how computers help us understand how extinct animals looked, sound as well moved. For some of those we should be thankful they went extinct...

Wem, not sure if this is more appropriate in History or Science... will leave it up to mods to determine...
edit on 21-12-2015 by SuperFrog because: (no reason given)

posted on Dec, 21 2015 @ 07:32 AM
link
It's a possibility they still exist. If I were a pleisioaur during a cataclysm, the first thing to do would be dive deep.

originally posted by: Oannes
It's a possibility they still exist. If I were a pleisioaur during a cataclysm, the first thing to do would be dive deep.

Hmmm, wondering the same. Like if there were fresh water Pleisioauressess.......Nessie anyone?

originally posted by: Thecakeisalie
a reply to: SuperFrog

BS. Spielberg used the archeological data available at the time.

It's only in recent years that the theory of feathered dinosaurs has been acknowledged in the scientific community.

When I was a kid, dinosaurs were just giant, scaled lizards.


originally posted by: Thecakeisalie
a reply to: SuperFrog


BS. Spielberg used the archeological data available at the time.

I think you meant Paleontological. Archaeology studies artifacts left by humanity since the advent of civilization, Anthropology deals with humanities past prior to sedentary life and Paleontology deals with other life from Pleistocene mega fauna to dinosaurs to the vast array of life during the Carboniferous for example, which was hundreds of millions of years prior to the Dinosaurs. But back to the topic at hand... Spielberg et al made Dinos that would look cool to the audience and while incorporating some newer science such as T-Rex being able to run rather quickly, they also fudged and exaggerated other creatures for cinematic effect. This includes the most recent Jurassic Park and the continued use of Velociraptors who were far larger than the turkey sized lizards we know from the fossil record. Accuracy of cinema and current science weren't always compatible.

It's only in recent years that the theory of feathered dinosaurs has been acknowledged in the scientific community.

Not quite, its just been the last couple of decades that advancements have allowed us to gather more definitive data proving that many dinosaurs had feathers. Archaeopteryx for example, was found in the mid 19th century as have other species and genus in the intervening century and a half. Thanks to Scanning Electron Microscopy, evidence of the remains of feather shafts in the skin has expanded exponentially as well as preserved skin and feather impressions.

When I was a kid, dinosaurs were just giant, scaled lizards.

As cool as I thought they all were as a kid, they were boring in comparison to how they are depicted now right? In the 70's they were all green, no feathers and kind of uniform and monotonous. Now we see widely varying colors of both skin and plumage. My son definitely grew up with cooler dinosaurs than I did and most of them are the very same ones I learned about as a child. It's a good time to be alive if you're into science, no doubt about that.

posted on Dec, 22 2015 @ 06:41 AM
link
From what I remember, world known paleontologist Dr. Jack Horner was Spielberg's adviser while making Jurassic Park movie. Some might remember his Ted talk on how to build dinosaur back into life, and joke that if scientist did what movie suggested, instead of small dinosaurs you would end up with room full of mosquitoes.

As for color and life of dinosaurs, we are still learning and deciphering earth's past. It takes new tools, new knowledge to get to new discovery, and yes, in process we might have to change some previously adopted thesis, but that is best part of science, ability to change and accept new findings.

I second peter vlar, dinosaurs are much cooler today.

Yeah, sorry for my ignorance. I wrote the post in a hurry. Paleontology was the word I was looking for but the premise of my post stands as you have set out more clearly.

I envy the kids of today because they will be so much smarter than us oldies with all of the new discoveries being made and having the internet from day one.

If only I had Google when I was five years old, I think my life would be very different right now.

Sorry to drift. On topic, yes , the revised dinosaur depictions are way cooler than them all being green or grey.