The Alabama Justice Project has obtained documents that reveal a Dothan Police Department’s Internal Affairs investigation was covered up by the district attorney. A group of up to a dozen police officers on a specialized narcotics team were found to have planted drugs and weapons on young black men for years.

Don't know much about this but seemed like something worth watching. My guess is that it is mostly true but I won't be surprised to find the story is breaking at a politically opportune time for someone.

AAAAaaaaaaannnnnnnnnddddddd no one is surprised.


My guess is that it is mostly true but I won't be surprised to find the story is breaking at a politically opportune time for someone.

Pretty much my take on it as well. Good on all the cops that came forward!

So a question for our LE friends, does it seem like special units seem to get away with much more, and are under far less oversight? It's alway seemed that way to me. If they go bad, it seems like they go REALLY bad.

I remember learning in one of the LE classes I took that the older and larger the department, the more likely there would be corruption. Would you say that the same is also true of smaller departments? I always figured a smaller department like this one with fewer than 200 officers could very easily be corrupted, the people in charge weeding out the undesirables.

Can't get the link to work.

posted on Dec, 1 2015 @ 11:25 PM
link
I wonder how many people believed those kids that those drugs or that gun was planted?

posted on Dec, 1 2015 @ 11:27 PM
link
Quite damning if true....this kind of thing can only really go on for a decade if there is a cover up through the hierarchy of the justice system.... And if those promoted were indeed involved well that is more proof that an overhaul of the justice system is needed ...pronto....

I think that site is being hugged to death right now.


They would be one on a very long list.

posted on Dec, 1 2015 @ 11:48 PM
link
I read the report and the investigating officers documents and not one time in any of it except for the headline was"Black" mentioned. It does say "mostly minority" when related to the victims of this corrupt Cop shop. The pic of them all holding the rebel flag doesn't help their case much either. I'm just getting worn out with the sensationalism and race baiting so common in headlines lately. I will agree while most of the victims were likely black, are the White and Latino ones gonna stay in prison? Most people won't take the time to even read the material. In fact the pic of the racisists holding the flag right under the headline is match enough to ignite riots on campuses across the country,that is before the first word is even written.

I can't say it enough! They want us separate and fighting each other... When this is the trend we should learn from history and instead of buying it, we should start watching them to find out what we should really be concerned with. They'll be sending soldiers to the Russian front while everyone here is worried about what's going on with the blacks at Mizzou. Like a bunch of idiots.
edit on 1-12-2015 by wastedown because: grammar nazi evasion

originally posted by: Jahari
Not really breaking news. This has been happening for years all over America.

Suspecting it's happening and having proof of it happening are very different things.

posted on Dec, 2 2015 @ 09:27 AM
link
It doesn't surprise me. It is a dirty game. Cops aren't routinely planting evidence on honor roll students. What is more likely happening is that they are dealing with known dirt bags / dope dealers and a cop will try to help their case getting them off the street. Not justifying it, but I think you have to look a little deeper as to what is actually going on.

posted on Dec, 2 2015 @ 09:49 AM
link
Planting drugs and, or weapons on anyone by the police, so they could be jailed and charged with a serious crime when the person didn't commit any crime or have any knowledge of it is one of the most despicable things you could ever do to someone in this life besides just shoot them dead, but then sometimes that would be more merciful than the life's destruction caused by planting evidence against someone.

Doing that is worthy of immediate DEATH. There is nothing more dangerous in society than a corrupt cop that plants evidence and totally destroys the lives of people that they do that to. The repercussions can ripple through many generations changing what could have been, to a darker future for the families of the people ruined by those kinds of police.

There should be a special gas chamber in every internal affairs department just for discouraging any unlawful kinds of things like planting evidence, and district attorneys that help cover up such thing should be shoved in there right along with evidence planters. Or maybe widespread vigilantes would make an even bigger point on what police corruption can become. It can become like the wild west all over again, and maybe it needs to. The corrupt who have power will never turn themselves in, and rarely resign, always denying their acts against those they were entrusted to serve. Like our current top leader for example. When those at the very top get away with corruption again and again, it makes it very easy for others to follow by example.


originally posted by: Jahari
Not really breaking news. This has been happening for years all over America.

Suspecting it's happening and having proof of it happening are very different things.

Edit - I should have known it was bait.
edit on 2015 by BlubberyConspiracy because: (no reason given)

Edit - I should have known it was bait.

I'm not trying to bait out a response at all, I'm serious. You can't goto congress or the courts with "we think X is happening, we want you to stop it". You need to be able to prove the allegations, just like what has been happening with domestic spying lately because of what Snowden revealed. Change on that front is actually happening now after a decade of nothing because we couldn't prove what was going on.

When there's proof that cops are planting evidence steps corrective steps can be taken. In the last year we've gotten body cameras on the police, black sites in Chicago coming to light, proof on multiple occasions of evidence being planted, and even evidence of murders being covered up. Change is happening, it might be slow but 10 years ago none of what I just typed would be true. 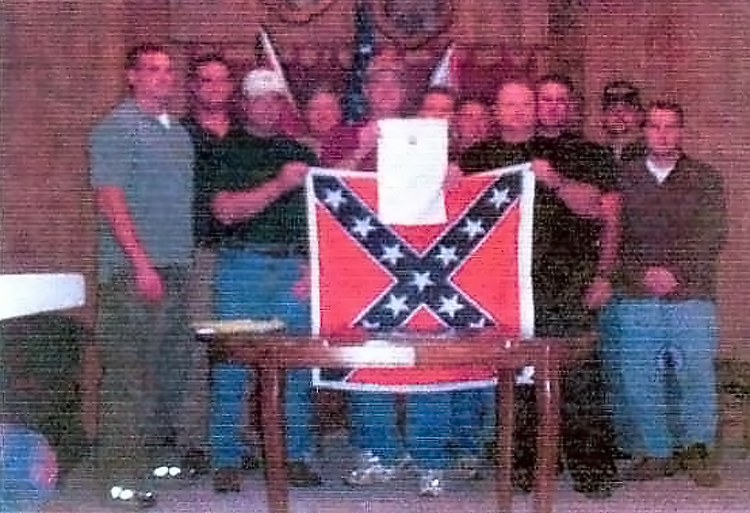 All of the officers reportedly were members of a Neoconfederate organization that the Southern Poverty Law Center labels “racial extremists.” The group has advocated for blacks to “return” to Africa, published that the civil rights movement is really a Jewish conspiracy, and that blacks have lower IQ’s . Both Parrish and Hughes held leadership positions in the group and are pictured above holding a confederate battle flag at one of the club’s secret meetings.
henrycountyreport.com... district-attorney-doug-valeska-complicit/


While there is a thin line between race bait reporting and reporting that have a racial angle, I do not see it in this example one would have to bypass the group's intent in racialized injustice, the real problem is real criminals that got arrested by these guys maybe sent out on the streets, if white or Latinos were unjustly arrested then that should be looked into fore instance I don't know the percentage of Latinos in Alabama jails vs their population in that state , another question how wide spread are secret police organization like this one is in other precincts and in other states, not to mention low level non violent crimes that help pad U.S prisons with Black men.