posted on Dec, 1 2015 @ 04:29 PM
link
I didn't know where to put this,at first I thought it would be better to place this in the jokes, puns and pranks section. We could definitely laugh about it over there, but seriously ,war is nothing to laugh about so I also take this treat seriously in times like this. Could they really pull this off 4500 miles apart, and do they have nuclear weapons?

Kim Jong-un has warned that if Turkey confronts Russia or lends support to ISIS in Syria and Iraq, it will come under nuclear attacks by North Korea, the Lebanese daily added. The North Korean leader has also promised to wipe Turkey off the map if Ankara takes part in the Syrian war and cooperates with the US and helps ISIS. 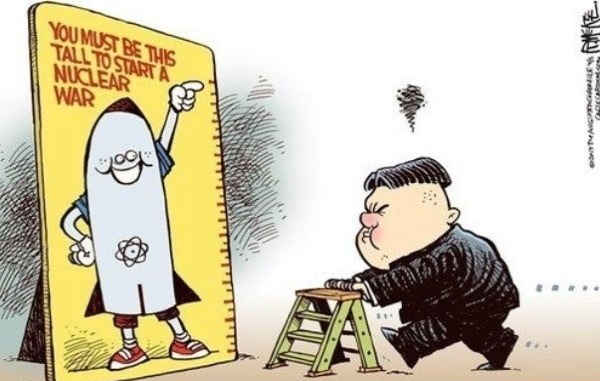 Now it seems that rumours says that Russia going to deploy 150000 troops in Syria , I cant confirm this but there are indications,
Can we correlate those two with eachother ?

has conscripted 150,000 new troops into the Russian army as the country unleashed a new wave of airstrikes in Syria - while and Iran and Islamist group Hezbollah prepare for a major ground offensive. Hundreds of Iranian troops have arrived in Syria over the last ten days, backed by the country's Lebanese allies, Hezbollah, and rebel fighters from Iraq and Afghanistan, two Lebanese sources claimed today.

There's allot happening and doesn't looks pretty it's gd pitfall if you ask me?

posted on Dec, 1 2015 @ 04:38 PM
link
The build up of ground forces definitely brings things that much closer to conflagration...that news makes me feel uneasy.

Threats from Lil Kim, lol those just make me laugh. Either Lil leader is on some smoking good meds, or I don't know what...lol nuke Turkey.

North Korea has an estimated 20 warheads and their Taepodong 2 missile has a range of up to 9,300 miles.

For some reason I cant add images, but here is the link to a pic showing their missile range.

North Korean Missile Range
edit on 1-12-2015 by SergeantSmoke because: (no reason given)

Someone needs to shove a nuke up Kim Jong-un where the sun don't shine. He's a little boy trying to flex his muscle among the big boys. It may come back to bite him.

If he continues to throw threats, someone is going to shut him up. I hope sooner than later. The world has enough psychopathic leaders to deal with.

posted on Dec, 1 2015 @ 05:51 PM
link
Beware of the great Kim, he`ll nuke ya if you mess with him or his friends...but it looks like his rockets can`t reach Turkey so I think this is just empty threat as usual. 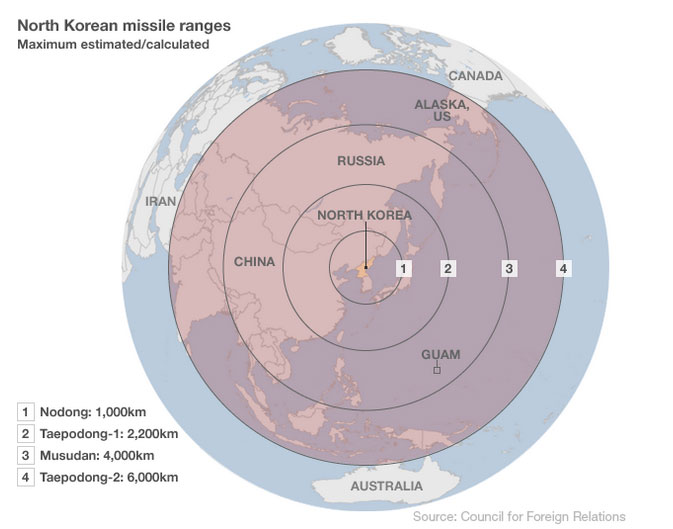 Your pic contradics what SergeantSmoke posted just above. Now which is the correct range? Yours or Sergeant's?
edit on 1-12-2015 by InnerPeace2012 because: (no reason given)

posted on Dec, 1 2015 @ 06:08 PM
link
a reply to: SergeantSmoke
So his treat could be taken seriously, he just wants to sit at the table playing the big blind ..

Well the max KNOWN range can be reached by Taepodong 2 which is 6000 km.

However, some believe they already have new version Taepodong 3 but have not tested it yet. It is speculated that it could reach up to 8000 km...which is still not far enough to reach Turkey but who knows...

originally posted by: Op3nM1nd3d
a reply to: InnerPeace2012

Well the max KNOWN range can be reached by Taepodong 2 which is 6000 km.

This is old data ... they've managed to put a satellite in orbit ... so they probably can exceed that range.

posted on Dec, 1 2015 @ 08:56 PM
link
The apple doesnt fall far from the tree. How many countries and how many times have insane father and idiot son managed to threaten with this.They have no nukes. They take tons of regular cordite , tnt , bury underground. Then they set it off . That is their "nukes"
He might want to be careful. Someone may take him serious one day. Do unto others before they do unto you...no wait , take him serious ? Freakin impossible.

originally posted by: BlueJacket
The build up of ground forces definitely brings things that much closer to conflagration...that news makes me feel uneasy.

Threats from Lil Kim, lol those just make me laugh. Either Lil leader is on some smoking good meds, or I don't know what...lol nuke Turkey.

Awwww......poor itty bitty baby wants to play with some big boy toys (aka nukes)? Something tells me that Putin can handle this just fine without his "help."