page: 1
63
<<   2  3 >>
log in
join
share:
Kantzveldt
+29 more
posted on Nov, 29 2015 @ 03:59 PM
link
I did a thread on this at the very start of the year here, i noted then that they'd actually been rediscovered two years previously, so investigation has been going on there for three years with very little information forthcoming, but this was said recently;

An underground city found in Turkey’s touristic Cappadocia will “rewrite the history of the city,” according to the mayor in the Central Anatolian Nevşehir province, adding they had discovered people had permanently lived in the underground city, unlike other cities which were mostly carved into rocks for temporary protection

What they are suggesting now is that this city was built for underground habitation and is considered to predate the Hittites, thus over around 4,000 years old


Stating that the unearthed tunnels and spaces were different than other underground cities across the world, Ünver said ancient people had lived there permanently.

“This is a real underground city where they resided permanently and not like other underground cities where they had lived temporarily,” said Ünver. “We are definite that we will also reach very important information and discoveries regarding world history.”

The mayor said they planned for the opening of the first part of the underground city excavations in 2017, adding the digging was conducted under the guidance of archaeologist Semih İstanbulluoğlu and the control of the Culture and Tourism Ministry.

İstanbulluoğlu said they predicted the history of the underground city to date back to even before the Hittites, adding this information would be confirmed after the finalization of the excavation’s laboratory work.

They still only show images from around the entrances, they've recovered artifacts but no pictures of those, i suggested in the first thread there were things down there they might like to manage release of information wise, things that would rewrite history, still don't trust them.

He added they had found tobacco pipe-like objects made from meerschaum, adding they could not yet date them with certainty.

“These can give clear information about the history of mankind,” İstanbulluoğlu said.


A Meerschaum pipe is a smoking pipe made from the mineral sepiolite. Meerschaum German for foam of the sea is sometimes found floating on the Black Sea and rather suggestive of sea-foam

I remember you introduced us/me to this find loooong ago. It is great to get an update. So often we get flashes of great finds only to have them never make it back into the media. Thanks for the Sunday reading!

Wow! Great find! Thanks for the update. There seems to be a lot of ancient underground developments in Turkey. 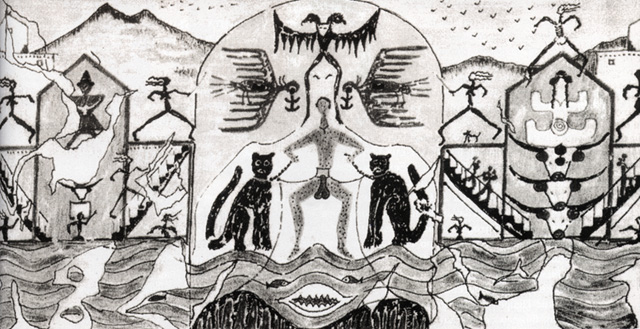 I only wish there was a lot more information forthcoming, there should be after three years since discovery and almost a year since the major announcement.

I know there is a potential there to change history for many..One question though that keeps on bugging me regarding this new information is that,

A nursery for breeding a specific line?

Interesting! I wonder if it was for climate comfort. Underground tends to stay a more stable temperature. Who lived there could be quite interesting, especially if it's a group not well known.

Like i said i don't think they could put a name to any group that constructed there before the Hittites, initial reports were of complex subterranean projects involving reservoirs and fountains and such, connected to water sources connected by tunnels kilometres long.

Yes that's my understanding, i dreamt of those places before i ever heard of or saw them.

posted on Nov, 29 2015 @ 07:26 PM
link
I'd love to visit those underground cities. Seeing how Osama Bin Laden lived in a mountain cave complex (with electricity, lighting, ammunition bunkers, offices and bedrooms) makes me wonder how these people lived.


On another topic, I always thought the Hittites were the predecessors of the Roman empire. First of all, the Hittites existed before the Romans did, and their empire was built on a strategy of building high defensive walls, secure water supplies through lakes and ponds and military training. But their empire suddenly disappears due to peace treaties signed with the Egyptians and other tribes. One side of the empire wanted peace, the other wanted to continue with war. But they suddenly disappear leaving absolutely nothing behind. At the same point in time, the Roman empire suddenly starts flourishing. Rome was founded by two brothers who fight each other, and one kills the other. If they had been humiliated by the Egyptians what better way to get round a peace treaty than to become a new civilization, locate to a closer and more strategic location, then build up your armies that way.

Yes, definitely. It takes an incredible amount of work to create "negative space", carving in edges, removing blocks, sweeping away dust. Then you wonder how many other people have been there. What did they use that space for.

One of the parks we used to play in, had a pair of pillbox gunposts (octagonal concrete shelters). We once crawled in one and saw that there were two concrete slabs that seemed to block off access tunnels going down. Always wondered where they led to....


He added they had found tobacco pipe-like objects made from meerschaum, adding they could not yet date them with certainty.


Woah woah hold up there pilgrim Tobacco pipe?? or are they just using the term tobacco as a catch all for a smoking implement.
Oh never mind it said tobacco pipe-like objects, phew that popped out at me for a quick sec.
edit on 29-11-2015 by Spider879 because: correction.

Always wanted to go back.. now Im finally in Europe again.. and aint no way im risking Turkey at this time.

Great up-date.. star and flag for you.

I did a double take on that line myself lol. I think the most likely use for them would be raw opium. The Sunerians were using opium at roughly the same time period (4 KA BP ) and called it Hul Gil, 'Joy Plant'. They in turn passed it on to the Assyrian so given the lengthy history of the region with the plant it's a pretty fair hypothesis. Not that cannabis hasn't been used since before the end of the LGM, but poppies seem to me a more logical application based on the history of its use in the region.

Derinkuyu was discovered in 1963 in Capodocia, and its underground location mentioned in a myriad of different books and films since then.

The underground city at Derinkuyu has 18 stories that descend far into the Earth. Sophisticated shafts, some as long as 180 feet, provide ventilation to the complex’s multitude of residences, communal rooms, tunnels, wine cellars, oil presses, stables and chapels.

The city also has numerous wells to provide fresh water. So many, that most scholars agree that Derinkuyu could have easily supported as many as 20,000 people.

It is widely presumed that the city was part of a larger complex; in support of this, many point to a commonly-believed rumor that a tunnel extends from Derinkuyu to its sister underground city, Kaymakli, some three miles away..."

originally posted by: Spider879
a reply to: peter vlar

To my knowledge, there isn't anything discussing addiction in reference to opium in Mesopotamia. Kamtzveldt might be able to give you a better answer to that though on the chance I missed it somewhere. To the best of my recollection, there are tablets clearly depicting images of opium pods as well as cultivation and how they collected the sap for processing (it was done during the early morning). I know that in addition to religious uses, it's was used medicinally as well as for executions when mixed with hemlock as it was a quick and relatively painless way of putting someone down. I've got a couple of books I'll look through in the morning and I'll see if I can find a more definitive answer to issues with addiction and personal use but I think most of my Mesopotamia literature is from Kramer and while the quality of his work, particularly his translations, was exemplary, I don't recall hi, touching on this subject. Somebody has to have a more definitive answer and I'll be damned if I don't find it now haha

originally posted by: peter vlar
I don't recall hi, touching on this subject. Somebody has to have a more definitive answer and I'll be damned if I don't find it now haha

If there were any addicts they wouldn't be around for long, public intoxication was a Capital offence
Especially for the young